This week the CPI index in the U.S. hit a new high for this cycle with a 4.2 percent gain from a year ago.

Most central bankers claim that they are happy to see inflation move higher, as they want to stimulate the economy.

But economists for decades have been trained to focus on inflation expectations, a measure which is hard to reign in once it starts to move higher.

Can central banks keep interest rates below 1 percent with inflation above 4 percent?

Central bankers have an exaggerated view of their power to pull levers and control the economy. Many academic studies have shown that central banks are followers on interest rates and inflation, as opposed to their image as leaders who set the course of those variables.

One of the most disturbing anomalies in the central bank universe, which operates to a large degree outside of the “real” world, is the impact of rising house prices on CPI.

The largest component of the CPI index is shelter, in Canada and the U.S. But the CPI index does not include the price that people actually pay for houses. This is how, in Canada, house prices were able to make gains year-after-year at over 7 percent, while the CPI remained below 2 percent for the last two decades. Quite remarkable given a house is the most important purchase that Canadians make, except for the super-wealthy!

This allowed policy makers to keep pushing housing as an economic stimulant.

Here is an excerpt from Statistics Canada, showing how Statcan calculates shelter cost, which is the largest component of CPI at about 27 percent.

“The basic principle is to treat homeowners as if they were renting their own dwelling”.

This approach avoids shelter inflation when the resale house price index is rising rapidly. Some countries use “the net acquisition approach” but Canada chooses to use the “rental equivalence” approach, which vastly understated the increase in the cost of housing, especially in Toronto and Vancouver. In this method, a decrease in mortgage interest cost, which allows the new buyer in housing to pay more for that first home since their monthly payments go down, actually lowers the CPI. So as mortgage interest costs declined and house prices soared, the CPI shelter component was pushed lower by interest rate declines. 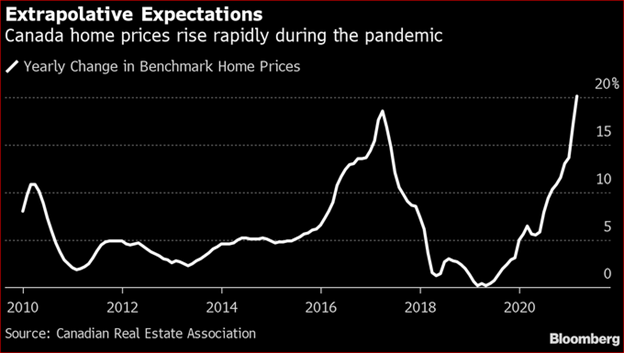 Now that the CPI index is rising rapidly due to other components, and interest rates will be following the CPI, shelter cost will be increasing due to interest rates and other cost increases.

The Bank of Canada and Federal Reserve will be forced to raise rates, unless central bankers are willing to let inflation expectations get out of control.

Given that Canada’s private sector is the most indebted in the world, at 220 percent of GDP, these rate increases will hit Canada harder than other countries.

Now, in all likelihood, Canada’s central banks and other policy makers will have to deal with the fallout from a major debt crisis in the private sector.