The Bank of Canada risks a taper tantrum

The Bank of Canada announced this week that it will reduce buying of government bonds during this pandemic recession. The Bank had been buying most of the bonds issued by the government during the pandemic spending spree which created a $350 billion deficit.

The Bank of Canada now owns 40 percent of all government bonds outstanding.

In 2013 the US Federal Reserve tried to exit a similar quantitative easing program. The bond market threw a tantrum, which became known as the taper tantrum.

Is a taper tantrum coming to Canada?

In 2013 the US Federal Reserve tried to wean the markets off QE and market participants threw a fit.  What went wrong?

It started on May 22, 2013, as then-head of the Federal Reserve, Ben Bernanke, was answering questions before Congress. A Republican from Texas, Kevin Brady, asked the Fed chair when the Fed might start to reduce its QE program. Bernanke said, “We could, in the next few meetings, take a step down in our pace of purchases.” Hardly earthshaking news, as everyone associated with the bond market knew the Fed would not keep buying bonds forever. Or did they?

In 2013 within hours of that verbal exchange the bond markets and interest rates had reacted, with rates rising. Trading volume on the bond market surged to the highest in nine years. Yields rose all over the world.

There was a similar case of jitters in 2011, when worry broke out that a strengthening economy would push the Fed to raise rates, especially if inflation were to move substantially higher. The highest inflation expectations level reached in the past decade was in 2011 when people expected 2.65%. Now inflation expectations are about the same, at 2.6 percent.

Today in Canada the government owns about $340 billion of government bonds, of a total $862 billion. Central banks all over the world have been operating similar programs but no other country has gone this far, except Japan where the central bank owns 46 percent.

In Europe, the ECB has also bought massive amounts of bonds but is not ready to taper.

ECB head Lagarde said yesterday, April 22, “We still have a long way to go for the economy to become sustainable . . . we have to cross the bridge of the pandemic and be able to walk on solid ground.”

In Europe rates are still negative on some bonds. 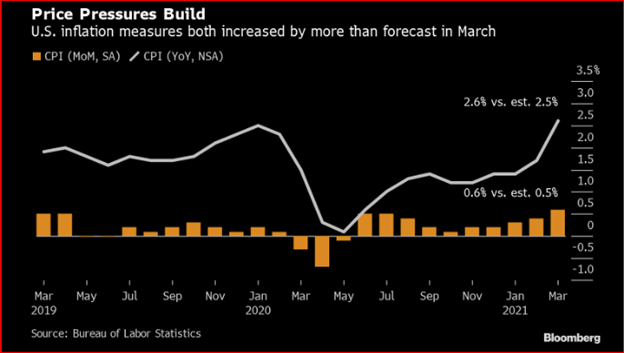 Central bankers refer to the recent uptick in inflation as “transitory”.

However, if inflation does breach 3 percent, and markets think that the uptrend is more than temporary, watch for bond yields to soar.

If the Canadian bond market throws a tantrum and bond yields surge higher, the Bank of Canada will be in a tough spot. Does the BOC cancel the taper and lose credibility? By moving ahead of other central banks the BOC is taking a bold move to test markets.

As the most likely trigger for a more disorderly market reaction, watch inflation expectations as they near 3 percent.