Rapid inflation reared its ugly head this month, as the Consumer Price Index hit 2.6 percent gain for the last year.

The price increase for energy was closer to 15 percent, while food was almost 4 percent.

If the CPI keeps rising at this pace, as some predict, interest rates will rise.

What will central banks do if inflation goes well above 3 percent?

The Consumer Price Index for All Urban Consumers, headline CPI, jumped 2.6 percent year-over-year. Of course, last year in April the price of oil on the commodity futures market hit a record low of minus 37.63 dollars. OPEC, maybe a little terrified, agreed to cut 10 million barrels per day of production.

Because energy carries a big weighting in the CPI that low price caused a low reading for CPI a year ago, at minus 0.7 percent. So it was expected that inflation would show a big gain twelve months later, from what is known as the base effect, that is a very low starting number making this latest observation artificially high. Next month the number will have an even bigger base effect as the CPI with the minus number will be reported in May.

In November I wrote that inflation is the most likely outcome of the conundrum that central banks face with the amount of monetary expansion and fiscal largesse that has been injected into the economy, with more to come if President Biden can get his $1.9 trillion infrastructure bill passed.

Will the Fed have to unwind this during an inflation spike? 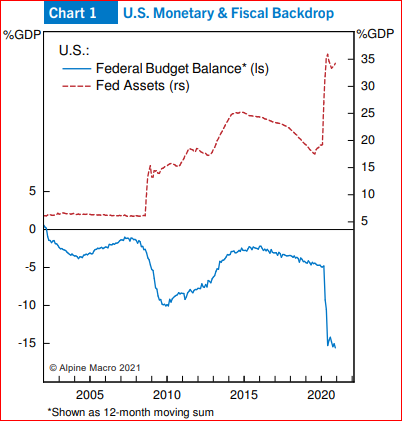 Some economists expect inflation to peak at 4 percent but call it temporary.

Supply chains are more fragile with some items in short supply. Lumber prices have tripled from last year, from $300 to more than $900 today.

Used car prices are soaring because new cars are scarce due to a shortage of computer chips. Containers are hard to find, so shippers are paying premiums to ship their goods from Asia to buyers in North America.

Housing prices are jumping in Canada and moving higher in the U.S. as central banks have flooded the market with cheap money and banks have been instructed to lend aggressively.

All of this adds up to a test for the Bank of Canada and the Federal Reserve. Both are on record saying they would be happy to see inflation move higher and they would let it rise, temporarily, in order to give the economy a boost.

So will these central banks keep interest rates below 1 percent if inflation hits 4 percent?

Or will the market demand much higher rates on bonds in view of the higher inflation rate? My guess is that initially the central banks will do as they promised, but when bond rates soar to match inflation rates central bankers will back down and follow market rates higher.

That will be a severe test for these markets, which are now full of complacency.