The stock market rally on growth stocks that started 12 years ago continued this week.

Value stocks continue to lag growth stocks by the widest margin on record.

Is it time for value to outshine growth again?

Last week I wrote about Berkshire Hathaway and Warren Buffett. Buffett is recognized as one of the greatest value investors of all time and his mentor, Benjamin Graham, literally wrote the book on value investing.

Graham’s first book, written along with David Dodd, is called “Security Analysis” and was published in 1934. I recommend that investors avoid this book, as it is heavy going, even for a financial analyst. A second book, “The Intelligent Investor”, out in 1949, is not much easier to read. But Warren Buffett studied finance under Professor Graham at Columbia University and credits Graham as his most important influence.

Benjamin Graham started investing in the early 1900s, and like almost everyone else lost most of his capital in the 1929 crash and the bear market that followed.

This experience presumably affected him deeply, and for the rest of his career he concentrated on the search for bargains.

Graham’s method was to value companies as a business and ignore stock market fluctuations. If the company met certain valuation criteria he would buy, regardless of what the stock market thought. Graham called his desired valuation “net-net value”, which means buying a stock with a “margin of safety”. The type of bargain that Graham sought would be very rare in today’s expensive market.

Indeed, since about 1990, the valuation on U.S. stock markets has been elevated to a level that Graham and his followers would have found uncomfortable.

Robert Shiller’s well-regarded CAPE method of valuing stocks shows clearly how the last three decades have been bereft of bargains. 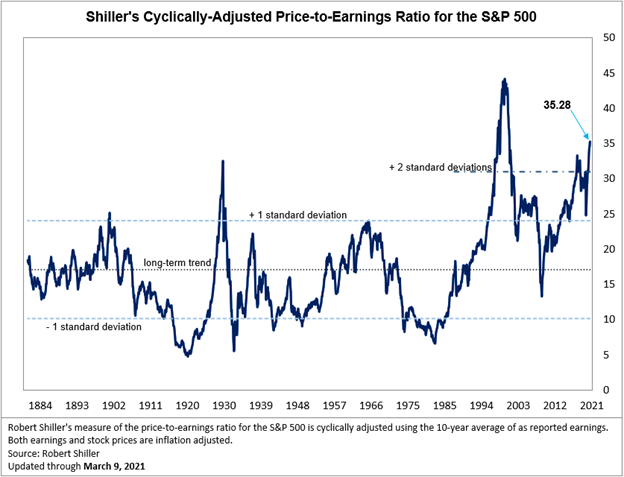 During the 37 percent sell-off a year ago the CAPE fell to about 22, but that was not cheap in value terms. Neither Graham nor Buffett would have reached for the “buy” key.

The last time many companies trading on the market met the strict value investing criterion was around 1982 when the CAPE spent time below 10. Close examination of shows the multiple times when this measure dipped below 10, in 1918, 1932, 1941,1945 and 1982 and stayed there for years. But nothing like that for almost four decades as “growth” investments dominated the market.

Recently GMO LLC examined Value versus Growth and found that Value has never been this cheap, RELATIVE TO GROWTH. Value is not yet cheap on an absolute basis.

Value investing has underperformed growth since at least 2007. GMO says, “we believe that the outlook for Value is exceedingly bright from here”.

U.S. Value defined as the cheap half on market cap within the U.S., including financials.

This chart from GMO which covers the U.S. market shows that Value is now 20 percent cheaper than growth, the biggest discount since at least 2007.

Given the discount that value investments trade at today it makes sense to emphasize those sectors.

Sectors traditionally regarded as Value include energy, financials, health care and consumer staples. But Value is determined on a company level only.