Berkshire Hathaway as an energy play

There are four main investments which he calls the “family jewels”. These are the railway (BNSF), Berkshire Hathaway Energy (BHE), the property/casualty insurance companies and BH’s ownership of 5.4 percent of Apple shares.

Buffett considers the first two as asset-heavy companies, which he calls “giants”, and points out that BH owns the largest collection of “business infrastructure” in the U.S., valued at $154 billion. These assets are involved in energy.

Buffett mentions that BHE will invest $18 billion by 2030 in reworking the electrical grid that transmits electricity in the western part of the U.S.

But BH’s exposure to assets that could be affected by climate change policy initiatives goes much deeper than that. The fact that most electricity is still produced by coal and natural gas is not addressed directly. Buffett is also silent about the role played by BHE and BNSF in transporting those natural resources by pipeline and rail.

Here is the breakdown from BNEF of electricity generation by source with a forecast to 2035 under the existing policy framework: 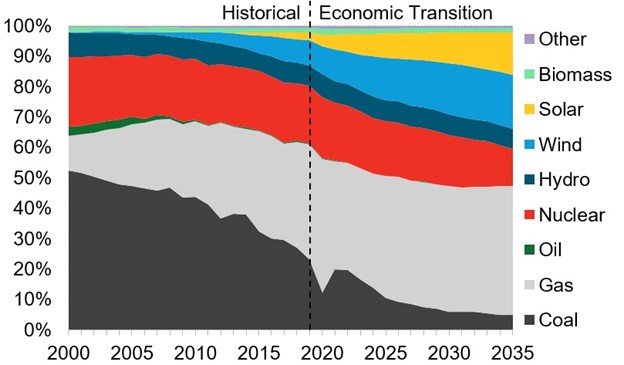 Gas and coal make up 65 percent currently and, without policy intervention, are forecast to drop to 55 percent by 2030. Most of that decline comes from eliminating coal-fired plants (black shaded area). Wind and solar shares increase, while hydro and nuclear remain about the same.

How are BH’s two giants involved?

The railway BSNF is a vast collection of railway assets accumulated over 150 years. Berkshire bought it in 2010, and that was its biggest investment to date.

Railways traditionally carried commodities, like coal and grain, but in recent decades have expanded into intermodal operations which ships containers, and the revenue for ton-mile is much higher than commodities. But coal remains an important commodity transported by rail, generating 13 percent of revenues for BNSF. We expect that most of this coal revenue will fade away by 2035 at the latest.

Berkshire Hathaway Energy generates, stores, distributes and supplies energy. There are companies like PacifiCorp, serving customers in Utah, Wyoming, Washington, Idaho and California. MidAmerican Energy is also a regulated utility selling both natural gas and electricity. NV Energy is based in Nevada and sells electricity and natural gas there.

According to BNEF natural gas accounts for about 40 percent of all electricity production in the U.S. BHE is clearly a big player, perhaps the biggest, in moving this natural gas to power plants that make electricity.

BNEF estimates that wind and solar could replace about 3/4s of all gas-fired electricity by expanding to 1,100 Gigawatts (GW) or 1.1 Terawatts of capacity. To put that into context a typical modern gas-fired plant might produce about 0.5 GWs. So wind and solar would have to scale up by five-fold, adding output equivalent to 1,600 coal-fired electricity plants. But this amount of replacement of natural gas and coal, not shown on the chart, would require massive policy changes by the U.S. government.

Recent 10-K filings show that BH’s investments into wind, biomass, geothermal and solar production total about $34 billion. But that is a small fraction of the assets in rail and BHE.

So, Berkshire Hathaway is vulnerable to a complete phasing-out of coal and natural gas, but it remains to be seen how hard governments will push to end the use of fossil fuels by 2035.