Inflation the most likely outcome

The unprecedented run of increased government deficits continues apace in 2021. Governments and central banks have decided that borrowing for stimulus during the recession is more important than worrying about debt levels.

How does this rapid acceleration in debt get resolved?

I wrote about the inflation risk in November 2020, suggesting that higher inflation might be a consequence of the stimulus and cause a crash in assets prices in the stock market and housing.

Since that time pressure has continued to build with participants continuing to borrow like money is free, and it is pretty close to that, and without regard to the consequences.

Since March 2020 when the 30-year US government bond yield was 0.99 percent, there has been a significant change with the yield moving up to 1.93 percent.

Although that might seem small, the loss to a bond investor if bought near the low in March and rounding off to 2 percent today would be 22 percent.

If bond rates go up further, to the consensus forecast rate of 2.51 percent by 2023, the loss would be another 10 percent, for a total loss of about 1/3 of the value of that bond. Ouch!

Why would bond yields rise when inflation has been so low?

While there are only tiny signs of a bounce in inflation so far, some early warning signs are starting to show that inflation is coming. In the commodity sector: 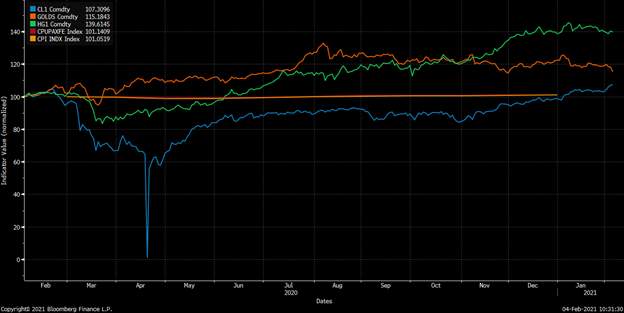 Here we can see that oil, gold, copper are moving well ahead of the CPI.

Rapid debt growth appeared in countries all around the world since the COVID-19 pandemic started in early 2020. Prior to that much of the debt growth had been in the private sector, in borrowings by corporations and households. But now governments have joined the party, in order to provide liquidity to people and corporations who otherwise would have defaulted on their debts. The US and Canada have been out in front.

How does it end?

Default is not an option for government as they can print more of their own currency as long as they borrowed in that currency. For the U.S. government this is easy since the dollar is also the world’s reserve currency. Government default also does not address the issue of private sector debt.

Fiscal austerity, meaning a major cut in government spending, would cause a deep recession or depression, as in the 1930s. If governments tried to reduce spending the private sector would have to borrow more, leading to massive defaults and asset deflation.

Inflation is the easiest route out for any government. If the government puts an artificial lid on interest rates and allows inflation to rise to 3 percent or higher that debt, adjusted for inflation, would shrink in value, making it easier to repay since indebted households and corporations could repay in less valuable dollars.

So this third option, inflation, is the easiest solution for governments as most people would accept it because the impact is hidden, happens slowing over years, and housing might do well if rates stay low.

The problem with option 3 is that investors would take notice and change their asset mix. They would not be willing to hold 30-year T bonds, and the sell-off in the bond market would be a severe shock.

There are no painless ways to resolve the debt issue, but inflation remains a likely outcome.