President Joe Biden plans a serious push into clean energy, with significant acceleration in the adoption of renewable energy in the U.S.

The stock market anticipated a Biden win in November 2020, with shares of most companies in the clean energy sector surging far ahead of the broad market.

One interesting development over the last few years in the renewable energy field is the emergence of politicians who are genuinely committed to a “greening” of the energy sector. Marc Jaccard, of Simon Fraser University, author of “The Citizen’s Guide to Climate Success” talks about “climate-sincere” politicians and distinguishes them from politicians who talk about climate change but are lacking in willingness when it comes to proposals that may cost them votes.

When Biden was running for the Democrat Party Presidential nomination he had to deal with the progressive wing of the party, who are very aggressive on climate change. Joe Biden was the moderate candidate compared to Bernie Sanders and Elizabeth Warren.

Bernie Sanders talks about climate change as an emergency. Here’s a quote: “Climate change is a global emergency. The Amazon rainforest is burning. Greenland’s ice shelf is melting, and the Arctic is on fire. The scientific community is telling us in no uncertain terms that we have less than eleven years to transform our energy system away from fossil fuels.”

With significant numbers in his party taking that view, Biden is in a difficult spot as a moderate.

The challenge is enormous as fossil fuels still make up ~80 percent of supply, according to John Kemp: 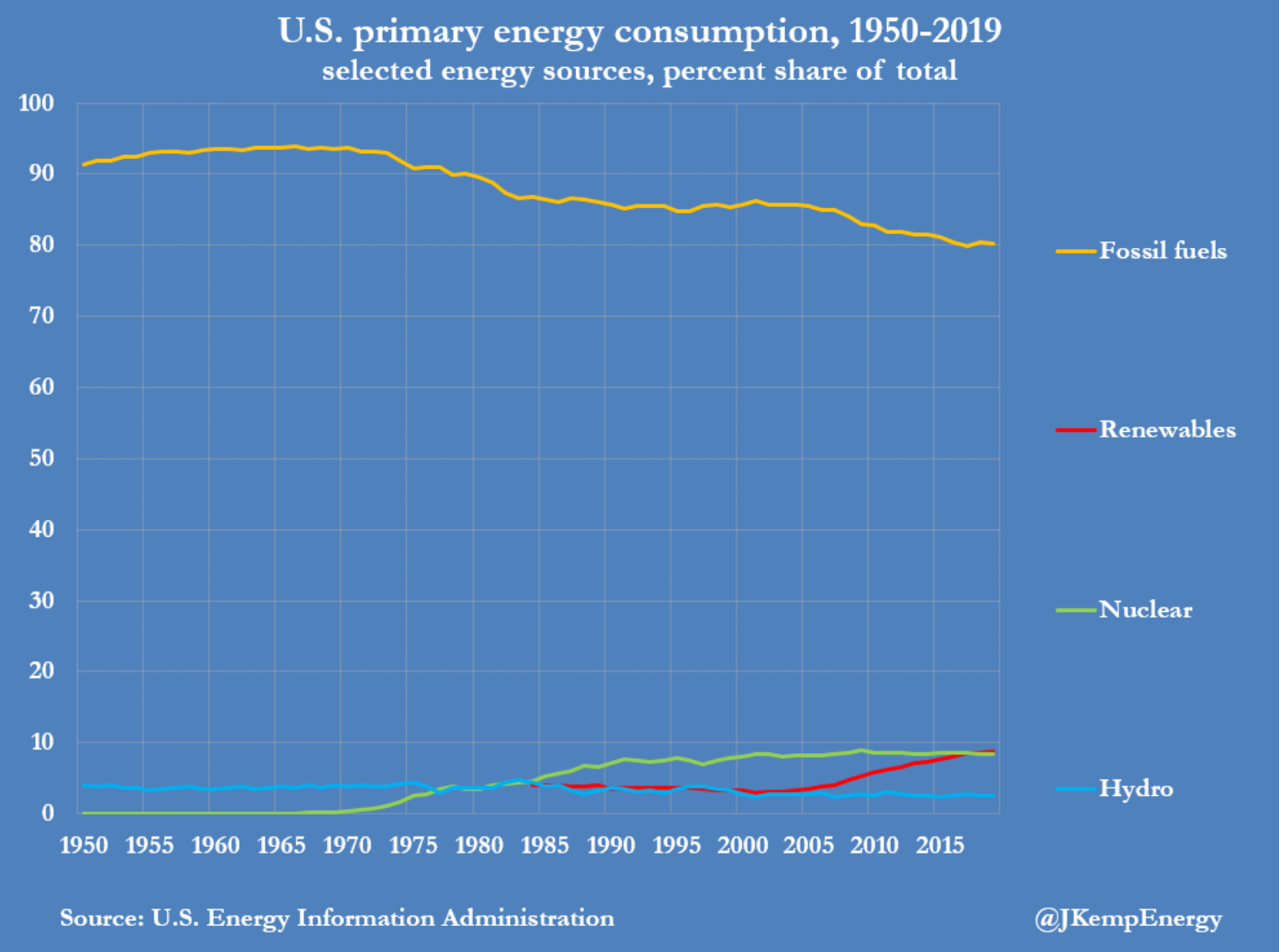 During the campaign for President, Biden adjusted his policies on clean energy to include the removal of carbon from electricity generation by 2035. Most people thought coal was on its way out, and natural gas would be the “bridge” for generating electricity until the sector could go entirely green, perhaps by 2050. But Biden plans to remove coal and natural gas by 2035.

In transport, Biden plans to add new automobile chargers nationwide and financial incentives for consumers to ditch their gas guzzlers and switch to electric. One new policy being considered is an electric car purchase incentive combined with a “cash for clunkers” program to help people dump their ICE cars.

The current tax credit for investment in renewables such as solar, wind and fuel cells will be extended for 3 more years. Biden will push for 8 million new rooftop solar installations, which would double the rate of adoption of solar. Biden will add incentives for stand-alone battery storage installations for times when the sun does not shine, and the wind stops blowing.

Rapid electrification requires a doubling of the size of the electrical grid, and the grid is not in great shape now so many billions will be needed.

Now that wind and solar are cheaper than coal these extra financial incentives could cause a boom in renewable energy.

But Biden needs to get these proposals through Congress, and he has the slimmest margin in the Senate, with a 50/50 split and a tiebreaker vote from VP Kamala Harris. The defection of even one senator would bring his plans to a screeching halt.

In a TV ad Democrat Senator Joe Manchin used his gun to shoot a bullet through the Cap-and-Trade Bill which would hurt coal interests that he represents in West Virginia.

Biden has a very difficult road ahead as he fights interests against clean energy while appeasing those in his party who would end fossil fuels tomorrow.

The outcome of this fight is in doubt.