Investment guru Jeremy Grantham, founder of a major investment firm based in Boston, delivered a warning this week. He says that the U.S. market is in the late stages of a major bubble.

He predicts losses in the stock market comparable to the post-2000 period when the tech-heavy NASDAQ index declined 82 percent over two years.

I met Jeremy Grantham in 2003 when he was a keynote speaker at the annual BCA Research conference in New York City. He started his talk by stating, “I’ve never been wrong.” After a long pause, during which the audience became very uncomfortable, he continued, “I’ve been early.” And the room erupted in laughter. I met him for the first time that day but he was famous for correctly calling the peak in the dot-com bubble in 2000, when he had been about two years early as he made changes to his client portfolios starting in late 1997. In 2006 he was a bit early in calling the peak to the housing market, and the stock market which peaked in July 2007. In his talk that day in 2003 he correctly pointed out that the housing bubble in the U.S. would eventually burst, sending the markets lower.

This time he is calling for another one of those rare corrections that cause major damage as he points out in the article, titled “Waiting for the Last Dance” (6 pages). I encourage everyone to invest a few minutes reading it.

He says, “For the majority of investors today, this could very well be the most important event of your investing lives.”

Grantham explains that he was early in calling a top to the Japanese stock market which peaked in 1989, but his reputation was enhanced when that market entered a 15-year downtrend when his clients were very grateful to be out of that bear market.

His definition of success in calling the top to a bubble is “sooner or later, an investor is pleased to have been out of the market.”

So, it would be wise to heed the warning this time from Grantham. And he even puts a time limit on it, suggesting that this year in “late spring or early summer” or before we will have reached the peak and started a downtrend.

What data are most important to Grantham in validating concerns about a bubble?

Valuation is the key to all his analytical work. Values in the stock market are usually calculated based on earnings, as companies generate profits which belong to the shareholders. He also mentions that the pace of acceleration of the price gains is a sign of the imminent end of the bubble market. The S&P 500 gained 69% recently while the Russell 2000 soared 100% from the March low.

Two measures that he mentions in the article have been included in my Weekend Notes before. Here are the updated versions:

The first is Warren Buffet’s favourite which measures the value of all stocks in the U.S. in relation to the GDP. Since earnings by companies are generated by GDP activity it is hard for earnings to grow faster than GDP. So, when the stock market gets so far ahead of GDP, it is a warning. 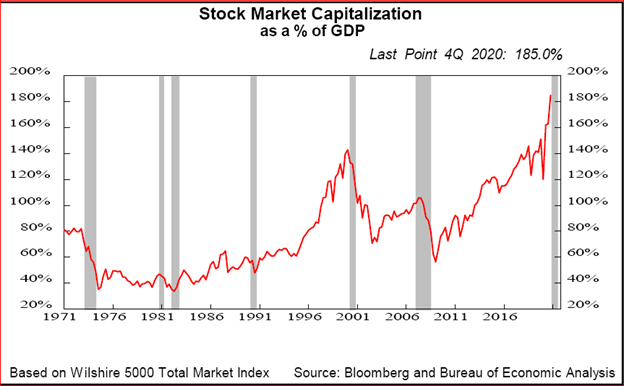 And the Shiller CAPE ratio for U.S. stocks: 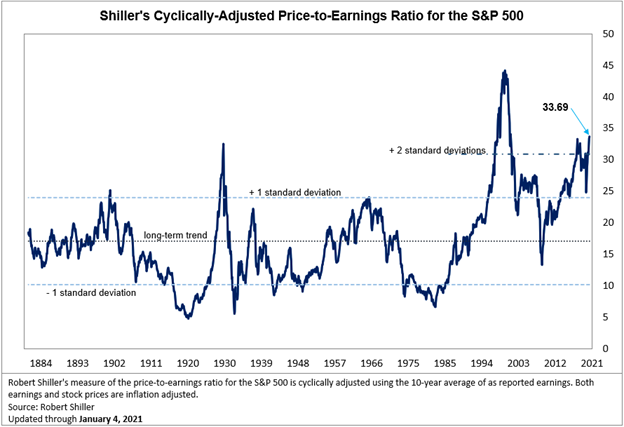 The U.S. market is very expensive. Grantham could be right this time.