A Canadian hydrogen strategy could be a winner

Canada’s new clean energy plan was unveiled on December 11, 2020. The Hydrogen Strategy for Canada came out this week.

Every region of Canada has the potential to produce hydrogen, from several different sources.

The Hydrogen Strategy is part of the Trudeau government’s bold bet that voters will support a clean energy push going into an election in 2021.

Most people are focused on the debate about a national carbon tax. But the Hydrogen Strategy for Canada is a key component.

EU leaders are pushing green hydrogen very aggressively. The EU Hydrogen Strategy plans spending of up to 50 billion Euros just for electrolyzers (used to separate hydrogen from water), plus even larger amounts for clean electricity to run those units. China, Japan and others are active too.

I wrote about hydrogen in July 2020, which can be found here.

Now Canada has joined the bandwagon. Here is an excerpt from the 141-page Hydrogen Strategy: 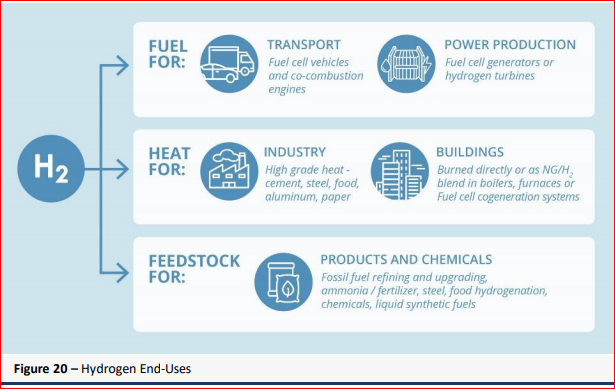 The Canadian oil and gas sector directly employs almost 200,000 people, so those jobs are significant. The total energy sector employs about 832,000.

Canada’s approach will be different from the EU as Canada will use abundant natural gas as well as nuclear power, wind and solar. Canada is the world’s fourth largest producer of natural gas.

Hydrogen from natural gas is called “blue hydrogen” which is not as acceptable to environmentalists as “green hydrogen”.

As Mike Liebreich of Bloomberg New Energy Finance (BNEF) points out, Germany is particularly hostile to blue hydrogen, declaring that “only hydrogen produced on the basis of renewable energies is sustainable in the long term”.

Hydrogen can be extracted from natural gas, but it produces an unwelcome byproduct, carbon dioxide, unlike hydrogen from water. A significant amount of government financial support is needed to make blue hydrogen work as the carbon byproduct must be captured and used or stored.

Shell Canada operates a facility called Quest which uses a technology for Carbon Capture Utilization and Storage (CCUS). Shell says that plant can capture, use and store more than 1 million tons of CO2 per year. Another project, Alberta Carbon Trunk Line, can capture about 1.5 million tons per year.

But blue hydrogen, from surplus natural gas in Alberta, Saskatchewan and northeastern B.C., could be a big boost to an energy industry that is struggling. Governments would be willing to spend billions to make a fledgling hydrogen industry into something substantial.

It will come down to cost. The cost of blue hydrogen depends in part on the cost of CCUS while the cost of green hydrogen requires an abundant, cheap supply of energy from hydro, wind, solar or nuclear power to run the electrolyzers that produce hydrogen. An all-in cost of hydrogen delivered to the market of $1.50/kilogram is the ambitious target. Canada has the ability to produce all types.

BNEF estimates that hydrogen could supply about ¼ of global energy demand by 2050, as the world attempts to reach net-zero emissions. Hydrogen would be especially useful in reducing emissions in the production of cement and steel, replacing coal. The total market for hydrogen could be $2.5 to $11.7 trillion.

Canada’s oil and gas sector might have found a life-saving new venture in hydrogen production.