Canada risks falling behind in the race to build electric vehicles. Decades of reliance on the Big Three U.S. automakers means that Canada may not have any significant electric vehicle manufacturing capacity when most new vehicles will be electric powered.

Is it time for an all-Canadian electric auto?

A report from Clean Energy Canada, of Simon Fraser University points out that Canada is falling behind in auto production.

The report claims that “Vehicle manufacturing in Canada fell by 37%, or more than one-million vehicles a year. Once a global top-five vehicle manufacturer, Canada now doesn’t even crack the top 10.” 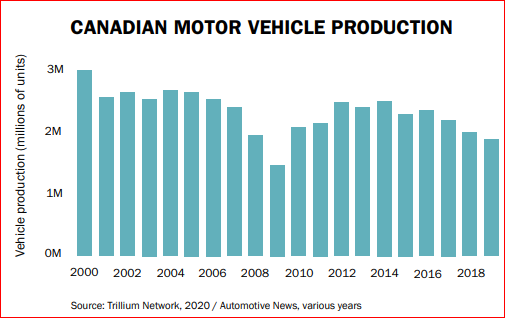 Governments will contribute almost $600 million combined, more than ¼ of the $2 billion cost of retooling the plant.

Ford’s most popular vehicle in North America, the F-150 pickup truck, is also their best-selling vehicle in Canada, at a whopping 57% of all sales. There will be an electric version of that vehicle at some point, but no indication where it will be manufactured.

Fiat Chrysler and General Motors are also making deals to receive funding and to produce some electric vehicles in Canada, but dollar amounts have not been announced yet. Probably the total for all three manufacturers will be from $1 billion to 2 billion.

In 2009 Canadian governments provided an emergency rescue fund of about $13 billion to General Motors and Chrysler as part of their bankruptcy rescue. The results from that massive spend have been poor, based on the major decline in Canada’s portion of North American manufacturing.

Electric vehicle sales globally will soar over the next two decades, according to Bloomberg New Energy Finance.

Electric vehicle sales in Canada are about 3 percent of all new vehicles according to the International Energy Agency. By 2030, less than a decade from now, global sales of new electric vehicles are forecast to be 30 percent of total, and by 2040 as much as 70 percent. This means that Canada has very little time to find a way to produce those electric vehicles domestically. Joanna Kyriazis, a senior policy advisor with Clean Energy Canada elaborates on Canada's slow progress in electric vehicle manufacturing, here.

Recently new vehicle sales in Canada has been sagging, falling steadily even before the COVID-19 recession. 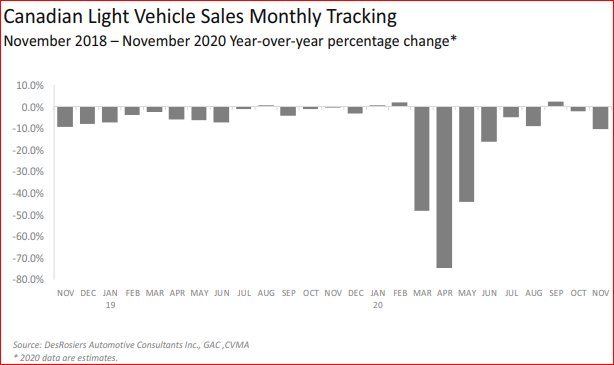 The annual sales rate in Canada dropped below 1.7 million in November 2020.

If a third of those vehicles were electric by 2030 Canada must build about 600,000 vehicles per year to keep pace. The Tesla plant in Fremont, California produces about 350,000 all-electric units. The new plant announced for Austin Texas is expected to cost about US$1.1 billion.

So, for about C$2.9 billion Canadians could finance two new plants, employing about 10,000 people.

Or, even better, there could be an all-Canadian vehicle. There is a project underway, using the name Arrow, that aims to design and build one.

As Fabio Volpe, head of the Automotive Parts Manufacturers’ Association, said recently, “‘Why don’t we do our own car? In Canada, we make every single part of a vehicle for about 20 different [automakers]. So, I said, ‘Why don’t we, from stem to stern, build an all-Canadian engineered, supplied, lightweight, zero-emissions vehicle?’

“Let’s show everyone what Canada can do.” 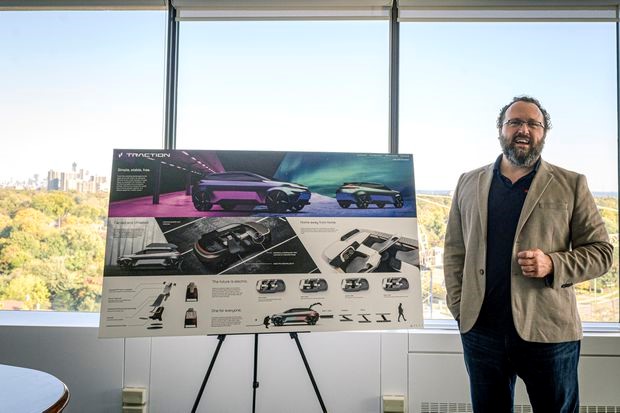 More about the Arrow can be found here. 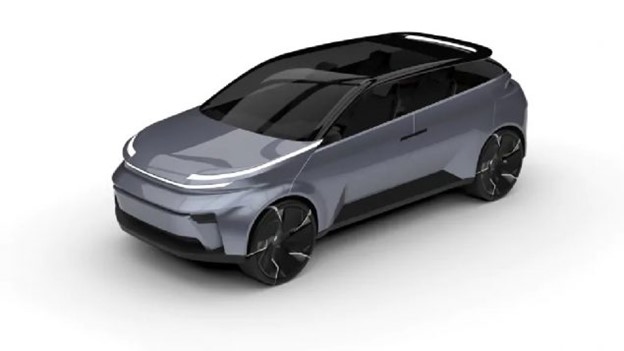 Why not? It beats throwing billions at U.S.-based manufacturers and hoping for the best.