Shopping malls put to the test

The demise of the shopping mall has been a topic of interest for years, but the COVID-19 recession is accelerating those changes.

The move to online shopping was well underway before February 2020 but, now that many people are afraid to go outside, online could be the preferred option. This holiday season will be a major test.

Is there any future for shopping malls?

According to the International Council of Shopping Centers, less than half of people who responded to an October survey said they would return to indoor malls. Of course, this was before the third wave of COVID-19 hit the front page.

Several major chains of retail stores, which act as anchors for shopping malls, have filed for bankruptcy this year, and over the last several years. One recent high-profile failure is J.C. Penney, although some stores will remain open after that firm was rescued by Simon Group and Brookfield Asset Management.

Other companies that have either filed for bankruptcy or closed in 2020 include Neiman Marcus, Pier 1, J. Crew, GNC, Lucky Brand, Brooks Brothers, Ascena, Tailored Brands (which includes Men’s Wearhouse, Jos. A. Bank) and others.

One of the biggest retailers, Macy’s, has not filed for bankruptcy yet but has announced the closing of one-fifth of its stores over the next three years. Others in that same category are Bed Bath & Beyond and Gap Inc. A total of at least 4,200 stores have closed so far this year. Most of these stores acted as anchors for malls.

American Dream, a 5 million square foot mall in New Jersey, is in financial trouble as the Edmonton-based Triple Five Corp has missed debt payments. The mall carries US$1.7 billion in debt and the owners have posted the West Edmonton Mall in Edmonton and the Mall of the Americas in Minnesota as collateral.

Some investors are optimistic about malls. Simon Group and Brookfield Asset Management have placed billions into malls, increasing their ownership as others sell or go bankrupt.

Simon Group (SPG:US) is the largest owner of malls in the U.S. with over 200 properties, including 106 malls, and 190 million square feet of leasable space.

In 2020 tenant vacancies and failure to pay rent have been major challenges for Simon. Income has declined more than 24 percent, while occupancy has slipped to 91 percent. On February 10, 2020 Simon Property Group announced a $6.4 billion acquisition of smaller rival Taubman Centers. SPG negotiated a lower purchase price recently, to about $5.9 billion.

Brookfield (BPY:US) posted a $2 billion loss for 2020 y-t-d. In addition to malls, BPY has a core office portfolio, including buildings in Toronto, Calgary, New York and London, England (Canary Wharf). So, shopping malls are only about half of its assets. Brookfield says that mall traffic has recovered to about 70 percent of normal. 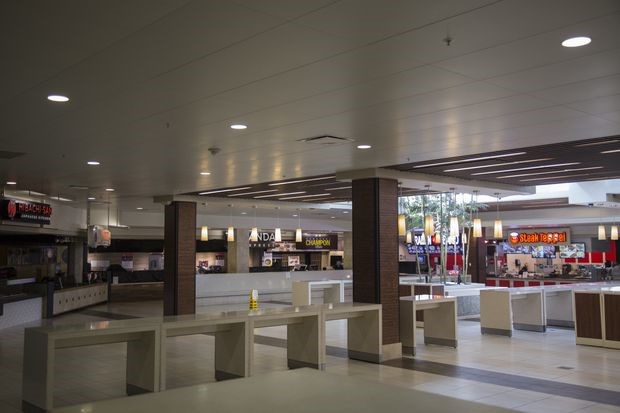 The food court at the Ala Moana Center in Honolulu in May 2020. Source:Marie Eriel Hobro/Bloomberg News

One of Brookfield’s biggest tenants, Gap Inc., is suing to avoid paying rent. The filing says its lease with Brookfield should be terminated as “illegal, impossible and impracticable.”

The shopping mall apocalypse is knocking on the door. That vaccine cannot come fast enough.