A “clean sweep” on November 4 for Joe Biden and the Democrats looks increasingly possible. To get a “clean sweep” Biden would win and voters would give Democrats a majority in both the House of Representatives and the Senate.

What would happen to stock markets?

Jimmy Carter won a clean sweep in 1976, after the Nixon Watergate scandal, and kept control of Congress, both the House and the Senate, in 1978 midterms.

Bill Clinton swept all three branches in 1992 but lost the Senate and the House in the 1994 midterms.

George W. Bush captured all three prizes in 2000 and maintained that control in 2002 and 2004 but lost the House and Senate in the 2006 midterm election.

Barack Obama held the Presidency and the Congress from 2008 to 2010, and then lost the House to the Republicans in the midterms.

Donald Trump/Republicans held all three branches from 2016 to 2018 and then lost the House in the 2018 midterm elections.

When we look at the correlation between the US stock market and election results, we get better stock markets with a Democrat as President. In the special case when there is a Democrat in the White House and Congress is divided between Democrat and Republican control or held by Republicans, the stock market produces even better returns.

For example, Bill Clinton’s first and second terms were great for stock markets and during his last six years Congress was controlled by Republicans R (headings are Senate/House/President): 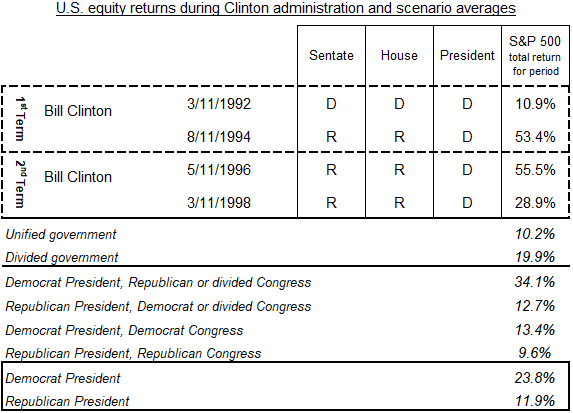 The average market return under a Republican “clean sweep” is just 9.6 percent, much lower than returns when Democrats control all three branches.

The best average stock market return happened under a Democrat President and divided Congress at 34.1 percent compared to 13.4 percent when Democrats held all three branches.

So, if Biden/Democrats win a “clean sweep” the stock market is likely to perform well but not as well as during the Clinton years.

The Biden election platform includes about $2 trillion of spending over four years, with an emphasis on green-related projects. Biden has promised to reduce carbon emissions from transport, power and buildings. He has indicated that he will tax carbon production. Biden proposes higher taxes on businesses, by partially restoring corporate tax cuts under Trump, and hiking taxes on income over $400,000 for individuals. He also advocates for an increase in the minimum wage to $15 per hour. Even if Joe Biden wins and Democrats hold both branches of the Congress, there will be a need for compromise because the Senate majority would be held by a slim margin.

Credit Suisse estimates that a Biden “clean sweep” would reduce US earnings by 10 percent and would push inflation higher due to higher stimulus spending. Tax increases could be delayed. Their model predicts better economic growth under Democrats.

Credit Suisse forecasts a 3 percent drop in US equities under a Democrat “clean sweep” although markets tend to overreact after big changes.

The winner could be renewable energy as Biden is likely to extend incentives for wind, solar and hydrogen. Returns in the fossil fuels sector are likely to be weaker if Biden wins, as he has mused about banning fracking, and removing government incentives for the oil and gas industry.

But we saw in a recent Weekend Note that the S&P Global clean energy index was up a whopping 80 percent to October while the Canadian oil and gas index was down 40 percent. It is hard to envision clean energy gaining even further relative strength over oil and gas even with a Biden/Democrat victory.