Clean energy investing outperformed stock market averages worldwide over the past year. The investment crowd is piling into investments related to renewable energy.

Will the clean energy sector continue to outperform?

The performance of clean energy companies like Tesla, Vestas and Enphase has been spectacular this year. Funds that specialize in renewable and clean energy are racking up outstanding returns compared to the S&P 500 and the energy sector in an otherwise difficult year for investors. Many participants are starting to take note, although skepticism regarding renewable energy remains widespread. But traders and speculators, so-called momentum investors, have been forced to add to their positions as the rally continues. 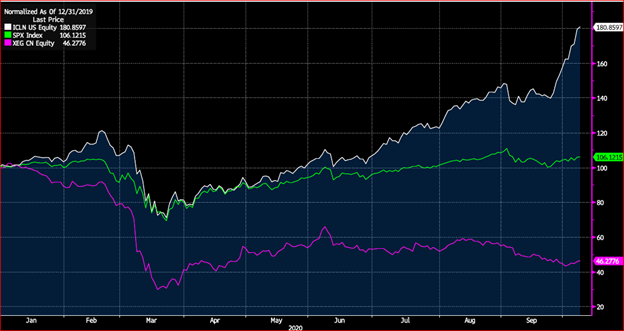 The Ishares S&P TSX Capped Cdn Energy Index (XEG) represents the oil and gas sector. XEG declined by 70 percent in March (purple line) and has recovered to minus 54 percent. The US S&P 500 (green) is up 6 percent y-t-d and the ICLN (white) is up 80 percent.

Pension plans are feeling pressure to add to renewable energy investments. ETFs (exchange-traded funds) specializing in renewables are dominating the investment horizon as they scramble to catch up to the market.

Even giant companies like BP (formerly British Petroleum) are moving billions into clean energy in a bid for survival as the oil and gas sector continues to shrink. By 2050 BP expects to achieve net-zero emissions from all its operations. By 2030 BP plans to grow its renewable power production to 50 gigawatts, the equivalent of 100 coal-fired electricity plants. This will cost about $5 billion per year.

China, the leader in renewable energy, will add 300 gigawatts of solar capacity in the next five years and 150 gigawatts of wind power, but coal consumption will still grow by 2.5 percent annually.

Investors in clean energy will have to look at China eventually. Europe is also advancing rapidly, especially in wind power, while the US is behind, except for Tesla, the leader in electric-powered automobiles.

The largest ETF trades under the symbol ICLN for “Ishares Global Clean Energy ETF”. This fund tracks the 30 companies that are in the “S&P Global Clean Energy Index”. ICLN is up 80 percent year-to-date after recovering from a 25 percent decline in the March 2020 sell-off.

The top ten ICLN holdings, in order of size, are Sunrun, SolarEdge, Plug Power, Xinyi Solar, Enphase, Vestas, Siemens Gamesa, First Solar, Scatec Solar and Boralex. Tesla, much larger than these, is not in ICLN because the S&P has not added TSLA to their index, yet.

Sunrun is $156 billion in market cap while the smallest of that group is valued at $58 billion. The total of all holdings in the ETF is $1.7 trillion.  Tesla’s market cap is $403 billion.

These companies trade at very elevated valuations. For institutional investors this extreme valuation can be ignored as they always hold a percentage of their assets in equities, regardless of valuation. And all the other large S&P 500 stocks are expensive too.

But, as in the 1999 internet dot-com bubble, an investment thesis can be correct, but the stock market can be too expensive. The clean energy sector will not be immune to substantial corrections and inevitable bear markets.

The renewable energy sector will produce great returns for years, but there is a risk of substantial corrections along the way.