The Canadian government, the biggest spender of the G7 countries, rushed legislation through Parliament this week that extends an income support program to those affected by the COVID-19 pandemic. This new subsidy under Employment Insurance (EI) replaces the Canadian Emergency Response Benefit (CERB).

About 4 million people, or 20 percent of the workforce, were receiving help under CERB which paid up to $500 per week. EI benefits will be available to about one-half of those people.

Are heavily indebted Canadians ready for the full impact of this COVID-19 recession?

The end of this CERB program is a good time to look at the level of support provided by the Canadian government. The implication of the legislative changes and support program extensions is that job losses that started in February are threatening to become permanent. Services, especially hotels, airlines and restaurants, are suffering a degree of revenue decline never seen before. Lenders, mostly banks, will experience soaring levels of defaults and impairments, although none are forecasting that yet.

Bill C-4 passed with unanimous consent, which is unusual considering the hundreds of billions of dollars involved. The Conservative Party made noises about not supporting the bill after last week’s Speech from the Throne but came around, in the end, to give their full support. The NDP pressured the Liberal minority government into expanding the cost of the program by demanding the benefit be maintained at $500 per week, up from the proposed reduction to a maximum of $400 per week.

About 500,000 to 800,000 Canadians will have no replacement program after September 27, according to David MacDonald of the CCPA.

Other support programs announced in March 2020, which included mortgage payment deferrals as their largest item, start to expire this week also. Loan payment deferrals did not cost the government any money, yet. But the six-month deferral of mortgage payments has not been extended, so Canadians will have to resume paying soon. Since Canadian households are among the most indebted on the planet, with average debt of about 100 percent of household income, the resumption of payments is going to be a challenge. Auto loans, personal loans and credit cards also were eligible for short-term deferrals, although the amounts involved were much smaller. Self-employed people also received support as well as businesses who were offered a wage subsidy to pay their employees.

This chart shows only CMHC-insured mortgages which were deferred: 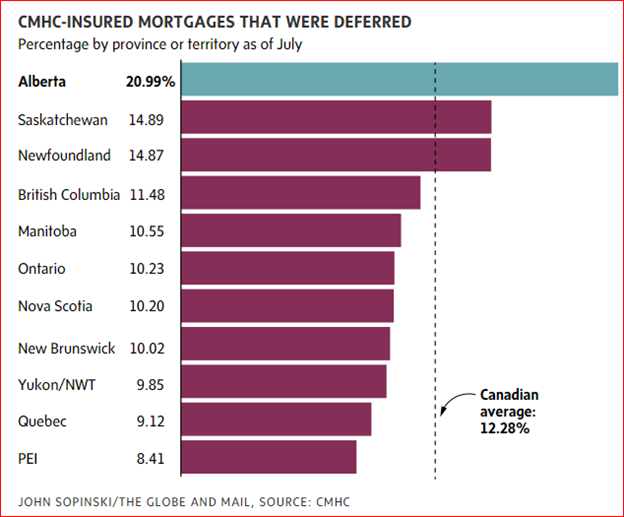 Source: The Globe and Mail

According to the CMHC about 1 million mortgages are deferred, with $1 billion of payments per month.

Lenders are putting on a brave face, saying the “vast, vast, vast majority” of borrowers have resumed payments without problems, according to Bank of Montreal’s CFO Thomas Flynn at a September 15 conference.

The largest Canadian lender, RBC, also struck an optimistic tone. CFO Rod Bolger said, “we’re not looking at a big spike in foreclosures”, speaking at the conference. Despite these pronouncements, banks’ share prices have been weaker than the market recently.

TD’s CEO Bharat Masrani is worried, saying that “the longer it goes, the more difficult it becomes”.

The reality is that bank CEOs and CFOs have never seen anything like this before, at least not in their careers as bankers.

An interesting wrinkle of income support and loan payment deferrals is that most households had an increase in disposable income during the last six months as there was no income tax deducted at source for CERB and some were living free from mortgage payments.

This unprecedented recession will be real for millions of Canadians only after income support programs are modified, and loan payment deferrals expire.