The U.S. election will hurt the stock market

The U.S. election on Tuesday, November 3, 2020 looks to be a watershed event. The incumbent, Donald J. Trump, is weaker in the polls than most presidents seeking a second term.

A change in government, especially if the U.S. Senate majority switches, will have a major impact on policies that affect investors.

What can investors expect after November 3?

What are the chances that the government and the White House switch to Democrat control in November?

Although it is normally considered to be a waste of time to look too closely at forecasts prior to Labour Day, this election is unusual in that the polls, provided by 538 show that Trump’s approval ratings are lower than most incumbents seeking a second term at 43 percent approval versus 54 percent disapproval. This survey was taken August 16-18. Few if any presidents seeking a second term have succeeded at such a low approval rating.

So, it is timely to consider what impact a change in government would have on the investment world and especially the U.S. stock market. The U.S. stock market this week set a record high, marking an unprecedented 50 percent rally in stock prices during a recession.

The stock markets of the U.S. have been driven higher by low interest rates, low corporate tax rates, massive share buybacks and the willingness of people to speculate in stock markets which has been called the “speculative urge”. In a world where cash pays zero, or in some instruments even less than zero, there is a strong incentive for investors to reach for higher returns and ignore the risks. Returns on stocks have been much higher than other instruments, even allowing for the severe correction in March 2020 due to the COVID-19 pandemic.

How would a change in government affect stocks?

First, a Biden victory is unlikely to have much impact on interest rates. No central bank in the world, and especially not the U.S. Federal Reserve, is going to increase interest rates during the worst recession since the 1930s.

Second, corporate tax rates would increase. This would impact the earnings per share of listed companies, which are reported in after-tax dollars. As we saw in last week’s Weekend Note the ratio of stock prices to earnings is at record high levels, even higher than 1929. So, a Biden victory could impact earnings and stock prices if Biden raised taxes on corporations.

Biden proposes an increase in income taxes on individuals making more than $400,000 and in increase in the corporate income tax rate from 21 percent to 28 percent.

For corporations he proposes a minimum tax of 15 percent if their regular tax rate is less than that.

These are the Biden tax change proposals with the biggest dollar impact as estimated by the Tax Foundation.

What about investor sentiment? The “speculative urge” for U.S. stocks could be hurt by a Biden victory. 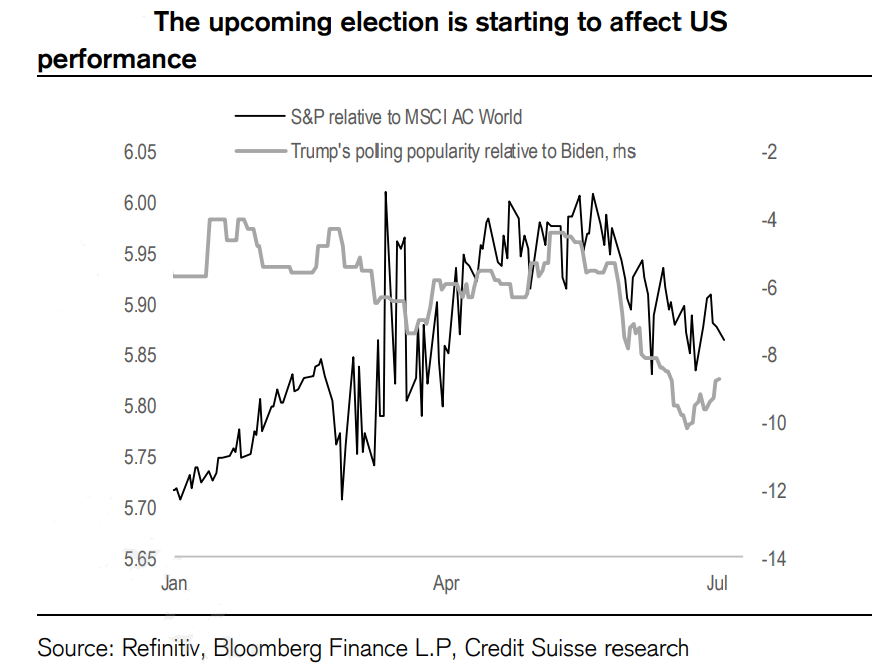 Since April, lower approval ratings for Trump are highly correlated with U.S. stock market performance versus other markets, shown on this chart as MSCI AC World relative to S&P. When Trump’s approval rating versus Biden hit -10 in July the US stock market slumped.

It is a good bet that a Biden victory would have a negative impact on U.S. stocks. This is another reason, along with extreme valuation for U.S. stocks, to diversify into other markets.