This week the Canadian government lost its status as an issuer of triple-A-rated debt. On Wednesday, Fitch, one of the three debt ratings agencies, lowered Canada’s rating to AA+ from AAA.

Until COVID-19 appeared, the Canadian government was one of the least indebted in the developed world. Over the last two decades, the government debt-to-GDP ratio had been pushed down to about 30 percent.

Now, with much higher spending, Canada’s deficit will soar to levels that have not been seen since World War II.

Canadians are right to be worried about the rapid expansion of the federal government’s spending.

People with high incomes are concerned about possible tax increases, with rumours that the tax on capital gains will be increased from 50 percent inclusion rate to 75 or even 100 percent. The top tax bracket for personal income ranges from 48 percent to 54 percent in most provinces so any increase will hurt. With U.S. politicians like Joe Biden openly musing about making capital gains fully taxable if he wins in November, those worries about tax increases are justified.

While some are focused on how the debt will be financed, others are frightened by the incomprehensible size of the deficits that are coming soon. In this discussion the focus is on Ottawa’s deficit but some provinces, like Ontario, have large debts also.

The good news is that the federal government had reduced its dependence on deficit spending in the 1990s, so the debt-to-GDP ratio was one of the lowest in the world at the start of this recession. As a result, Canadian government bonds enjoyed the rare and highly coveted AAA rating from rating agencies like Moody’s, Fitch and S&P. Australia and Germany, of the countries with more than 20 million people, are the only remaining members of that exclusive club. 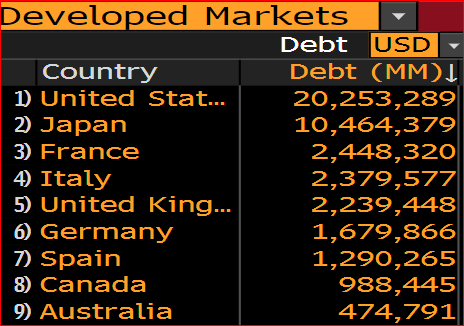 The United States lost its top rating during the acrimonious political debate in the summer of 2011 over the failure to pass legislation to increase the debt ceiling, bringing it close to default.

Canada’s deficits and debts are about to soar, so Fitch’s concern is real. The Parliamentary Budget Office (PBO) published a report predicting a deficit for this year of $252 billion.

To put that in perspective, the 2-year increase in federal debt would be $300 billion, bringing total government debt to $1 trillion, up from $700 billion in 2018. But at $1 trillion in debt, and 50 percent debt-GDP, Canada will be in better shape than during the 1990s, when debt went above 60 percent of GDP. 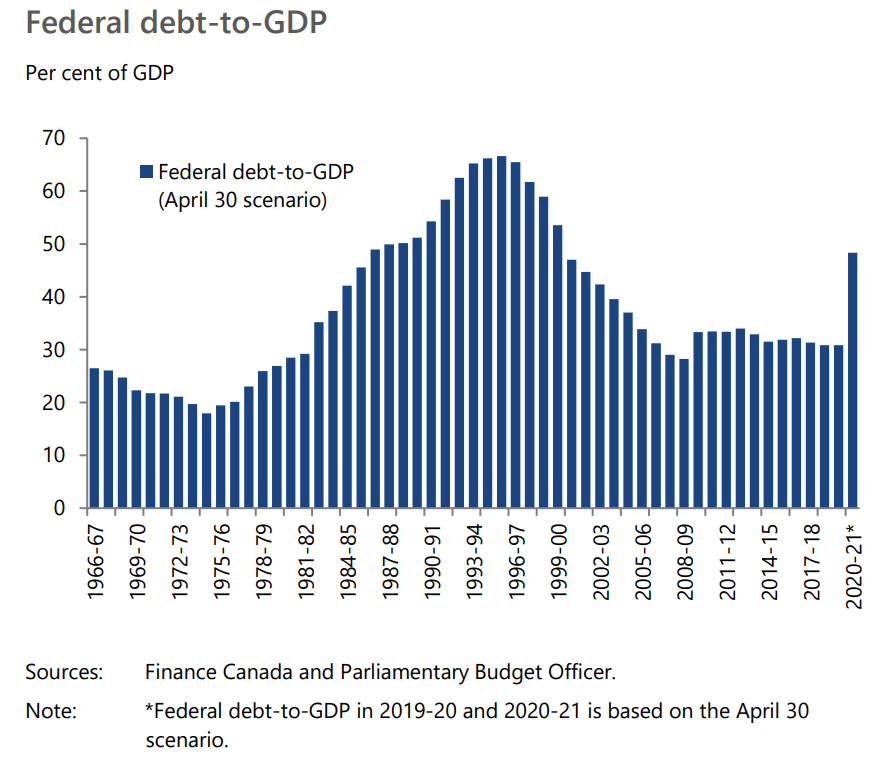 Comparing that to the United States and adjusting for relative population, we find the U.S. debt burden at US$25 trillion is much larger, more than twice as large.

The PBO expects a 12 percent decline in GDP this year. The second-worst decline, since records began in the 1960s, was in 1982, at a rate of 3.2 percent. I remember 1982 with many business failures and families losing their homes. It is difficult to imagine something far worse.

Canada’s GDP is expected to rebound next year, depending on the pace of relaxation of restrictions related to COVID-19.

Canadian GDP will shrink by $240 billion, according to the forecast. Deficit spending will offset, to a degree, the slump in consumer spending and business investment but will not stop layoffs and bankruptcies.

Canada has lost its top debt rating and will no longer be singled out as a good example of financial probity. But the AA+ rating will still allow foreign investors to buy Canada’s debt, just not as enthusiastically as before.