CMHC head warns that housing losses could be huge

Evan Siddall, the CEO of the government’s housing agency, spoke to a parliamentary committee on Tuesday about Canadian housing risks.

The agency he heads insures mortgages for the riskiest borrowers, those who cannot provide a down payment of at least 20 percent of the home purchase.

Siddall suggested that the insurer could lose $9 billion on mortgage defaults.

Will the CMHC and taxpayers experience billions of losses from the housing crash?

In “When the Bubble Bursts: Surviving the Canadian Real Estate Crash”, published in 2018 (second edition), I devote a chapter to the role of the CMHC: “Blowing Bubbles: The Role of the CMHC”.  Here is the epigraph:

“CMHC’s dominant role concentrates a significant amount of risk in public finances. The government guarantee may distort bank lending in favour of residential mortgages … creating inefficiencies in resource allocation. It may also expose taxpayers to more risk than is necessary for a liquid and efficient market.” This a quote from the OECD Economic Surveys: Canada 2014.

Although that quote is more than six years old, it is still relevant. The CMHC’s loan guarantee, which is a guarantee only for lenders but not home buyers, encourages lending to the riskiest borrowers. In Canada about 1/3 of all mortgages are insured by the CMHC, or about $500 billion out of $1.6 trillion of total mortgage debt. Distortion of the market is inevitable.

Without insurance, banks demand about 20 percent down payment on a mortgage loan. About 40 years ago, that minimum was 25 percent, but standards have been relaxed.

In 2006 the Harper government went a step further. They changed the rules to allow the CMHC to provide mortgages with zero down payment and an amortization period of 40 years. This meant that everyone could afford to buy a home, as monthly payments were reduced, and no savings were needed. Of course, mortgage loans soared, and triggered a substantial increase in house prices in many Canadian cities. Later they tightened the rules, but the damage was done.

Now CMHC will have to pay out for claims from lenders, mostly banks, who will want to be paid when home owners can no longer cover their mortgage payments and are “upside down,” where the mortgage amount exceeds the value of the house.

In his presentation and the Q&A, Siddall estimates that house prices will decline by 9-18 percent and CMHC will have to pay out $9 billion to lenders. He also predicts that household debt will soar to 130 percent of GDP from 99 percent recently. 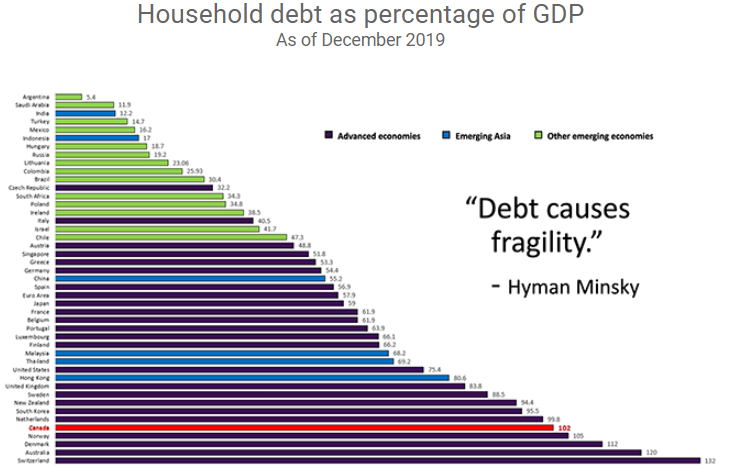 But Siddall is too optimistic about house prices as price declines of “only” 18 percent are very unrealistic. During the Global Financial Crisis, the U.S. experienced house price declines of more than 35 percent, and the 2020-21 recession will be worse than 2009. And CMHC loss of $9 billion are only about 2 percent of insurance-in-place.

House prices need to fall by 50 percent to get prices back to the trend in place before the bubble formed. If that happens, it will be called a crash, and CMHC will have to pay out many, many times that estimate.

Canadians will be unable to cope with the additional debt burden they have taken on. Many will go bankrupt.

Mortgage insurance that encourages lenders to make loans to unqualified borrowers is a bad idea.

A return to the era when people needed a minimum 25 percent down payment to buy a house would be an improvement.

And, next time, let the lenders live with the consequences of the bursting of a bubble that they were instrumental in creating.