An unprecedented shock to world oil markets arrived this week. The price of contract for crude oil in the U.S. fell to a negative price. The contract for May delivery traded briefly at minus 37 dollars early in the week, on the day before the contract expired.

Which entities will survive this recent collapse in crude oil prices?

The prices for WTI went negative on Monday due to an excess of selling of futures contracts heavily owned by United States Oil Fund (USO). 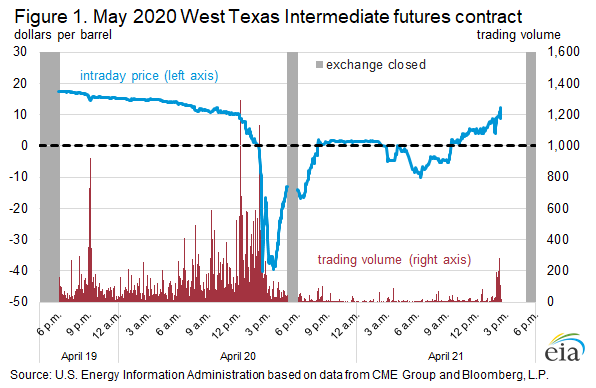 This fund attracts retail investors, most of whom recently came to believe that a rebound in the price of oil was imminent, who added about $1.6 billion to the fund during last week. The ETF managers then were expected to buy more contracts, and now USO owns about 27 percent of the June contract.

The problem with the May crude oil contract is a symptom of the worldwide oil glut. Oil demand, which used to be about 100 million barrels per day (MBPD), is now estimated to be as little as 75 to 80 MBPD, but producers have no idea how to cut that much production. U.S. shale oil producers who have increased production the most, have pushed total U.S. production to a world-leading 14 MBPD. Now those producers have started to go bankrupt due to the low crude price, high operating costs in their fracking operations and unsustainable corporate debts.  On April 1 Whiting Petroleum, a shale producer specializing in the Bakken shale of North Dakota, filed for Chapter 11 with $3.6 billion in debt.

Perhaps bankruptcies will trigger a large drop in production. But will it be enough?

Canadian oil sands producers have also increased production substantially over the last decade, bringing total Canadian output to about 4.6 MBPD. The largest producers in the world are now the U.S., Russia, Saudi Arabia, China and Canada. But only Canada exports several MBPD to the U.S.; about 3.5 million barrels.

The delivery point for the oil represented by the WTI contract is Cushing Oklahoma, a land-locked point that is far from populated areas. There are many large tank farms there, able to absorb about 70 million barrels but most of that storage capacity is full. The U.S. has ample crude storage elsewhere, but not at Cushing. Unfortunately, most of Canadian crude exports go to that part of the U.S., which is like transporting ice to the Arctic given the glut that has developed there.

As a result, the market for Canada’s crude oil exports to the U.S. is shrinking. In a complete reversal from one year ago, now there is too much oil. With new capacity coming soon, pipelines will be able to ship more oil, but the demand might be too weak at the other end of the pipe. 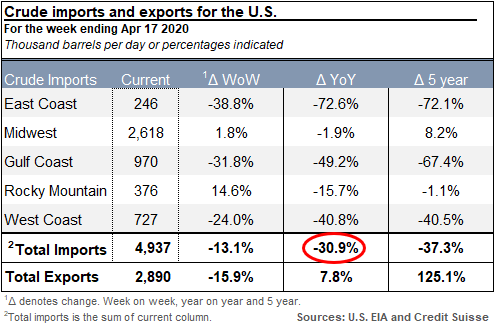 According to the EIA, the drop in imports into the U.S. year-over-year was about 31 percent in early April. If Canada bears its share of that decline, we can expect to see a drop in Canadian exports of about 1 MBPD.

The good news for Canada could be that Texas shale oil production is too expensive, and the oil sands can operate at lower operating costs than shale, especially for synthetic crude operators. With a little luck, some Canadian producers could emerge as winners in this low-price environment. But there is no guarantee of success.