Canadian economy followers received an unexpected jolt last week in the form of a GDP report that fell into negative territory.

The October GDP report was minus 0.1% and adds to the evidence that something unusual is going on in Canada. The November labour force report showed a drop of 71,000 jobs while unemployment jumped by 0.4 percentage points, the largest increase in a decade.

Is Canada entering a recession? 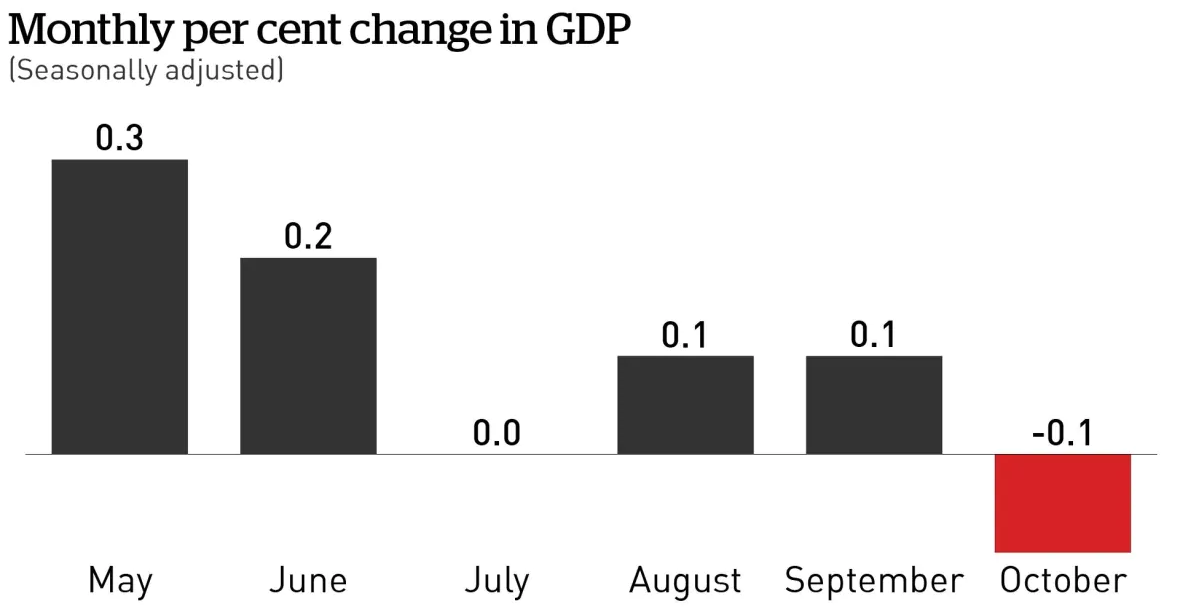 The difference between recent economic reports and those from the late summer of 2019 could not be greater. For example, on August 30 Statistics Canada reported second quarter GDP growth at 3.7 percent, an annualized pace that shocked forecasters.

At that time RBC Economics stated that 2nd quarter results were up, “but details mixed”.  Most reports pointed out that the year/year results were about 1.6 percent, not as strong as the annualized result which generated that catchy headline.

But, about a week later, Statistics Canada reported that Canadian employment grew by 81,000 new jobs in August, making job growth in 2019 the strongest since 2003. Apparently, the GDP report wasn’t just a fluke.

The good news wasn’t all out yet. In the third week of September the government of Canada reported the results of the fiscal year that ended March 31, 2019. The federal government’s deficit shrunk dramatically, from $19 billion to $14 billion. The improvement came from higher-than-forecast growth in personal income tax receipts. The federal debt grew more slowly than the economy, so the Debt-GDP ratio declined to 30.9 percent, another piece of good news.

In November economic data abruptly changed direction. In November, we learned that Canadian manufacturing sales declined in the month of September. Then, retail sales for September also showed a small decline, led by the all-important auto category.

Another November report showed that 3rd quarter GDP slowed abruptly from Q2, at 1.3 percent. The drop from 3.7 percent to 1.3 percent in three months didn’t get as much comment as it deserved.  And an unsustainable jump in residential investment (housing construction) lifted the Q3 growth rate from what could have been a disaster.

The Bank of Canada chose to ignore these signs of serious weakness and held rates steady at its December 4 meeting. Canada’s central bank is the last remaining holdout among central banks as the others are easing monetary conditions, due to widespread fears of a slowing economy. Central bankers are usually reactionary in nature, so the Bank of Canada was taking an unusually hawkish view by not adjusting its stance to the new, weaker data.

A December 6 blockbuster announcement showed that Canada lost 71,000 jobs in November. This report extended the change in tone from very bullish to very bearish.

Retail sales reported last Friday. That number continued the trend to weaker, or negative growth, falling by 1.2% in October. Autos sales were disastrous at negative 3.2 percent month-over-month and negative 1.5 percent year-over-year. Retail sales were 1.6 percent LOWER than a year ago, despite income gains and a record number of new immigrants.

The last monthly GDP report of 2019 came out on December 23, 2019; a decline for October of 0.1 percent. The change in trend from mid-year could not be more dramatic.

The 4th quarter GDP report appears about 60 days from now, in late February 2020. That report likely will show a continuation of the trend, confirming concerns about Canadian economic weakness.

The probability that Canada is already in recession, or soon will be, is high.