Canadian banks face stiff headwinds next year. They will have to deal with increasing loan losses, weak capital markets and slow retail lending. This is the start of a period of elevated risk, as the credit cycle turns.

Should investors reconsider their holdings in Canadian banks?

In “When the Bubble Bursts, Surviving the Canadian Real Estate Crash, 2nd Edition” I devote a chapter to the Canadian banks -- “Banks will survive (but they won’t thrive” -- and explain how Canadian banks have earned their impressive returns. As the recent banks’ reports contained some disappointments, it’s time to revisit the sector.

Canadian banks can earn profits much higher than banks in other countries, when the profits are measured by Return on Equity, or ROE. For example, The Royal Bank of Canada earns ROE of about 17 percent on its overall operations, but a more impressive 27 percent in the Canadian personal and commercial lending division. This unusually high profit is due to the small amount of equity required to operate retail lending backed by housing as collateral. The Canadian retail lending division is about one-half of the bank’s total business.

Investors take this elevated ROE as a signal that Canadian banks are great investments, when compared to banks in the U.S., for example.

One of the comparable banks in the U.S. is Wells Fargo (WFC), a much larger but similar company, which also concentrates on “retail” lending and mortgages. Here’s a chart of ROE for WFC, from Macrotrends:

The ROE for Wells Fargo has remained around 10-12 percent since recovering from the 2008 crash. But we also note that WFC had an elevated ROE, about 18 percent, prior to the crash.

Prior to 2007-08 Wells Fargo could operate with very high leverage in its mortgage division. After the crash the rules changed and now WFC operates with reduced leverage and higher capital.

In Canada the banks operate with high leverage and minimal capital in their mortgage divisions. And they have the additional benefit of CMHC insurance where the risk (and capital) can be close to zero. The overall risk weighting in lending with housing as collateral is very low and the risk weighting determines the amount of capital, or equity, required.

If Canadians get into trouble with mortgages during a recession, the level of equity on balance sheets of Canadian banks may not be enough to absorb the losses.

A 2019 Bank of Canada report makes assumptions about how banks would perform in a severe recession. They assume most losses, about $115 billion, would come from consumer and business loans, not mortgages. The assumption is that people will keep making their mortgage payments, even in a crash where house prices drop 40 percent. Even with that very optimistic prediction about losses on mortgages, bank capital would not be enough to absorb the losses. 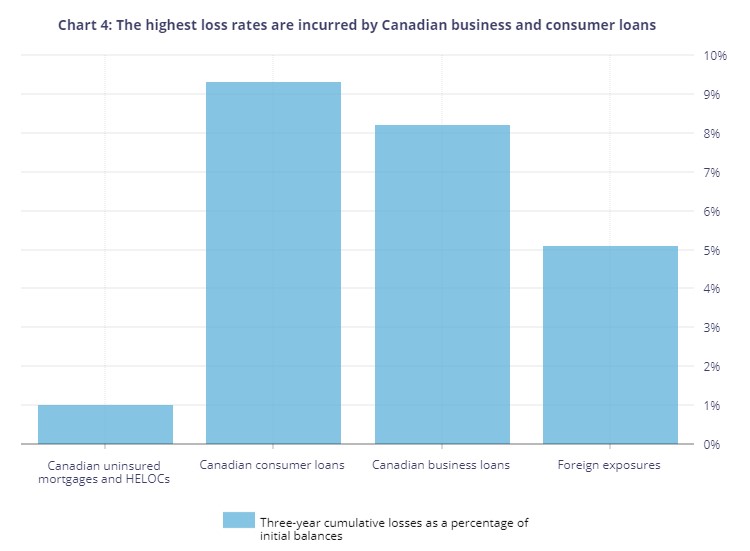 The BOC says that banks have $48 billion annually in profit to restore their lost capital. If the regulator allowed them to breach minimum capital requirements temporarily, they might not have to reduce dividends or issue new shares.

The BOC staff assumes that Canadian banks can enjoy the best of both worlds; operating with high leverage that generates impressive ROE in good times and avoiding major losses on their largest lending product, mortgages, in a severe recession. This scenario seems too rosy.

A more likely outcome after a crash is elevated mortgage losses, a regulatory demand to increase capital by cutting dividends and new rules that forbid elevated leverage to continue after the crisis. All these developments would depress share prices of the Canadian banks.