Saudi Aramco is a gamble on oil demand

The world’s largest company, Saudi Aramco, is proposing to list its shares on the stock exchange in Saudi Arabia. The prospectus issued last weekend, at 658 pages, includes a lot of interesting information about the oil business, the company’s size and value and forecasts for the future of the oil industry.

Is it a good time to invest in this oil company?

Canadian investors are not allowed to invest directly in the initial public offering (IPO) as the regulatory approvals are not being sought in Canada. But info in the prospectus gives us an idea of the benefits and risks of this watershed offering of shares.

According to a Bloomberg article, the ruler of Saudi Arabia, Prince Mohammed bin Salman (MBS) is risking a lot with this sale. The IPO was first proposed in 2016 but has been delayed multiple times.

Saudi Aramco is the most profitable company in the world. The valuation is estimated between US$1 trillion and $2.5 trillion. Revenues are more than $220 billion and profits close to $100 billion annually. 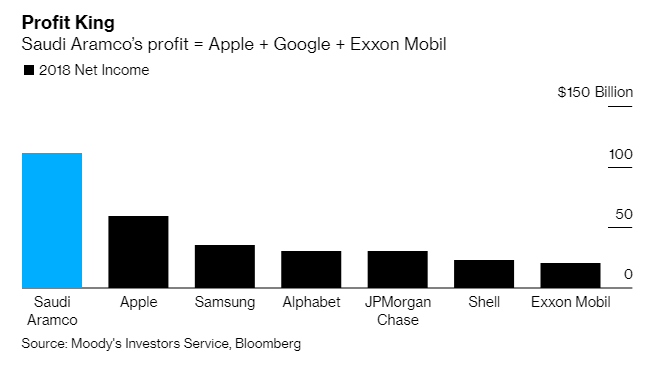 The Saudi government currently owns all the shares. The proposal is to sell a small fraction of the shares, perhaps 2 percent, to institutional and retail investors and to list the shares on the local stock exchange in Riyadh, the Tadawul All Share Index. Earlier plans to list a larger number of shares in London and/or New York have been abandoned.

Prior to this IPO, the largest offering was Alibaba, in 2014 with $25 billion worth of shares sold. Just 2 percent of Saudi Aramco would be $30 to $40 billion.

The potential for profit of an investment in this company depends on many things, such as the future for oil demand, the cost of production, the future of OPEC, the survival of the Saudi regime, the success of the US oil industry and many other issues.

But the biggest question of those is what is the future for crude oil demand?

About 100 million barrels of crude are consumed every day on the planet.

The largest consumers are in the U.S. at 20 million barrels and China at 13.5 million.  India and Japan each consume about 4 million.

About 69 percent of oil used in the U.S., or 14 million barrels per day goes to fuel transport.

So, to determine demand for future sales of Saudi Aramco’s product, the main question is what is the future for gasoline and diesel for transportation?

As electric cars gain credibility worldwide, with sales of combustion engine cars faltering badly in 2019, the demand for gasoline seems likely to decline over time. Tesla and others are already making electric cars with range up to 300 to 400 miles (500 to 700 kilometres) which should alleviate range anxiety. And the cost of electric cars keeps coming down as battery technology improves and manufacturing can be automated more than with conventional automobiles.

There seems to be a growing political will in the world to reduce fossil fuel consumption. If that continues, the transport sector will be under immense pressure to go all-electric. Although this wouldn’t be nearly enough by itself to deal with climate change, transport will be on the front lines of the debate as it is more visible to people in their daily lives than emissions from coal-fired electric plants and agriculture.

An investment in Saudi Aramco is a bet that oil demand will continue at 100 million barrels per day, in the face of growing political pressure to reduce greenhouse gas emissions and fossil fuel consumption.

This seems like a wager with unusually high risk.