The International Monetary Fund cut its forecast for world economic growth for the fifth straight time this week.

Is the world experiencing prolonged stagnation?

The full IMF report runs 208 pages while the Executive Summary is 3.  These reports are not widely followed by stock market analysts, and I normally don’t give them a lot of attention, but this report seems significant in timing as the current economic recovery is now entering an eleventh year.  Eleven years is an unusually long time for an expansion to last.

The report highlights forecasts for slow growth below 2 percent for advanced economies for 2019 and 2020. The weakness in Europe this year and North America next year is the reason for such modest growth. Canada slows from 1.9 percent in 2018 to 1.5 percent in 2019.

The IMF likes to group 4 countries/regions into what they call the Group of Four: China, U.S., Euro area and Japan. This group represents about 50 percent of global GDP. 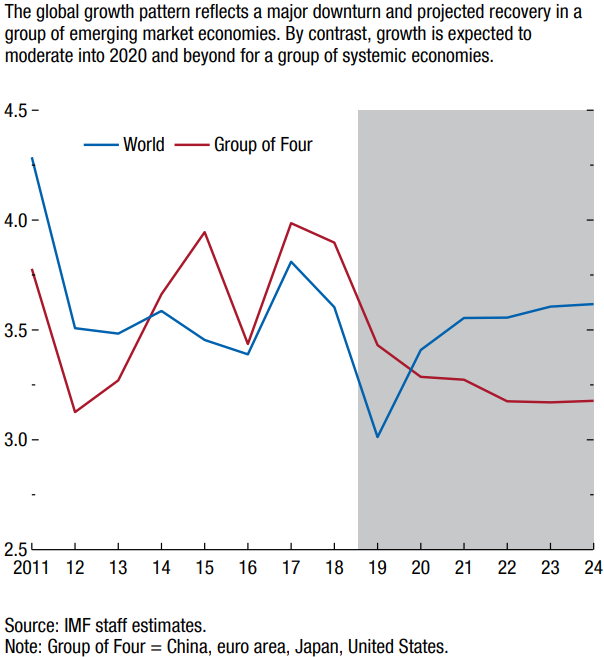 By grouping China with the other 3, the IMF staff shows growth of just under 3.25 percent, with a forecast for more weakness. Without China that group’s growth would be much lower.

The big story is the slowdown in China’s growth. Developed markets have been growing slowly because they must. Conventional economic theory says that real GDP growth, i.e. nominal growth with an estimate of inflation subtracted, cannot be much different from the sum of population growth and productivity improvement. But China has experienced a growth miracle since 1980.

In 1972 researchers at the Massachusetts Institute of Technology (MIT) wrote a paper, which became a book “The Limits to Growth,” based on five factors that determine growth. The model they devised found that growth at 1970 rates cannot continue beyond 2100. But an equilibrium can be reached which would allow humans to live in balance with resources and the environment.

The problem with declaring a “no-growth” economy for the planet is that developing countries, the largest of which are China and India, could not accept the premise. In a few years the continent of Africa will be more populous than China’s 1.4 billion people. Putting a stop to growth at this point would be unwelcome to billions of people who would like to enjoy some more of the material benefits of the developed world as seen in the United States and Europe. Even China, the most advanced of the group, has per capita income of only US$16,000 per person compared to the U.S. at $60,200.

The IMF singles out the slowdown in manufacturing activity to explain their downgrading of economic activity. Rising global trade tensions and geopolitical concerns also contribute to the weakness.

Business investment is key to growth as government and consumer spending is more stable. Outside of a major credit crunch consumers tend to carry on spending, often on borrowed money, to meet their needs and desires. And governments seldom cut back spending. But business managers will delay or cancel projects, new factories, expansion of existing facilities and new hiring if they see any uncertainty. The IMF also released a report on global financial stability, highlighting elevated corporate debt as a major risk. These excessive debt levels might influence managers to scale back their plans.