The next US election will be held on Tuesday November 3, 2020.  It’s probably too early to speculate about who will win.

But markets will soon start to anticipate the outcome so investors might want to think about rebalancing their investments, especially if a substantial change looks likely.

Is there a dramatic shift underway in American politics?

A recent poll showed that Elizabeth Warren is leading the race to become the Democrat nominee in 2020. The decision will be announced at the Democratic convention held in July 2020 in Milwaukee, Wisconsin.

Warren’s lead is remarkable as her platform could be described as “left wing”. Apparently, Democrats are moving to embrace more liberal views.

Joe Biden, a more moderate candidate, slipped from a favorability rating of 82 in December 2018 to 66 last week, while Elizabeth Warren improved her favorability from 64 to 75 over the same period. No other Democrat candidate is close to Warren and Biden. 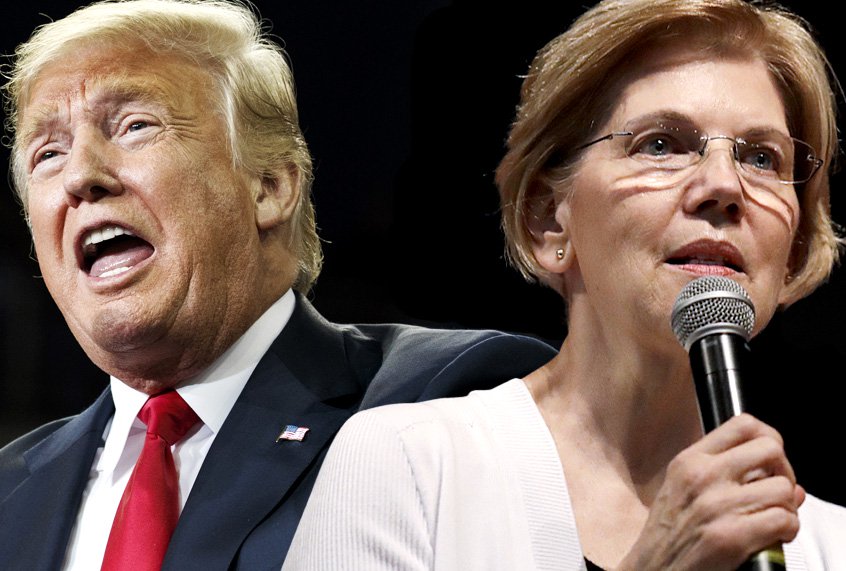 Between Warren and the likely Republican nominee, Donald Trump for the general election, the Predictit website expects Trump to win at 42% while Warren has a 31% chance of electoral success.

But many other polls are predicting that Warren can beat Trump in 2020. According to a CNN survey of polls, including Fox News, ABC, NBC, Quinnipiac et al, Warren beats Trump by an average of 5%, with even Fox News giving Warren a 6% lead.

Warren’s policy platform is aggressive. For example, she would restore the Glass-Steagall Act (the Depression era legislation that severely restricted the banks) and make it easier for individuals to declare bankruptcy. On energy Warren would ban fracking and institute a moratorium on new fossil fuel leases on public lands.

On healthcare she calls for elimination of private health insurance and favors “Medicare for All.” Warren would write off most student loans and provide free tuition for college.

She would institute a wealth tax of 2% on people with over $50 million and 3% on wealth above $1 billion. She would raise the minimum wage to $15.

In summary this candidate is much further “left” than the last Democrat candidate, Hillary Clinton.

Does Warren’s move to the left reflect a shift among American voters?

Women have increasingly identified as Democrat, with 56% leaning to the Democrats.

Millennials are even more likely to support Democrats, with 59% leaning that way.

Among those who are likely to vote Democrat, 46% say they are “liberal” while 37% are “moderate.”

So, Warren’s shift to the “left” might be reflecting a similar move by the voting public.

Wall Street CEOs are worried about Warren and they are right to be concerned. After 2008, she was the instigator behind the Consumer Financial Protection Bureau. The CFPB regulates the offering and provision of consumer financial products and was a reaction to aggressive lending practices revealed after the global financial crisis. Warren’s vision is that the bureau would “ensure that every lender in the marketplace is playing by the rules.”

On September 10, 2019 Jim Cramer of Mad Money on CNBC suggested that Wall Street executives are “fearful of an Elizabeth Warren presidency.” Cramer discusses Warren in a 2:54 clip. 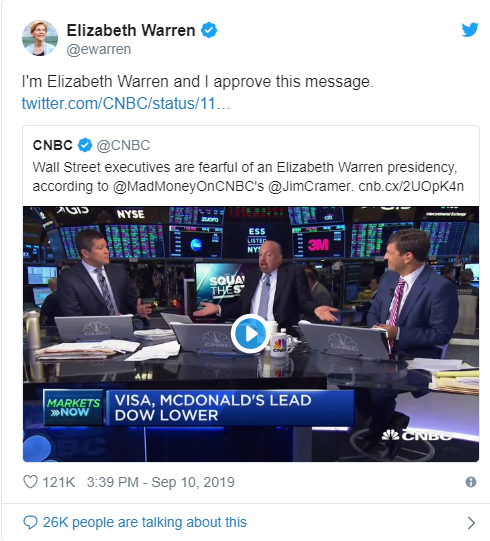 Investors with substantial exposure to the US market would be well-advised to do a review of their investments now, rather than waiting until after the election.