China’s GDP has overtaken the U.S., measured by purchasing power parity. Economic growth in the Middle Kingdom has outpaced the rest of the world for four decades, since economic reforms were instituted in the early 1980s by Deng Xiaoping.

If China’s economy slows, due to the global trade war and other factors, the rest of the world will feel the impact.

Is the era of rapid growth in China about to end?

Deng Xiaoping is known as one of China’s most important leaders of the last century. Deng came into power around 1978.

A Deng saying from the early 1980s is “Let a part of the population get rich first”.

China embraced the challenge of opening a socialist economy to some aspects of capitalism. In 1980 China’s per capita GDP was lower than almost every country in Africa, at $194.80. By 2016 average per capita GDP was $8,117, comparable to countries like Mexico and Russia but still way behind the US level of $57,000.  In 2012 it was estimated that the wealthiest 70 members of China’s National People’s Congress were worth a staggering $85 billion.

So, Deng’s initiative worked well, especially for a small group at the very top.

This expansion in debt, sometimes called the “credit impulse,” finances infrastructure, business investment and residential real estate construction, among other things. China’s credit impulse has been leading the world since the Global Financial Crisis, but, in the last couple of years, the rate of change has slowed. Some have called this credit “helicopter money”. The amount created in China since 2009 is US$21 trillion, dwarfing money creation in other countries. The US, Europe and Japan combined created about US$8.5 trillion.

China’s economy also depends, to some degree, on exports. The US consumer has been a major customer for Chinese manufacturing plants that make everything from smart phones to computers to textiles. The U.S. is the top customer for China’s sales. About $466 billion of exports went from China to the U.S. in 2018. The new tariffs imposed by President Trump affect about two-thirds of these goods. For example, as of September 1, about 87 percent of textiles from China are subject to higher tariffs. On December 15, if more tariffs are implemented as announced, all goods from China will be affected.

The trade war will hit harder in 2020.  Oxford Economics forecasts that China’s real GDP growth will slow to less than 6 percent. 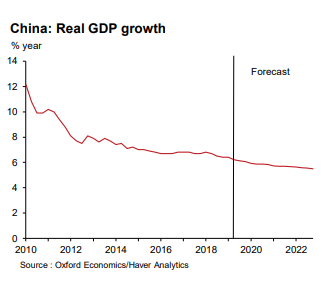 As the chart shows, the 2020 forecast is a dramatic slowdown from the 12 percent growth in 2010. For comparison, the US growth rate since 2009 has been a modest 2.3 percent annually.

A slower rate of growth for China and an expansion of the trade war could mean serious trouble for the global economy. The US economy cannot escape the impact, even though trade is not that important in that country.  If a global slowdown triggers a recession in the U.S. the stock market will be hurt, as stocks listed in the U.S. make up more than 55 percent of the value of all listed companies in the world.