The new UK Prime Minister pushes for a hard Brexit

The deadline for the exit of the United Kingdom from the European Union arrives on October 31 this year. This new deadline was set after a six-month extension from the original deadline of March 31, following the two-year time frame triggered by the invocation of Article 50 in 2017.

The probability of a no-deal Brexit is higher than it was six months ago. The new Prime Minister, Boris Johnson, seems determined to head in that direction.

What if there’s no agreement between the EU and the UK? How will markets react?

In this uncertain world, when the impossible often becomes normal, the last thing investors need is an event that has unpredictable consequences. But in about 70 days we might wake up to the reality of a hard Brexit. Financial markets wouldn’t like this outcome.

Prime Minister Boris Johnson announced that he wants to prorogue Parliament for an unusually long time. Normally Parliament is suspended for two weeks while the main political parties hold their annual conferences in late September. Those conferences are planned for September 21-25 (Labour Party) and September 29-October 2 (Conservative Party). This week Boris Johnson asked the Queen to prorogue Parliament between September 12 and October 14, a time frame that leaves little time for negotiation to avoid a hard Brexit by October 31.

When Members of Parliament return from summer recess, they will have only a few days to change the path of events that are heading toward a no-deal Brexit. The most likely route is an attempt to oust the Prime Minister by forcing a Confidence vote with the result of installing a new caretaker government to be followed by a general election. The government operates with a very slim majority, so the probability of the government losing a Confidence vote is high. This could force an election, which would be normal since Boris Johnson has yet to face the electorate as leader.

The EU meets on October 17-18, in time to stop a no-deal Brexit, if they are willing to pass a Withdrawal Agreement (WA) bill or to grant an extension to the October 31 deadline. Since they have been unable to pass the WA in its current form, they are unlikely to pass it now, with no changes. The EU has stated repeatedly that there will be no renegotiation of the WA and there will be no transition period without an agreed WA. The EU would need a very good reason to pass another extension to the Article 50 timeline.

The issue of the Northern Irish backstop is the main stumbling block to the WA, as Ireland will remain in the EU after a Brexit, which means there must be a physical border between Northern Ireland and Ireland. So, the most likely sequence of events is the call of a general election in the next few weeks, which gives the EU the excuse it needs to grant another extension.

An election would bring into focus the possibility of a change in government and a win for the Labour Party. The markets would not like a left-leaning government. Sterling could fall further, although it has already been very weak. The business sector is not ready for a no-deal Brexit or a Labour government, as everyone seems to expect a last-minute compromise.

The Pound sterling (GBP) is close to a 20-year low against the Euro (EUR). On Thursday GBPEUR traded at about 1.10, higher than the July low 1.07. Look for Sterling to break through the 1.00 level against the Euro if there’s an election called or if there’s a no-deal Brexit. 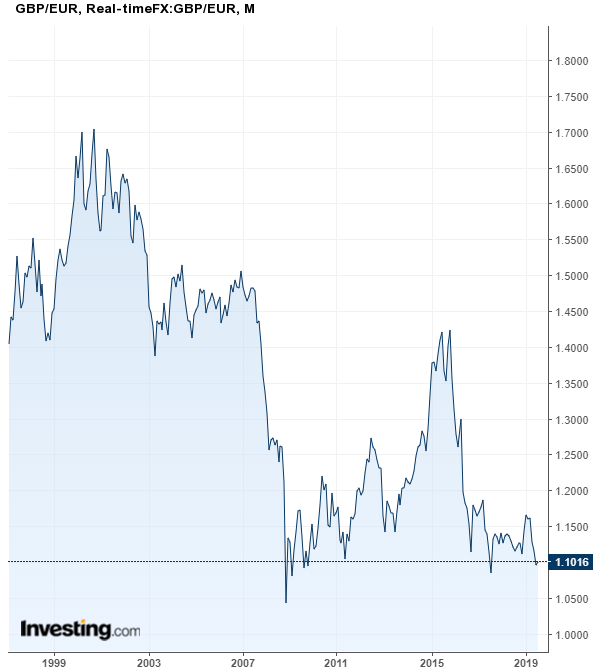