Recessionary warning bells are getting louder

The possibility of a global recession has been discussed openly in the last few months. New data released this week reinforce the view that a recession might be imminent.

There are many indicators of when recessions are likely, but indicators are not always reliable, so they are ignored by market traders. Trading the markets by timing a recession is just too difficult.

Are the recession warnings valid this time?

In June I wrote about A. Gary Shillings’ prediction that a recession could have started already in the U.S. Recent news makes his warning look prescient. Others have espoused the view that a recession is here, such as David Rosenberg from Toronto and John Williams from Shadowstats. Optimistic analysts are suggesting this current weakness is a mid-cycle pause that will see growth return by the end of 2019. Everyone seems to agree that a recession is inevitable in the next 24 months.

The biggest surprise of 2019 is the precipitous collapse of interest rates in the bond market. While the Federal Reserve cut short-term rates at the end of July for the first time in a decade, interest rates set by the bond market on longer-term maturities continue to record new lows, levels that have never been seen before, even in the Great Depression of the 1930s.

In Germany, the largest economy in the Eurozone, rates are negative with the 10-year Bund at -0.65 percent and the 30-year at -0.11 percent. Many people have asked how someone could accept a negative rate over such a long period? Why would anybody pay the German government for the right to hold a bond? While it is puzzling, there’s at least one plausible explanation; that investors expect deflation. If deflation were to average 2 percent per annum and one “earns” -0.11 percent that means, in real terms (inflation-adjusted), the bond holder receives a positive return of almost 1.9 percent.

Deflation, with private sector debt at unprecedented levels almost everywhere, would make the coming recession more serious. Asset values fall in deflation while debts remain the same, increasing leverage in the economy. That’s why central bankers have been trying to generate higher inflation, without much success. So, it would be important for investors to know if a recession is imminent.

One widely followed indicator is based on a survey of manufacturing purchasing managers. While manufacturing is a small portion of GDP today, the index has provided a reliable real-time gauge of the economy. The survey is centred on a neutral level of 50, with higher readings signaling expansion and lower meaning contraction.

The German manufacturing survey recently hit a new low of 43, strongly hinting of a recession.

While the U.S. is flirting with recessionary indicators, the U.S. remains the strongest economy of the developed countries, or the cleanest shirt in the dirty laundry bin, as the saying goes.

Dr. Julia Coronado of MacroPolicy Perspectives shows how the world stacks up using the PMI measure: 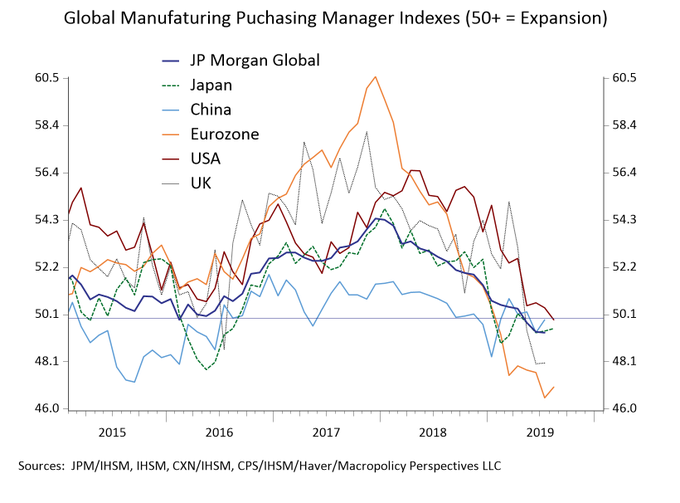 It’s clear that the current synchronized downturn in the global manufacturing outlook is unusual. With the UK, Japan, the U.S. and the Eurozone below 50 a warning bell has been rung.

It is possible that the PMIs will bounce, as they did after 2015. But, unlike 2015, the current expansion is the longest on record without a recession or a stock market correction of at least 20 percent.