The Fed responds to the pressure

The Federal Reserve Bank, headed by Jerome Powell, took the unusual step this week of cutting interest rates when the economy is strong, and the S&P 500 hit all-time highs.

Powell stumbled during the press conference while giving reasons for the cut. And then things got more confusing when he called the cut a “mid-cycle adjustment.” This was the first cut since 2008.

Why did the Fed choose to cut rates?

Employment is strong, at least as measured by the unemployment rate. The rate of 3.7 percent is near the lowest rates going back to the 1960s:

And inflation, as measured by the CPI, has been near the Fed’s target of 2 percent target that most central banks have adopted. Inflation hasn’t been decisively above that level since the late 1980s.

So, it would seem clear that the Fed should be happy with the economy, and especially in its role in overseeing monetary policy. Up until recently the Fed had been hiking rates from abnormally low levels put in place in response to the Global Financial Crisis. 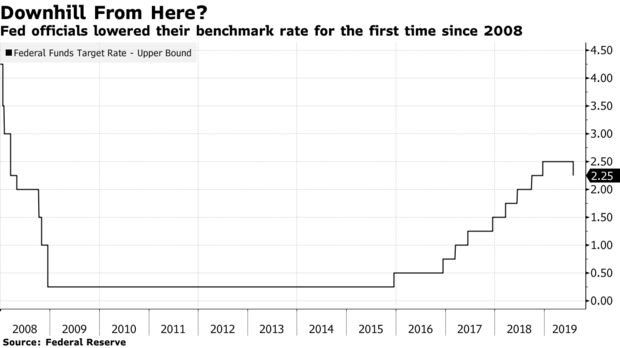 But at least one powerful person is unhappy with the Fed’s policy of raising rates for most of 2017 and 2018.

President Trump has tweeted many times about his dissatisfaction with the Fed, and Mr. Powell. Jerome Powell was nominated by President Trump in late 2017.  The negative comments from the President started in early 2018, soon after Powell took over. Here is a small sample of the comments and tweets by the President:

After three rate hikes by the Fed in six months, Trump says on CNBC in July 2018, “I’m not thrilled.”

Later that year in October, after the 4th rate hike, Trump said at a campaign rally, “They’re so tight. I think the Fed has gone crazy.”

In November, in an interview with the Wall Street Journal, Trump said, “I think the Fed right now is a much bigger problem than China. … I don’t like what they are doing… they’re not being accommodative at all.”

The Fed raised rates again in late December 2018 by a quarter point.

On April 4, 2019, President Trump tweets, “Despite the unnecessary and destructive actions taken by the Fed, the economy is looking very strong.”

On June 11 another Presidential tweet: “The Fed interest rate is way too high, added to ridiculous quantitative tightening! They don’t have a clue!”

On Tuesday this week, July 30, President Trump tells reporters that he wants a “large cut” from the Fed, and said, “I’m just very disappointed in the Fed.”

The next day, on Wednesday, July 31, the Fed announced a 25 basis-point rate cut, smaller than the 50 basis points that some expected. Powell said that “it’s not the beginning of a long series of rate cuts.”

President Trump tweeted, “As usual, Powell let us down.” The President wanted a much larger cut in interest rates.

With GDP and employment numbers that look very good, it’s hard to find a clear economic justification for the Fed to cut rates. In fact, two members of the Fed committee took the unusual step of dissenting from the decision, saying cuts are not needed as the economy is growing, the labor market is strong and there is low inflation.

It does look like the Fed might have been bullied into cutting rates at this time.  Of course, if the economy weakens from here, there will be several more rate cuts and the President will say, “I told you so!”. And he will blame the Fed for the next recession, which could be convenient for him heading into the November 2020 election.