The Bank of Canada says the housing correction is over

The Bank of Canada Monetary Policy Report was released this week, along with the announcement that the Bank interest rate would remain at 1.75 percent.

As happened in the U.S. and with other central banks, the Bank of Canada hinted that rates will be lowered, perhaps as soon as September. The Bank of Canada also indicated that the Canadian economy is in good shape and that housing is starting to rebound.

Is the Bank of Canada right about housing? If things are so good, why are they likely to cut rates?

The Bank of Canada is sticking to the narrative that the economy is strong, even though the housing market is in a correction and the energy sector is still very weak.

The Bank of Canada’s Carolyn Wilkins issued an opening statement on Wednesday as she and Governor Poloz prepared to take questions from the media. In those remarks, she discussed the housing sector:

“The housing market is evolving as expected at the national level. Adjustments to previous speculative activity and changes in housing finance conditions have been difficult in some markets. We’re seeing signs that the housing market is improving in the Greater Toronto Area, while prices and activity are still adjusting to more sustainable levels in the Greater Vancouver Area, and Alberta’s market continues to adjust to lower oil prices. At the same time, interest rates on five-year fixed-rate mortgages have fallen recently to around where they were five years ago, which is relevant for people buying a new house or renewing their mortgage. It also reinforces our view that residential investment is once again contributing to growth. (emphasis added).

This very optimistic view stands out since Canada’s housing market is still in a correction after a bubble that was unprecedented in size and several magnitudes larger than the U.S. housing bubble that peaked in 2006.

The suggestion seems to be that the modest price declines we’ve seen since 2016-2017 when Vancouver and Toronto prices peaked are enough to restore affordability. The media release says that interest rates are now low enough that people can afford house prices again. In a response to the questions Deputy Governor Wilkins said that the housing sector will no longer be a drag on growth.

This rosy scenario is unlikely to play out the way that the Bank of Canada and other soft-landing adherents would like.

In examining the housing sector and the ability of households to repay housing debt we find that the debt service ratio is useful. That ratio is a combination of the size of the debt, household incomes and the level of interest rates. With rates near record low levels one would think that Canadians could easily afford their mortgage payments. But one would be wrong. 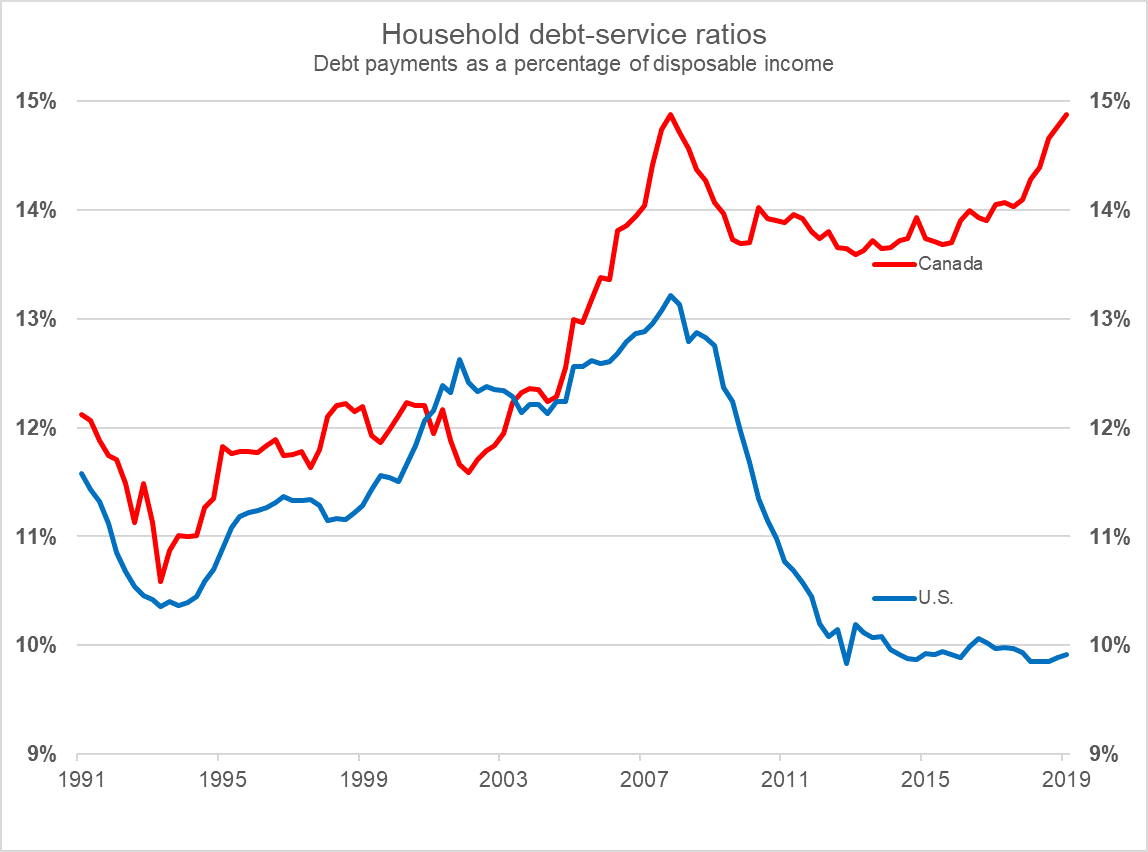 This graph shows that the current peak of 14.88 percent is equal to the previous peak reached just before the 2008-09 Global Financial Crisis.

The U.S. ratio peaked at 13 percent and has corrected to about 10 percent since then. This is another illustration of how much more dangerous the Canadian bubble is compared to the U.S. experience.

So, even with very low mortgage interest rates, Canadians are paying a higher percentage of their income for housing than ever before.  This is a major risk to consumption for other household goods, like cars and furniture. Canadians are likely to do everything they can to avoid defaulting on their mortgage, which would mean cutting back on many other more discretionary purchases in a recession.

Perhaps this is the reason that the Bank of Canada is contemplating a rate cut. The housing market cannot handle any further stress in the form of higher rates.