Iran is desperate and dangerous

Iran and the United States are escalating their hostilities, with recent attacks on commercial tankers by Iran and a U.S. air strike canceled at the last minute by the U.S.

Although President Trump ran for election on a policy of opposing any U.S. military involvement in the Middle East, the chances of a confrontation have grown significantly in recent months.

Will there be a military conflict with Iran? If yes, what happens to the price of oil?

Relations between the U.S. and Iran have been deteriorating since President Trump’s 2016 election. The previous U.S. administration participated in an agreement with Iran on non-proliferation of nuclear arms, known as the Joint Comprehensive Plan of Action (JCPA) in 2015. This agreement between Iran and China, France, Germany, Russia and the United States requires, among other things, that Iran stop developing uranium supplies that could become fuel for nuclear weapons. The U.S. agreed to cease the application of sanctions on Iran’s banking, shipping and oil sectors.

In May 2018 the U.S. withdrew from the JCPA and threatened to re-impose sanctions on Iran. Trump said at the time that “the heart of the Iran deal was a giant fiction: that a murderous regime desired only a peaceful nuclear energy program.” Trump also said that the agreement was “a horrible one-sided deal that should have never, ever been made.”

At that time the U.S. gave a six-month warning that sanctions on Iran would be re-imposed. On November 5, 2018 those sanctions, the toughest ever imposed on Iran, were reinstated. The sanctions target energy, shipbuilding, shipping and the financial sectors. The interbank money transfer system, known as SWIFT, is also be under sanction, disconnecting all Iranian financial institutions from the rest of the world.

Since the imposition of sanctions, oil exports from Iran have tumbled by about 2 million barrels per day. Iran’s economy shrank by almost 4 percent in 2018 and inflation jumped to 31 percent. The IMF says that a 6 percent drop in GDP is possible in 2019.

Iran has threatened to restart their nuclear program if the U.S. doesn’t lift the sanctions. Backed into a corner, the Iranians may feel they have no choice but to retaliate, especially if they think that the U.S. might attack. They also could be betting that Trump could fail to get re-elected in November 2020, and the Democrats would reinstate the JCPA.

These developments are pushing Iran and the U.S. closer to the brink of war.

What could Iran do to threaten the U.S.?

First, Iran could get their allies in the region to bolster offensives against the U.S., or its ally Saudi Arabia. An attack on June 28 of a Saudi oil pipeline by Iraq appears to be one example.

Second, Iran could cut off the supply of crude oil and LNG that passes through the Strait of Hormuz. The Strait is the passageway for crude tankers carrying 18 percent of the world’s crude supply. About 60 percent of all crude is shipped on the ocean so the world would feel the closure of the Strait right away. Oil prices would spike to levels never seen before, as high as $150 temporarily. Oil prices that high would trigger a global recession, and kill demand for oil, unless the closure was reversed in less than a week or two. 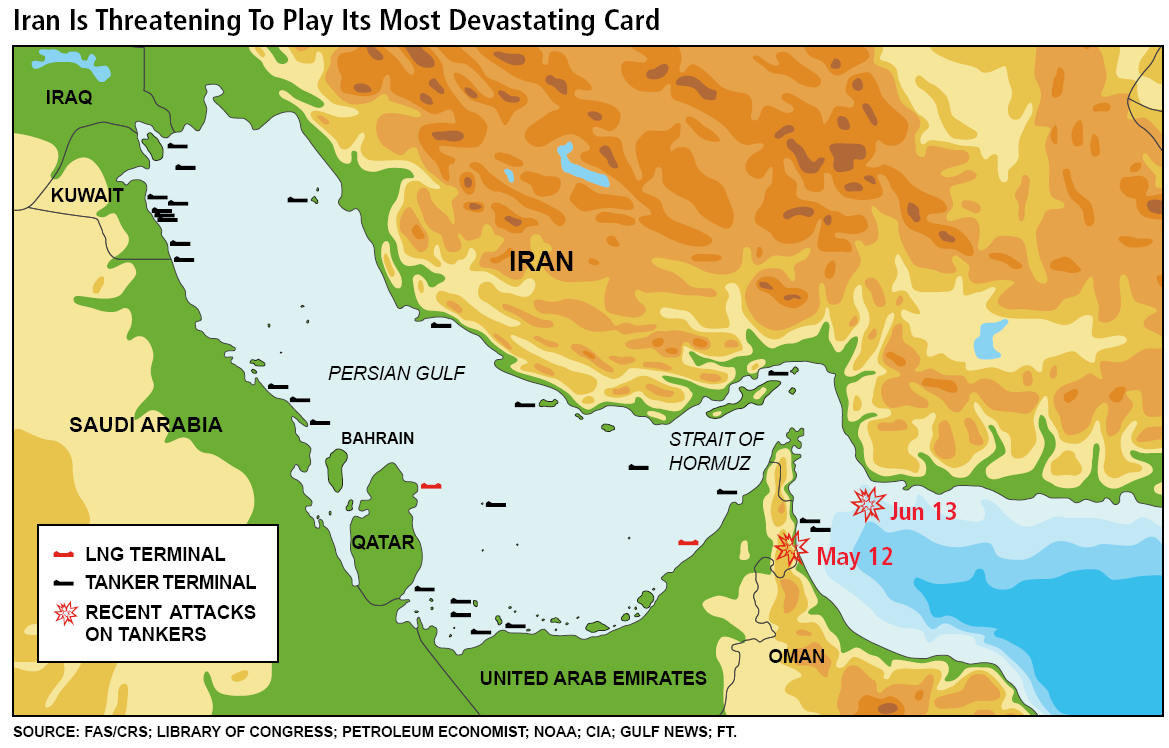 Of course, Iran would only take that step if they felt that the U.S. was going to attack anyway and their existence as an independent country was at risk.

With Iran’s large youth population and weak economy, a patriotic war against an unpopular opponent like the U.S. could be advantageous to the Iranian leaders.