A highly regarded forecaster, who has an excellent track record going back to the 1960s, claims that a recession may have already started in the U.S.

There is ample corroborating evidence of a slowdown, as the Federal Reserve abruptly shifted their policy stance to cutting rates in January 2019. The first rate cut of this cycle is likely to come at the Fed meeting on July 28-29, 2019.

Could this recession prediction be correct? What would a recession mean for bonds?

Gary Shilling, in his “Insight” publication dated June 2019, writes that a recession probably started in the 2nd quarter of 2019 in the U.S. Shilling’s report and his recent interview for Real Vision are for subscribers only, but a brief summary is available in USA Today.

Shilling worked on Wall Street in the 1960s and 1970s, making several accurate predictions since that time. Today, as an independent economist and forecaster, Gary is watching key indicators like corporate debt and business capital expenditures for recession signs. Gary’s most famous, and profitable, prediction came in the early 1980s when he said that interest rates would decline for years. He bought government bonds yielding 14 percent and made huge gains personally as rates declined for more than three decades.

The next U.S. recession should be mild, as there is no financial crisis looming and the U.S. housing market isn’t in a bubble and there’s no subprime lending to households.

On the other hand, corporate debt is a problem, as borrowing at low rates by non-financial corporations has been growing for more than a decade. Much of this borrowed money was squandered in non-productive activities, like share buybacks, which makes the next downturn more dangerous. 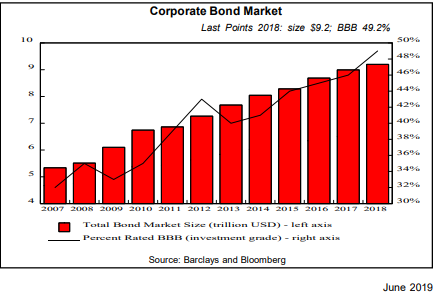 If corporations get into trouble due to excessive debt, they will cut back on capital expenditures, because it’s easy to reduce expenditures quickly by cancelling projects.

Corporate credit grew at 5% annually for the last two decades but slowed to 3.0% in 2018. The sub-category of leveraged loans grew at 15.8% annually and increased to 20.1% in 2018. When risky loans grow that fast it’s a warning sign that some borrowers are desperate. While the total corporate bond market is over $9 trillion, the leveraged loan segment is about $1.2 trillion. Leveraged loans would be the first to default as there is usually very little cushion on the borrower’s balance sheet. The ensuing “flight to safety” stampede would make government bonds more popular than corporate bonds.

The Federal Reserve Bank publishes a periodic Financial Stability Report. Here’s some excerpts from the May 2019 report:

“A slowdown in economic activity could result in an increase in default rates, which would lead to elevated credit losses at financial institutions holding corporate debt…”

“If the economy were to slow unexpectedly, profits of nonfinancial businesses would decrease, and, given the generally high level of leverage in that sector, such decreases could lead to financial stress and defaults at some firms.”

The investment most likely to outperform during the next recession, according to Shilling, is the long-term U.S. government bond. The 30-year bond currently pays about 3%.

Shilling is forecasting a drop in the 30-year yield to 2%, which means the price of the bond would rise and the gain on a 30-year bond would be about 22%.

If Shilling is right about a recession, U.S. government bonds are a bargain at current prices.