The Fed hints at rate cuts

On Wednesday June 19, 2019, the Federal Open Market Committee (FOMC) of the U.S. Federal Reserve Bank announced its decision to hold policy interest rates steady at 2.25% to 2.50%.

Market participants are watching the Fed closely to see if rate cuts are coming, as there are some signs of a weakening economy. The wording of the announcement hinted the Fed is leaning in the direction of cuts later this year.

Will the FOMC cut rates at its next meeting in July?

After every Fed meeting, market participants scour every word of the Fed’s announcement for clues about the future course of Fed policy. Some of the wording changed significantly this week, with the word “patient” dropped and new wording such as “closely monitoring” added. While this change doesn’t guarantee a policy change, most observers expect that there will be a rate cut at the next meeting in July.

The Fed has two mandates: First, to sustain economic expansion and full employment and second, to maintain stable prices. On the second goal the Fed, along with most other central banks in the world, uses two percent as its target for inflation.

In mid-2019 the job market and employment are strong, and unemployment is at the lowest level since 1969. The economic expansion has lasted for a decade, from its beginning in the aftermath of the Global Financial Crisis of 2008-09. Speaking of the current state of employment, the chair of the Fed, Jerome Powell, said that “community, business and labor leaders all tell us that the prospects for job seekers have seldom been better … Wages are rising, and this is particularly so for lower-paying jobs.” Until recently most analysts thought that the Fed would continue hiking rates, as it has been since 2016.

But this economic expansion has been sub-par. After the worst recession since the 1930s, it would have been normal to see a strong recovery. But the U.S. economy didn’t respond as expected. For example, the housing sector has been relatively weak. Housing is one area where the Fed believes it can stimulate directly when interest rates are lowered. But home ownership rates are still near the lowest level of the last four decades.

So, the Fed would like to extend the tepid recovery even longer to allow more people to participate.

On the second mandate, to maintain stable prices at the target level, there is a potential problem as inflation has failed to reach the two percent goal despite many vigorous attempts by the Fed to generate higher prices. Wages are not rising quickly enough to satisfy Fed policy makers. As Powell stated, “We are firmly committed to our symmetric 2 percent inflation objective, and we are well aware that inflation weakness that persists even in a healthy economy could precipitate a difficult-to-arrest downward drift in longer-run inflation expectations.”

What does it mean if the Fed cuts rates later this year?

Most traders love rate reductions, as they think markets will move higher and they don’t understand that lower rates can be a sign that the economy is in recession, or soon will be. As John P. Hussman of Hussman Strategic Advisors points out, in the last sixty years, the Fed has cut rates 11 times, but only twice, in 1967 and 1996, have those cuts not signaled the start of a recession. 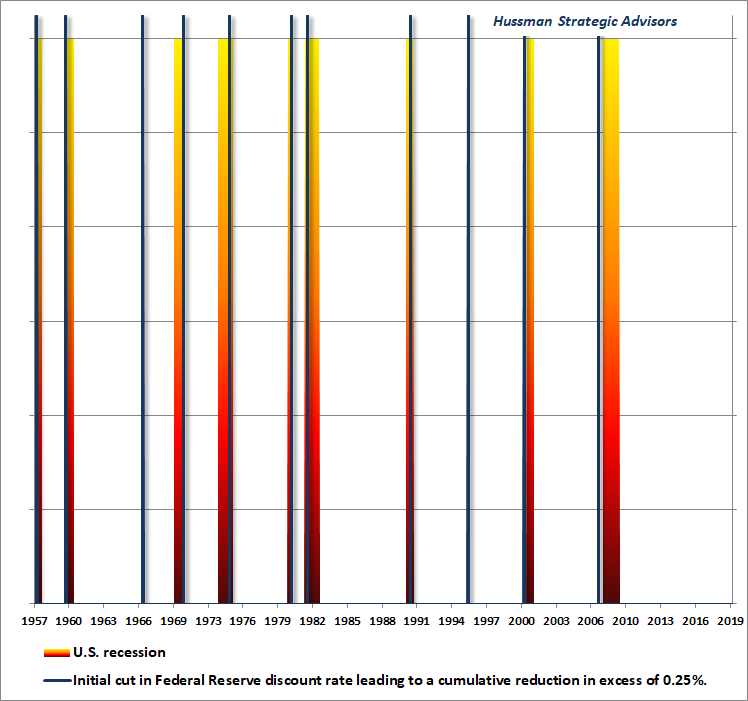 In other words, the FOMC is a follower of the economic trend, not a leader. Rate cuts by the Fed in July or September would likely be confirmation of an imminent recession.

As Hussman says, “be careful what you wish for.”