Consistent with my recent book, “When the Bubble Bursts: Surviving the Canadian Real Estate Crash”, Vague finds that most crises in history were preceded by a surge in private sector debt.

Does Vague predict that Canada will experience a financial crisis?

Vague first came to my attention in 2014 while I was writing the first edition of When the Bubble Bursts. In his 2014 book, “The Next Economic Disaster; Why It’s Coming and How to Avoid It?,” he describes how a rapid increase in private sector debt as a ratio to GDP of 15 to 20 percent over a five-year period and a total private sector debt-GDP that is above 150 percent is a reliable predictor of a financial crisis.

For example, prior to the Global Financial Crisis from 2001 to 2006 total mortgage debt in the U.S. doubled to $10.6 trillion. The crisis followed two years later in 2008.

In “A Brief History of Doom” Vague goes deeper into the reasons for the many financial crises of the last two centuries. At 196 pages the book is easy to read.

For example, dozens of books have been written about the Great Depression in the 1930s. Vague takes a different point of view by looking more closely at the period prior to the 1929 crash which shows the most important factor that all economists missed. Private sector debt growth was fueled by a lending binge for real estate construction. Houses were a priority. All quotes from “Brief History of Doom”:

“The state of the nation’s housing had become a national issue in 1921 when Secretary of State Herbert Hoover began to advocate for increased home ownership.”

But commercial real estate developers were also eager to cash in on the boom. “Between 1925 and 1931, office space increased by 92 percent in Manhattan…In New York alone, approximately 235 new buildings were constructed…almost all debt financed.”

Vague had an impressive career in the private sector. He sold a credit card company he founded, First USA., to Banc One for $7.9 billion in 1997. A majority interest in Juniper Financial, founded in 2000, was sold to the Canadian bank, CIBC, in September 2001. Juniper eventually became part of Barclays credit card division.

Steve Keen, economist known for predicting the Global Financial Crisis, has written extensively on the relationship of growth in private debt as the cause of crises, including his book “Can We Avoid Another Financial Crisis?”. Keen, who has collaborated with Vague, says that Vague has broken new ground in the understanding of past crises. Here’s Keen’s chart of the 1920s prior to the Great Depression: 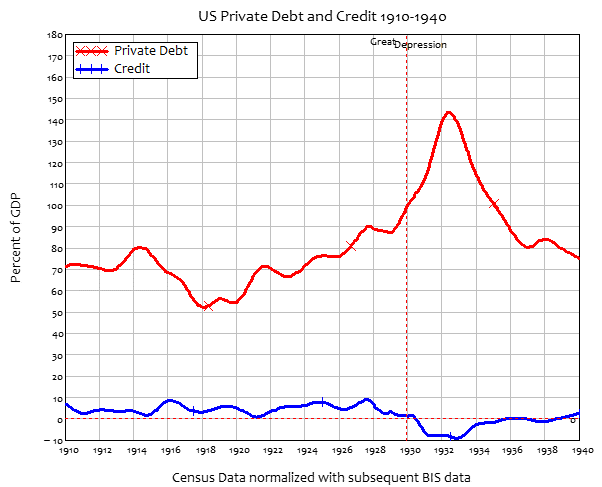 Vague does not mention Canada or any other country headed for a crisis. He singles out China, suggesting that its unique government structure could delay a crisis indefinitely.

His most important recommendation is to the regulators. He suggests that they monitor growth in private sector debt-GDP as an early warning indicator.

He could have been talking about Canada.