Toronto is the epicenter of the housing bubble in Canada

This week I visited Toronto, did several interviews and gave a keynote address. The topic was housing bubbles, debt and Canadian banking.

So far, the Toronto housing market remains more resilient than in Edmonton, Calgary and Vancouver although there are some cracks appearing in the suburban areas surrounding Toronto.

Is the Toronto housing market immune to the housing correction that is gaining momentum elsewhere? Does complacency prevail regarding a housing crash?

On Tuesday morning I gave the keynote address to the Euromoney conference on covered bonds. Covered bonds are used extensively in Europe with a 250-year history but are not well known in Canada. Covered bonds are issued by banks, and the bond is backed by the bank’s general credit but the issuer also provides specific collateral in the form of mortgages.

I started with reasons why the Canadian housing bubble will lead to a hard landing. Then I compared Canada’s housing and debt bubbles to other bubbles past and present, illustrating how extreme Canada’s situation is, and then discussed the Canadian banking system to see if a hard landing would trigger a financial crisis.

Throughout the day other panelists were asked what they thought of my view. There were many reasons given to support the prevalent view; that it will be a soft landing. One such opinion was stated by a senior executive with a Canadian bank, who said that the banks are in great shape because delinquencies, or non-performing loans, are at record lows.

This is an example of complacency. History shows that during the last stages of a housing bubble, delinquencies are always low, because rising house prices allow people who are financially strained to refinance or roll over their debts. The fact that they would be unable to repay their debts is masked by rising housing prices. Here’s a chart showing the low level of non-performing loans just prior to several crises. 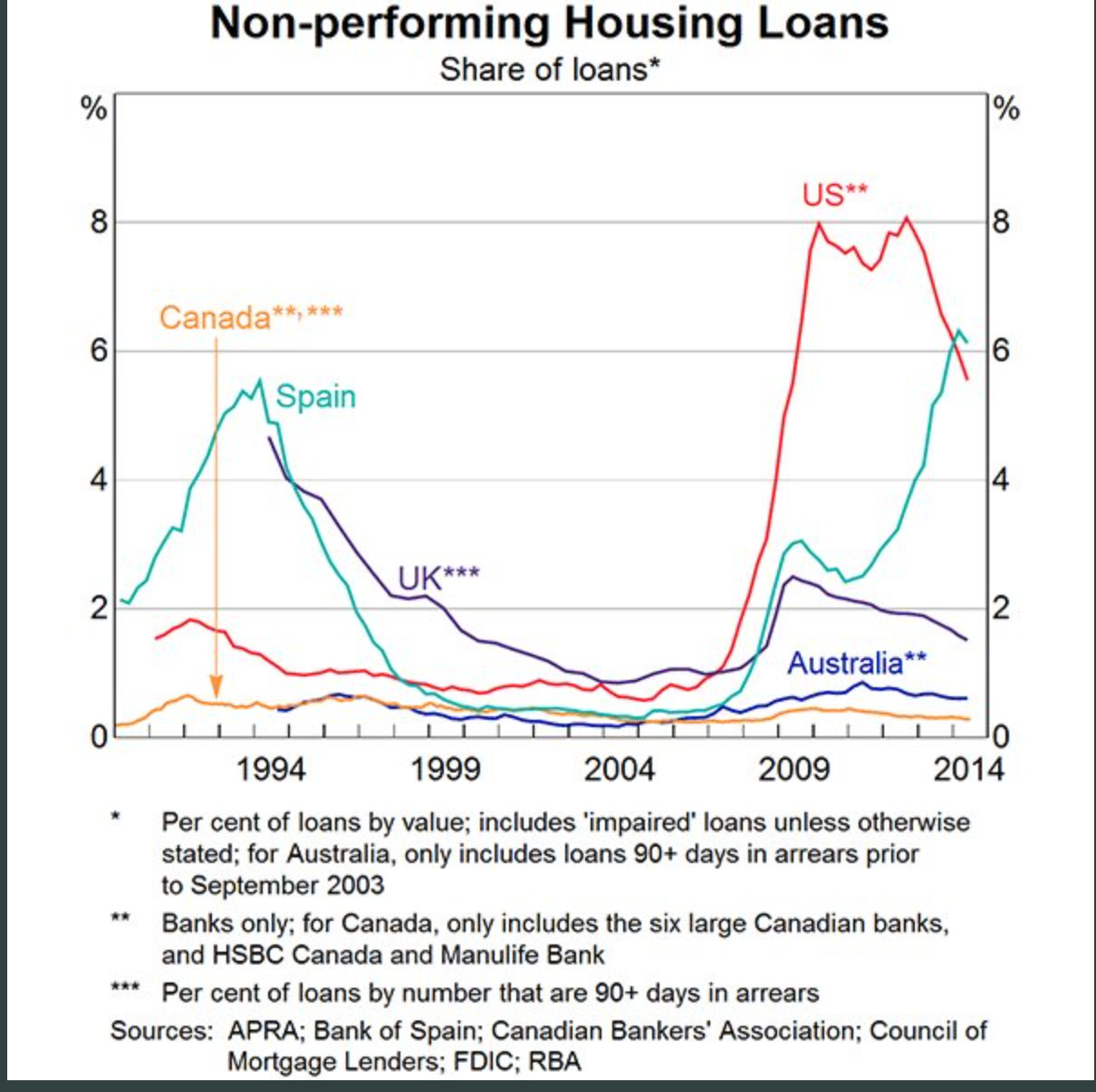 Another highlight was my visit with one of the top insolvency trustees in Ontario, Doug Hoyes. We did a recorded interview which will be available in about two weeks. I will tweet out a link on @hmacbe.

We spent 40 minutes on the housing situation, and the credit creation process and other things. Then, over lunch, I learned about how insolvency trustees help people.

One surprise was that many of the people who come to Hoyes for help are not careless spendthrifts. They are regular people, who have a lot of debt, as so many Canadians do, and are brought down by a sudden, unfortunate event. For example, some get divorced, or they fall ill, or they get laid off from a job. It could happen to any of us. For these people the trustee will make a consumer proposal on behalf of the client to pay part of their consumer debts. If the creditors agree, the debtor pays the agreed amount, usually over five years. The average agreed amount is about 1/3 of consumer debts owing. The other option is bankruptcy, which deals with both consumer debt and mortgage debt. Doug Hoyes agreed with my opinion that his firm will be very busy for the next few years.

On Thursday I did an interview with Amber Kanwar on BNN Bloomberg, about the controversial stress test imposed in January 2018. Should it be removed? Evan Siddall, CEO of the CMHC, has said that the government should keep the stress test, while many in the housing industry are lobbying hard to get it removed. Amber also asked if it will be a soft landing, as many people in Toronto believe.

I said that helping people to avoid getting into too much debt is a good thing, so I agree with Siddall. Restoring affordability requires that house prices come down much further so there will be a hard landing. Here’s the link.

It was a very interesting week in Toronto, the epicentre of Canada’s housing bubble.

It was clear that complacency is still prevalent, with the majority believing that the housing bubble will end with a soft landing.