The Bank of Canada (BOC) released its Financial System Review on May 16, 2019. This periodic review includes the BOC’s assessment of the key risks, or vulnerabilities, to the Canadian economy and the financial system. One of the central bank’s main responsibilities is to “promote safe, sound and efficient financial systems, within Canada and internationally.”

One key risk to the Canadian financial system, according to the BOC, is the “elevated level” of household indebtedness. Another key vulnerability is “imbalances in the housing market.”

For several years the BOC has highlighted these two risks as the most important.

With house prices on the decline in most of Canada’s housing markets, does the BOC see the risk to the financial system increasing?

The BOC does a regular survey of risk management experts in the finance system. Here’s a summary: 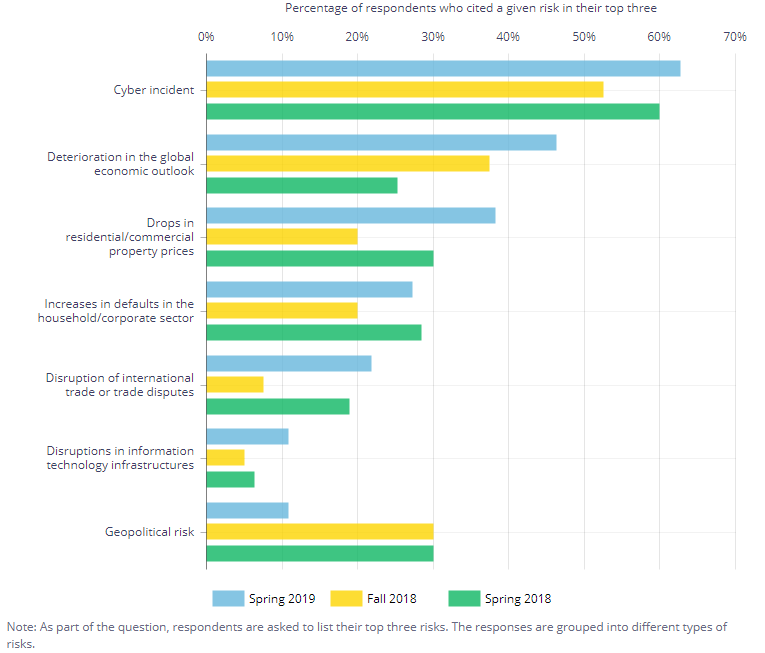 Despite the responses to their survey showing that risk managers are more worried than they were in late 2018, the BOC has decided to lower its assessment of the overall risks to the Canadian financial system, saying those risks have “declined modestly”. This assessment comes after a slide in house prices and deterioration to the global economic outlook. The fact that the BOC sees less risk seems odd, as household debts haven’t gone away, and corporate debts have been increasing rapidly. And now the collateral (real estate) that backs those debts is declining in value.

A close examination of the chart shows that two of largest increases in top risks (shown as the difference between the blue and yellow bars) were “increases in defaults in the household/corporate sector” and “drops in … property prices”.

In the report the BOC also highlighted a ratio that measures the financial wellbeing of households, focusing on debt and income.

The ratio of debt to disposable income is stable, while debt to net worth has increased recently 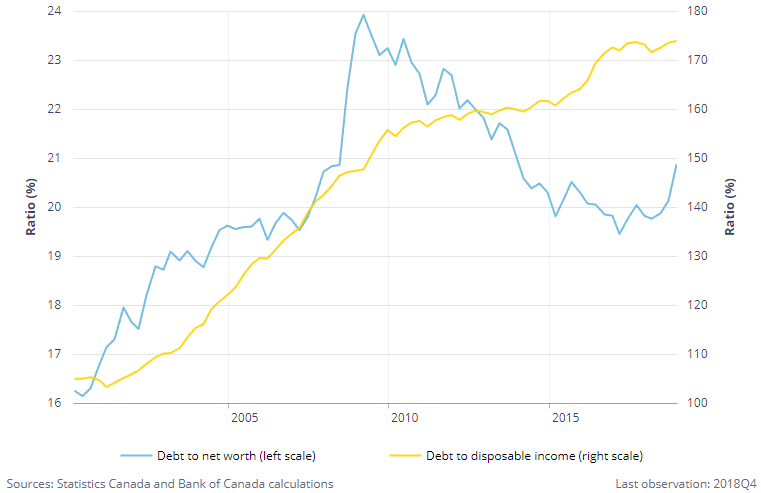 Until 2016 one of these ratios (blue) was improving for several years, at a rapid rate, as house prices grew faster than debts. The other ratio, debt to disposable income (yellow), continued to deteriorate, but every time it would hit new highs, showing increased vulnerability, there would be some economists quoted as saying that the higher level of household debt wasn’t a problem because household wealth was improving even faster. Since house prices peaked in 2016, the Debt-to-Net Worth ratio has worsened, climbing back up to 21 percent.

Other indicators are flashing warning signs. All the regulated lenders in Canada use a measure called the Debt-Service Ratio as their key measurement when deciding if Canadians can afford to buy a home, and how large a mortgage to offer the borrowers. This ratio (blue line below) recently hit its “historic high”, meaning that the debt burden for households is getting worse.

After being steady for years, the debt-service ratio has recently risen due to higher rates 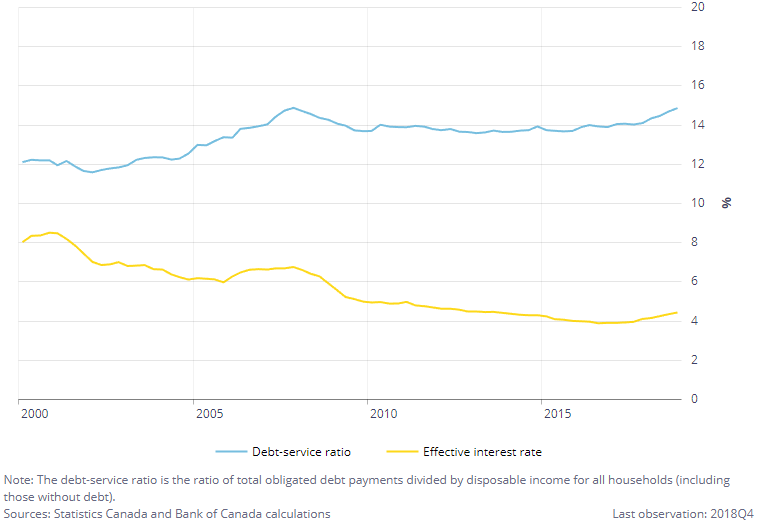 Based on these indicators it is surprising that the BOC concluded that vulnerabilities have “declined modestly”.

The latest FSR did include one new key risk that hadn’t been highlighted before. Vulnerability #4 is “Fragile corporate Debt funding from certain markets”.

Since private sector debt is made up of household debt and non-financial corporate debt, this new risk puts the spotlight directly on private sector debt, as a key risk indicator for financial crises going back for more than a century. Whenever private sector debt as a ratio to GDP grows by 15 percent or more in a five-year period and reaches greater than 150 percent a financial crisis usually follows. Canada breached both those levels in the last decade. As the Bank for International Settlements says, Canada is in the danger zone: 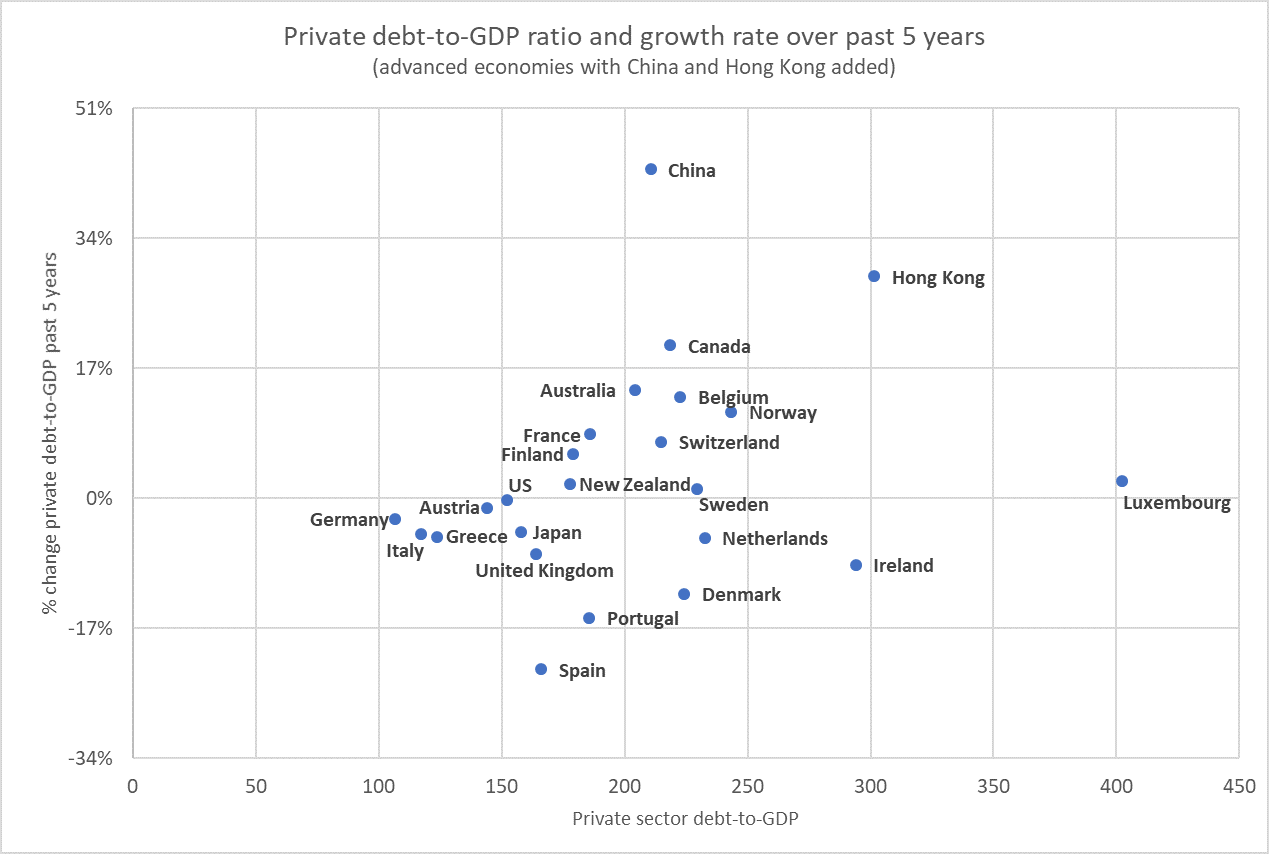 So, while the BOC is confident that risks have improved, Canadians should not get complacent. The continued increase in private sector debt combined with the decline in the main collateral asset backing those debts, real estate, suggests that a financial crisis is possible and even more likely.