The U.S. trade war with China escalated last week, as a deadline imposed by the U.S. administration passed, without any agreement. The U.S. placed additional tariffs on imports of goods from China that take effect on June 1.

The outlook for an agreement, which, until recently, many felt was a certainty, has dimmed substantially. Some analysts place the chances of an agreement this year at only 50 percent.

What happens if the trade war escalates further? Who are the winners and losers? 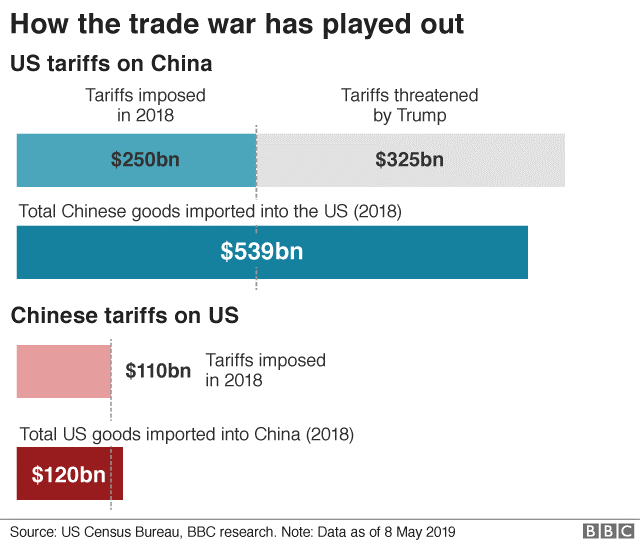 Contrary to widespread public opinion, there is very little pressure on the U.S. President to reach an agreement. Whenever the President stands up to China, citing some complaint about their trade practices, he gains popularity among a significant portion of the public. The narrative that trade is bad seems to be accepted by some and the idea that China has been taking advantage of the U.S. on trade is accepted by the majority. Portraying China as the “bad guy” while claiming that the Chinese government is guilty of intellectual property theft, forced technology transfers and restrictions on market access plays well to the crowd. And there is some truth to these accusations.

But trade is not a winner-take-all contest. Trade is a two-way affair, with advantages and disadvantages for both parties. The manufacturing of thousands of items that can be delivered to North American shores for a reasonable price from lower-cost manufacturers abroad has helped millions of people and kept inflation low. Many of those items couldn’t be replaced with U.S. manufacturers at the same cost. And it’s not just in the U.S. that gains have been made. Germany and China have developed closer and closer trade ties over the past two decades.

But the public increasingly sees the conflict in black-and-white terms. And any negative impact of the tariffs has been downplayed. The U.S. President has often claimed, incorrectly, that China will pay for the tariffs, in a similar way that Mexico was going to pay for the wall.

But the facts show, unequivocally, that the imposition of tariffs raises costs for U.S. consumers. In a 2019 study for the National Bureau of Economic Research, Mary Amiti, Stephen Redding and David Weinstein, The Impact of the 2018 Trade War on U.S. Prices and Welfare, show that prices of intermediate and final goods increased substantially on those products targeted by the tariffs. There was “complete passthrough of the tariffs into domestic prices of imported goods.”

Trade wars in the past have broken out when unemployment is very high, such as in the 1930s, and people felt it would be better to employ local labour to make goods at home. But unemployment in the U.S. is at record low levels. So instead of increasing domestic income by shifting production to the U.S. from China, the tariffs will just have the effect of raising domestic wages and costs. This will push the inflation measures higher and could result in the Federal Reserve being forced to raise interest rates.

The U.S. could be making a miscalculation in thinking that China will blink first. China’s exports to the U.S. are only 3.6% of GDP, less than half as important as they were in 2006.

And, unlike the U.S., China can stimulate their domestic economy for many years without worrying about reaching maximum capacity. The Chinese family is still a saving machine, so there is lots of room for a consumer-led expansion if the Chinese can be convinced to buy more domestic consumer items.

The losses in a trade war are shared by everyone, eventually. But the capacity to withstand the pain during the war might be higher in China than the U.S. believes.

Don’t expect a quick resolution to this dispute.