The money illusion and housing corrections

A quirk from the field of economics, called the ”money illusion,” will play a big role in the housing market correction now underway in Canada.

This correction, which I predict will become a crash, will be very different from the large correction in the 1980s.

How does the money illusion work? How will it make the housing correction worse?

The money illusion has been discussed for a century by economists like Irving Fisher and John Maynard Keynes. Fisher is famous for his statement just before the 1929 stock market crash that stock market values had reached a “permanently high plateau”. But he also did serious work such as the Debt-Deflation theory.

This example is often cited to explain the money illusion:

Workers are very upset if wages are cut by 2 percent when inflation is zero but are reasonably happy with a 2 percent wage increase when inflation is 4 percent. If workers were to judge how well they are doing after taking inflation into account, they would feel as badly treated in the second situation as the first. But they much prefer the 2 percent increase in wages, due to “money illusion”.

Another example of “money illusion” happens in residential real estate. People are not very good at assessing the real value of long periods of home price appreciation in inflation-adjusted terms. A good example of this happens when grandparents pass on and their descendants sell the house that is in the estate. Most people in that situation are aware of what was paid for that house decades ago and are impressed by the amount of price appreciation. But they should be wary of the money illusion:

The current housing correction won’t be helped by the “money illusion” as much as past corrections. The inflation rate is too low. This means that people will experience the equivalent of the first alternative in the wage adjustment example above, where there is a wage cut of 2 percent.

From 1980 to 2000 the rate of inflation in Canada averaged 3.76% annually. This means that money lost slightly more than one-half of its value. The homeowner who was pleased that their house value doubled over that two decades was blissfully unaware that the gain was entirely due to the money illusion.

An annual house price increase of 3 percent with 8 percent inflation is much easier to accept than a decline of 5 percent with no inflation. This is one of the reasons that central bankers and governments all over the world were trying to reignite a higher inflation rate over the last decade. They failed to accomplish their inflation goals and Canadian inflation is still very subdued at less than 1.5 percent on average for the last five years.

If this low inflation regime persists, homeowners will become acutely aware of the decline in their housing values, since it won’t be cushioned much by the money illusion. This will make the housing correction harder to stomach, as assessed values of homes will drop. 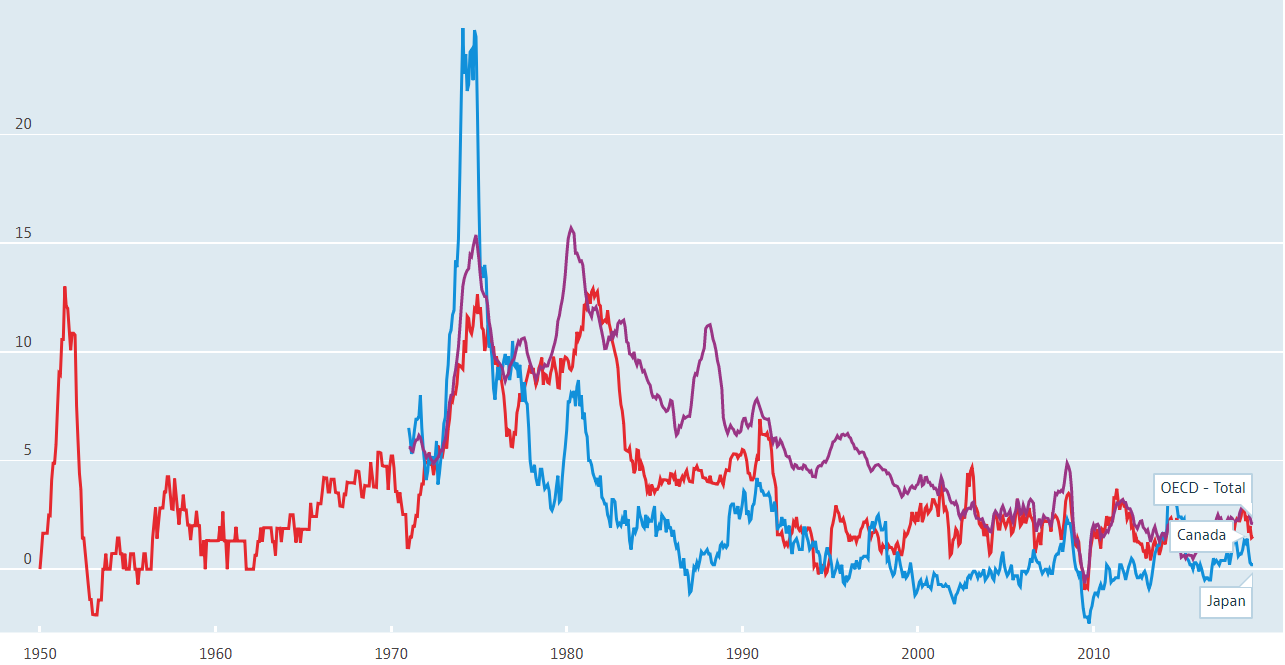 Japan has been living with this low-inflation situation for decades, as house prices declined for 25 years while inflation was almost non-existent. Interest rates in Japan were close to zero for most of that time.

So, it’s not impossible to survive a low-inflation housing crash. But It’s very difficult to remain in denial about the extent of the price adjustment that occurs.