Hard Brexit on the horizon

Prime Minister Theresa May faces her biggest challenge as leader next week as MPs are to vote again, for the third time, on the Withdrawal Agreement (WA) negotiated with the EU. The EU granted a brief extension to the March 29 deadline but imposed a condition that the Parliament must agree to the WA next week. If the WA is not passed, there will be a new April 12 deadline for May to tell the EU what the next steps are.

If the deal is voted down again next week, there is a distinct possibility of a “hard” or “no-deal” Brexit.

What are the likely next steps? How will markets react if the vote next week turns down the WA?

The outlook is poor for an agreement on withdrawal to be reached by next week’s deadline. The U.K. government, led by Conservative Theresa May, has failed to find a way to deal with some key issues that make it impossible to get any agreement passed through Parliament. The EU has made it clear that they are not in the mood to make any further amendments to the WA as it stands.

In an exit without an agreement there will be issues that will affect immigration and trade, as well as markets. The City of London is the world leading centre for financial activity according to many participants, although North Americans tend to think of Wall Street as first.

Financial firms in London have hedged their bets by opening offices in Frankfurt and Paris and setting up a small staff there, in case they are denied access after March 29, now April 12. In the early days of the negotiations there was talk about allowing financial professionals the right to work in the EU, even if the UK exits the EU. But those ideas went nowhere, and the talk about allowing those professionals easy access had disappeared. In a “hard Brexit” there will be problems in the service sector that deals in finance, which is arguably the largest industry in the U.K.

The holy grail for the U.K. parliament might be a lengthy transition period, when the U.K. and the EU move toward a customs union, a common market 2.0 or some other arrangement.

Many analysts (I was one of those who felt this way) suggested that a general election and a second referendum would be the preferred path. After all, the 2016 referendum of 52/48 is hardly decisive. And perhaps some of the younger people, who will be most affected by the change, didn’t get out to vote as they didn’t realize the importance. So, announcing the intent to hold a new election, with a renewed mandate in Parliament to hold a second referendum, if necessary, would be enough to convince the EU27 to allow a delay until the EU elections in May. There is even a petition circulating with 2 million signatures that advocates canceling Brexit.

Here is a schematic from The Telegraph in London: 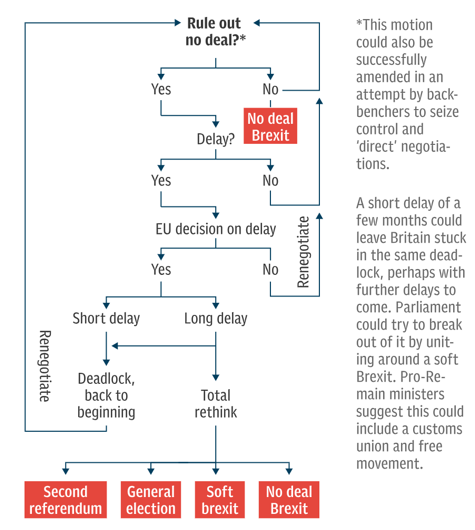 But if a hard Brexit happens in the next two weeks, the U.K. currency will drop, most likely, and markets in both London and in Europe will be volatile.

Stock market valuations in Germany, France and other parts of Europe are very attractive compared to the U.S. markets, on average. If there’s a hard Brexit or some other poor outcome, it could be a good time to add to positions at a discount price.