The Bank of Canada gets cold feet

The Bank of Canada (BOC) announced that interest rates would remain unchanged, continuing its stance in January 2019.

The media release emphasized the economic slowdown, both in Canada and globally. It appears the BOC is changing to a “glass half-empty” point of view.

Is the next policy move likely to be a cut in interest rates?

While the Bank of Canada would have liked to get overnight rates much higher than the current 1.75 percent before the end of this cycle, they were unwilling to raise rates fast enough to get there. In 2015 the weakness in the economy caused by the collapse in the energy sector pushed the BOC into cutting rates, which was viewed as taking out some insurance, according to Governor Stephen Poloz. Some critics say they kept rates too low for too long, encouraging the formation of a massive housing and debt bubble.

Now, due to factors domestic and international, the economy is much weaker than the BOC had forecast.

Although the Bank of Canada is reluctant to talk about it, the housing correction that is underway in Canada will almost certainly turn into a “crash”, if declines of 30 percent or greater constitute a “crash”. In sales of higher priced homes in Vancouver and Toronto price drops have already exceeded the 30 percent threshold, in some transactions.

While the Bank of Canada didn’t use the “r” word — recession — they did cite weakness in the oil markets, uncertainty in global trade and a decline in household spending. True to the tradition of mainstream economists, they avoided discussing the possibility of a large decline in asset prices as a factor in causing weakness in the economy. This tradition is based on current economic theory, where the total amount of debt or the size of an asset bubble are ignored. Only the changes in interest rates and the money supply are considered as variables by macroeconomic models, not the size of the debt and asset bubbles that households must support as borrowers. 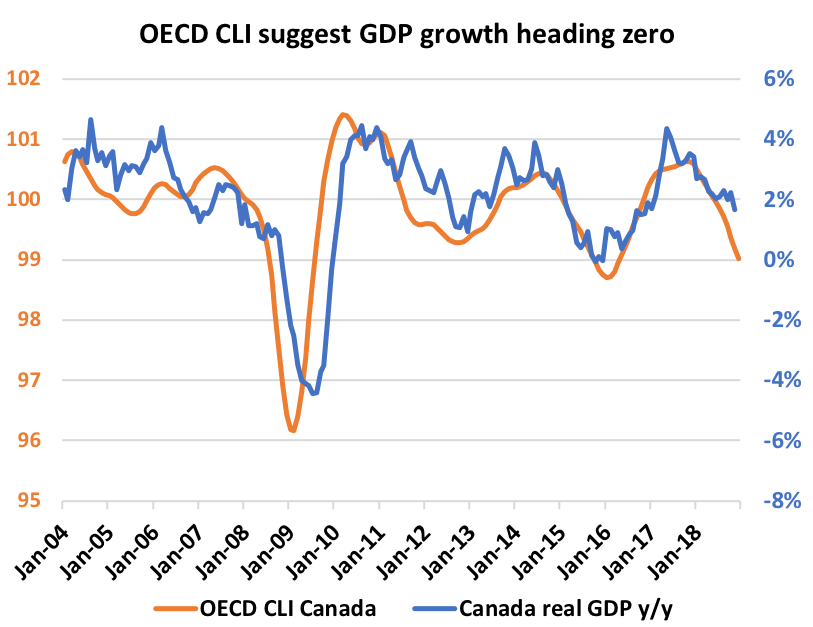 Since the total debt that households owe determines their ability to handle an interest rate increase, any increase at this time would be a negative for household consumption in countries like Canada and Australia where household debt kept growing after the 2009-2010 recession.

Households eventually wake up to the fact that their debt load is too high and then they change behaviour. That expensive trip to Europe, or the next renovation project, or a new car purchase are expenditures that can be deferred easily, when people start to worry about debt. Or, it could be that lenders start to worry about the prospective borrowers’ ability to repay the loan.

In their March 6 announcement, the Bank of Canada mentioned the “neutral range” of the rate of interest, saying that current rates are below that rate. We know from past reports that the Bank estimates ‘neutral’ to be 2.75 to 3.25 percent.

The Bank of Canada is on pause now, and the five rate hikes since 2017 might be the last increases for this cycle. The next change could be a cut in interest rates.

Prior to the Global Financial Crisis in November 2007, the BOC overnight interest rate was as high as 4.50 percent. By April 2009, during the last recession, rates had been lowered to 0.25 percent. The decade since then should have been plenty of time to get the rate back to 4 percent or even higher.

If Canada enters a recession soon, due to weakness in housing markets and consumer spending, the Bank will cut rates. But a cut in rates, from these historically low levels, won’t be enough to trigger an upturn in the economy during the deleveraging phase of this unprecedented credit cycle. We know this from more than two decades of Japanese interest rate policy when rates were cut to zero, but real estate values continue to decline.

Watch for unusual and extraordinary central bank policies, like quantitative easing and negative interest rates, when Canada enters the next recession.