China could use autos to boost slowing GDP

China is the most important emerging market economy. December data show a slowdown in growth there, sending a chill through world stock markets.

One of the key sectors in China is the auto sector, as dozens of domestic companies compete in manufacturing vehicles. Volkswagen and GM also consider China a key market.

But the auto sector slowed sharply in late 2018, with a 5 percent decrease in sales year-over-year.

Is the Chinese auto sector going to receive a stimulus package to convert to electric vehicles? 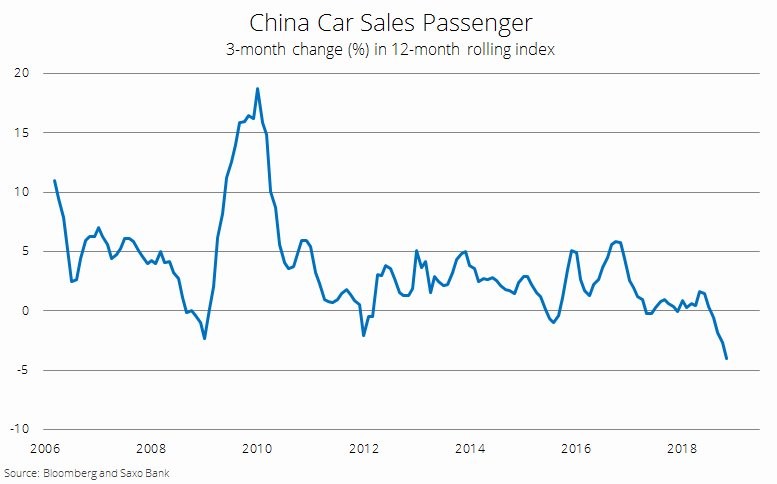 The first outright decline in 28 years in auto sales in China is getting a lot of attention.

But before people write off the sector it is worth considering what government incentives might be coming.

The Chinese government, under President Xi Jinping, announced in 2015 the “Made in China 2025” initiative. The goal is self-sufficiency by 2025 in key manufacturing sectors.

Auto manufacturing is front and centre in the Made in China 2025 plan.

Reducing pollution is another one of Xi’s top-ranked challenges and he could use the electric auto to push progress in combatting pollution.

Heavy subsidies are the key tool that China has used in the past to affect consumer behaviour. With the export sector slowing and fixed asset investment on the decline as a share of GDP, consumption by Chinese people is perhaps the best area to apply economic stimulus.

As Gregor MacDonald in “Oil Fall” writes, “China’s ability to effect policy-driven change … is a capability that has been put into action several times now.” As part of the push to stimulate the economy a reduction of dependence on coal-fired electricity production is essential. China is already making progress to eliminate coal as the world leader in the growth of solar and wind capacity. Growth in electricity production is also coming from nuclear, natural gas and hydro power, but not coal. China’s economy is already more dependent on electricity than other parts of the world, using 25 percent of total world production. But China’s electricity is still 67 percent coal, so the rapid pace of renewable adoption will have to continue, if China is to achieve its goals. 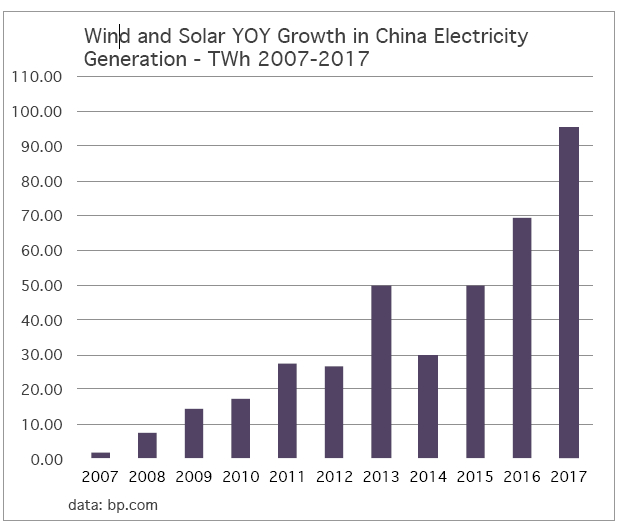 China’s auto fleet numbers 225 million vehicles now, and first-time car purchasers still make up 88% of buyers. If Chinese people bought cars at the same rate as North Americans, auto sales in China would approach 60 million annually, double the current rate. But there never will be as many autos in China per capita as in the North America. What will happen instead is a rapid increase in the manufacture and purchase of electric vehicles. One million electric vehicles were sold in 2018, about 4% of the total. By 2020, MacDonald forecasts 8% of vehicles sold will be electric, about 2 million vehicles, making China the largest market for electric autos.

The introduction of new energy vehicles in China (NEV) is a top priority. On January 8, 2019 Mr. Ning Jizhe, Deputy Head of National Development and Reform Commission, said there will be new initiatives in 2019 to support car purchases and to promote green products.

There are many companies that would benefit from a stimulus program aimed at new auto purchases and NEVs. These include Great Wall Motor, BYD, Geely, SAIC and many other domestic producers. Tesla as an electric vehicle manufacturer that will soon have a China-based factory would benefit also.

Watch for signs that the Chinese government is planning to use the auto sector and household consumption to stimulate the economy, reduce pollution, and move closer to achieving “Made in China 2025”.