Some of China’s stock market indices showed some of the worst performance in the world over the last year.

Trade uncertainty, slowing economic growth in China and a crackdown by the Chinese government on shadow banking all contributed to this sell-off.

But some highly regarded stock market analysts project that emerging markets, including China, will be the big winners over the next decade. How many investors are brave enough to take that risk?

GMO LLC (Grantham, Mayo, Van Otterloo & Co. LLC) projects a positive return for emerging market value stocks of more than 8 percent, adjusted for inflation, over the next 7 years, as of the end of December 2018. This is a compound annual return and is higher than the long-term average for U.S. stocks. Here’s GMO’s quarterly letter on emerging markets. 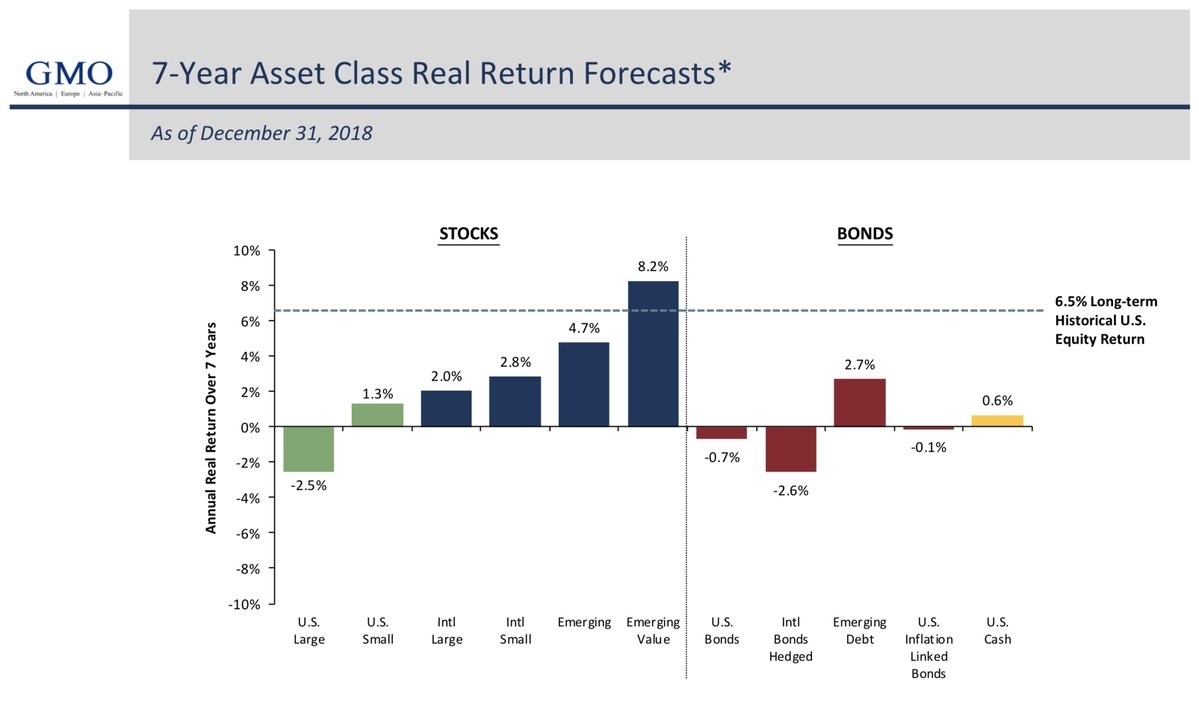 Most of the commentary about this projection focuses on the negative return in US large cap. But projected returns for emerging market value stocks compare very favourably to long-term past returns for developed markets.

Most investors are wary of emerging markets, since the volatility is much higher there than in more established markets like the U.S.

U.S. dollar strength is one of the culprits that hurts emerging markets as local currencies weaken, hurting their stock markets.

A trade war is interpreted as negative for emerging markets like China, as much of the growth in economies like China involves selling goods to developed markets, especially the U.S.

Emerging markets is a term that applies to markets like China, India, Brazil, Russia, Indonesia, Taiwan, Thailand, Malaysia, South Korea, South Africa, Chile and other parts of the world where markets are not as developed as the U.S., Europe and Japan. There are $1.8 trillion in stock market capitalization in that index, about 10% of the world’s total.

China dominates the weighting in the MSCI Emerging Markets, with a weighting of 31 percent. This means that China is too big to ignore for institutional investors that have a mandate to invest globally. 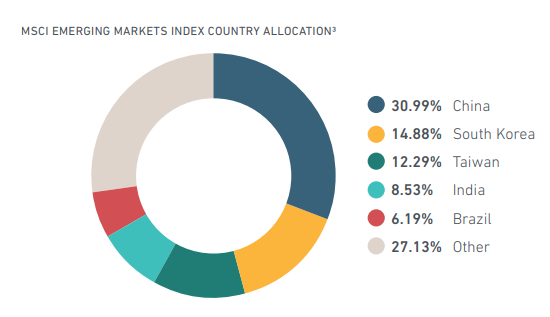 “A” shares are those that trade on China’s domestic exchanges, primarily Shanghai and Shenzhen. And those are the markets that took the largest hit last year, after their partial inclusion in the index.

Here are the top ten constituents of this A-share index:

Financials represent the biggest share of this index, and other China-related indices.

In fact, some of the biggest banks in the world are Chinese, as measured by assets.  The largest 4 banks are Chinese:

Industrial and Commercial Bank of China US$4 trillion in assets

Agricultural Bank of China US$3.2 trillion

Bank of China US$3 trillion

JP Morgan and Chase US2.5 trillion (largest US bank by assets)

But these Chinese banks don’t rank as high in stock market value, with US banks ranking higher in some cases. The stock market sell-off of 2018 hit Chinese banks harder than other banks in the world, and banks are usually considered a “value” investment.

How many investors are willing to sell Alphabet, Apple and other similar companies to invest in Chinese equities?