The BOC goes on pause for now

But in the media release Governor Stephen Poloz insisted that rates are too low and further hikes will be necessary, “over time”.

Will the Bank of Canada keep hiking rates in the face of growing uncertainties in the Canadian economy?

During the question and answer period after the announcement the Governor used the hockey meme originated by Wayne Gretzky, and repeated by thousands since, that says something like, “I go where the puck will be rather than where it’s been”.  It’s not clear how continuing to hike rates fits into that scenario. But if the Governor means that he is looking out 18 to 24 months he will realize that the current downturn in the housing market will become the main event of that time period.

While recognizing that economic growth rates worldwide will slow, and that the Canadian oil industry is experiencing another downshift in investment, Poloz stuck to his theme that the Canadian economy is bumping up against capacity. In that world, any slight slowdown in Canada will be a welcome relief that will introduce a bit of slack into an economy that, in his view, is in danger of overheating.

For the last five years we’ve seen the BOC dance around the issue of housing market risk. And with this release they seem to be missing a huge change in that risk. That new factor is the definitive slowing in the housing market, resale and investment, and the predictable effect that will have on household consumption, debt and employment.

In fact, on page 21 of the report they removed “stronger consumption and rising household debt” from a list of key risks. I guess they mean that debt can’t go any higher.

And it’s correct that the rate of growth of debt is already slowing. The key risk now is what happens to GDP and consumption when households try to reduce their debts.

Debt has grown throughout the last five years during this Governor’s term and before that under his predecessor, Mark Carney. While the BOC isn’t the only contributor to this dangerous situation, the insistence on keeping interest rates and mortgage rates very low was a major influence on the Canadian desire to go deeper into debt.

We saw how in the U.S. the housing and mortgage crisis in 2006 morphed into a major recession. The household debt burden at the time of the crisis, starting in 2005, was similar in the US and Canada. 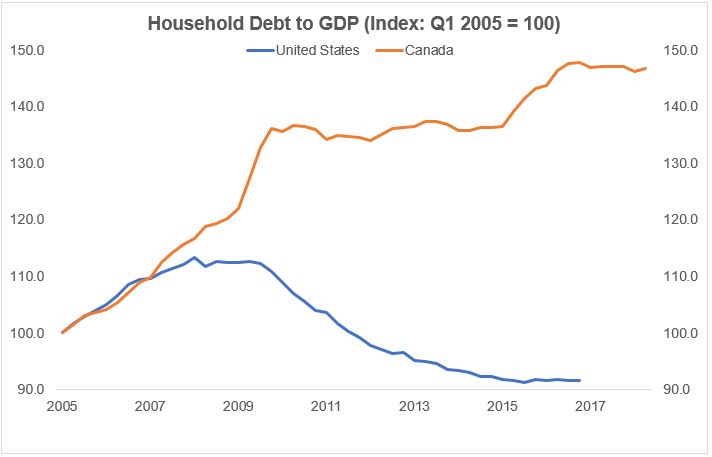 Since the start of the global financial crisis the two countries have diverged completely regarding household debt. Canadian mortgage lenders have pushed full steam ahead, with the approval of the Bank of Canada and the regulator, OSFI, while the US has gone through a period of deleveraging, with US households regaining a semblance of normality in the debts.

In order to avoid a nasty recession, the Canadian government and the central bank decided to use residential real estate as an engine of growth. It worked, perhaps too well.

The misdirection of investment into a non-productive asset (housing) and the massive increase in household debt dictate that the BOC’s options today are very limited. Any attempt to raise rates much further will likely trigger a recession as consumer spending tanks due to an inability of many households to cope with their debts.

And keeping rates artificially low indefinitely just inflates the housing bubble even further and makes the eventual bursting of the bubble even more destructive.

If the Bank of Canada’s announcements seem to be contradictory at times remember they face an impossible task.