The end of the Greenspan Put

The Federal Reserve open market committee hiked rates again. The stock market didn’t like what Fed chair, Jerome Powell, said at the news conference on Wednesday, and what he didn’t say.

Since 1987 when then chair of the Federal Reserve, Alan Greenspan, rescued the stock market after a 20 percent drop, the Fed has been cast in the role of enabler-in-chief of stock market bubbles.

Is the market right to be worried that the Fed’s role as stock market cheerleader is coming to an end?

In 1987, Alan Greenspan started something that has been an expectation of Wall Street traders for more than three decades. On the morning of Tuesday, October 20, 1987 he directed Fed staff to call the New York banks, telling them to advance all the money needed to support the short-term liabilities of stock brokerage firms.

Greenspan acted after a call from the head of the New York Federal Reserve, Gerald Corrigan, who told him, “it’s up to you. This whole thing is on your shoulders.” That day established the “Greenspan Put,” which is the unwritten rule that stock market traders can count on the Fed to support them if the market crashes. That “Put” survives to this day, reinforced by the Fed actions during several crises since 1987.

Because of the weakness of the stock market since early October of this year, Wall Street had become increasingly vocal about their desire for the Fed to pause rate hikes, to help the stock market resume its upward trend. The market, as measured by the Dow Jones Industrial Average, has declined by about 3,500 points, or 13 percent, from the October peak. 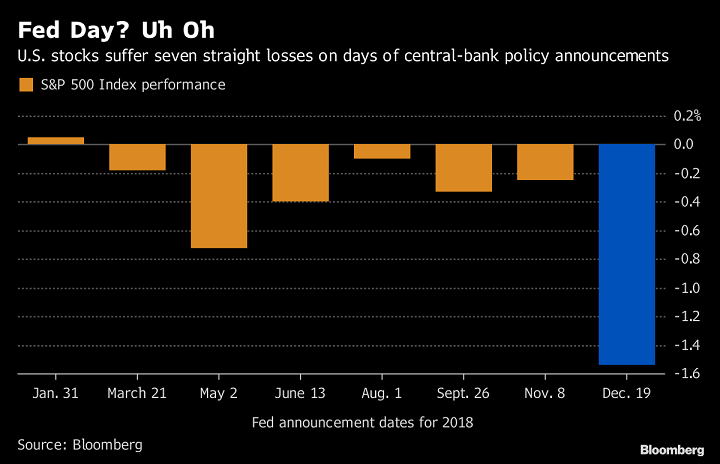 Jerome Powell took over as the 16th chair of the Federal Reserve in February 2018. As happens with Fed chairs, Powell’s resolve to stick to the principles of central banking will be tested at some point in his tenure.

Since the dual mandate of the Fed is to keep inflation under control and to promote maximum employment, Powell might choose to ignore the fluctuations of the stock market, at least in the early part of his term.

In the news release this week, chair Powell and the Federal Open Market Committee said:

“The Committee judges that some further gradual increases in the target range for the federal funds rate will be consistent with sustained expansion of economic activity, strong labor market conditions, and inflation near the … objective over the medium term.”

Not one mention of the stock market and its weakness. Not even a slight nod of the head to Wall Street and a wink as if to say, “don’t worry, we’ve got your back.” As a result, the market sold off sharply on Wednesday afternoon.

Powell is a lawyer and lawyers consult written documents, such as the Federal Reserve Act of 1913 that sets out what the Fed is supposed to do.

That statute directs the Fed to support lending to agricultural and industrial activities but specifically prohibits supporting the “carrying or trading in stocks, bonds or other investment securities”.

Powell indicated that there will be two more rate hikes in 2019. He also stated that the Fed will continue to reduce its balance sheet, a hangover from Fed interventions in fixed income markets over the last decade.

The Fed under Powell is acting the role of an overly indulgent parent who decides to try some “tough love” on its child. The parent can expect more than a few tantrums. When it’s Wall Street that’s throwing the tantrum, the Fed and the government will need steely resolve not to blink first.

2019 could be the year that the Greenspan Put is finally declared dead. But don’t expect Wall Street to accept that outcome quietly. And, if the market drops 20 percent in one day again, the Fed will probably set aside its principles and move to support the market.