Volatility is good for value investors

World stock markets are experiencing unusual volatility during 2018, and some markets, like China, are down more than 20 percent from the start of the year.

Political upheaval in the U.S. and Europe is nearly a certainty in 2019, as U.S. election results are bound to lead to more confrontation between the White House and Congress. Germany’s Angela Merkel will step down, possibly triggering an election and her centrist coalition may not hold power. The March 29, 2019 Brexit deadline will come into focus in the new year.

This degree of uncertainty is likely to cause even more market volatility.

As described in the note from August 23, 2018 called “Emerging Markets are Cheap” (insert link to website) world markets are moving in different directions as emerging markets (EM) are cheap compared to U.S. markets. Since the beginning of 2018 the emerging markets index, heavily weighted with Chinese equities, is down 20 percent, qualifying as a bear market.

For those who like to chase bargains, known as value investors, it has been a tough market for the last few years. Momentum investors, who like to buy the stocks with the fastest gains, have done very well by concentrating on the U.S. market. Companies like Amazon are usually considered too expensive for value investors, but they’ve been strong performers for momentum and growth adherents.  Value in the U.S. stock market has been hard to find. But with increased volatility and uncertainty, bargains may soon appear, even in the U.S.

The U.S. will see turmoil as the Democrats in the House of Representatives take over control of the powerful committees that can investigate the White House, the Trump campaign and President Trump’s personal finances. In 1974, the stock market sold off by about 50 percent from mid-1973 to late 1974, bottoming shortly after President Nixon resigned.

Europe, although cheaper than the U.S. by some measures, is weighted heavily to automobiles with companies like Volkswagen, BMW, Mercedes and Fiat Chrysler as well as financials and pharmaceuticals. Some analysts say that Europe isn’t likely to be strong as earnings are not expected to grow fast enough. Others recognize that European financials are very cheap and value investors have been buying.

The group of stock markets that looks the least expensive is EM, dominated by China. A popular measure of value, the Shiller P/E is at 10 in EM compared to over 30 in the U.S.

GMO rates the EM sector as having the best chance of earning decent inflation-adjusted returns over the next seven years. And, if the bear market in EM continues to push prices lower, GMO’s projected returns will improve from the 3.2% annual rate shown: 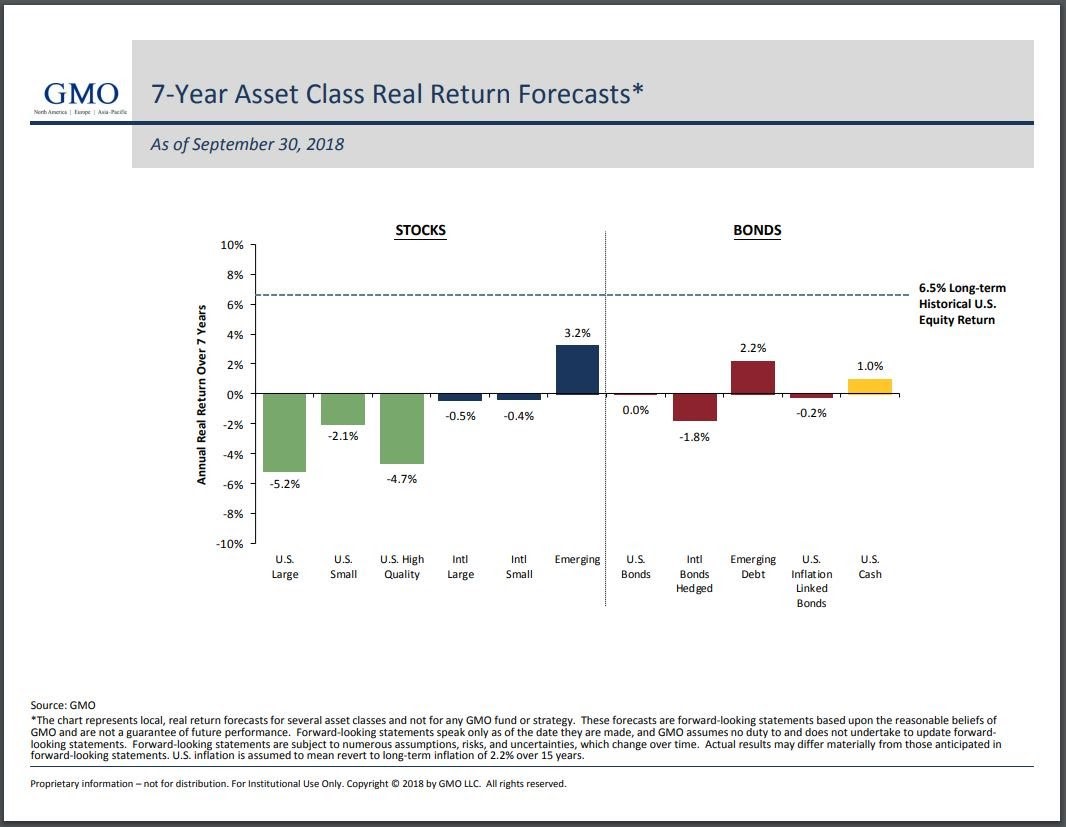 Technology is the biggest sector weighting in emerging markets, at 30% of total value, and many of those companies, such as Alibaba and Tencent, are in China. Concerns about Chinese technology companies include complaints from the U.S. and others about lack of protection for intellectual property.

Other EM countries like Mexico are cheap, and the currency is also attractive against the U.S. dollar because of the recent concerns over NAFTA and some worry about the direction of the new government that takes over in December.

If market volatility increases, and builds into a full-fledged bear market, start to get ready to make some moves into more inexpensive markets. Genuine bargains might be coming in 2019.