What four decades in the investment world has taught me

An anniversary marking 40 years for me as an investment advisor arrived on November 1 this week.

When I started as a stockbroker in 1978 I remember calling people to talk about Canada Savings Bonds that earned 9.5% interest.

Since then bond yields have shrunk to low single digits but stock market gains, especially in U.S. markets, have been spectacular.

What has changed since 1978? What is likely to happen over the next forty years?

Let’s start with what the investment industry was like and what has happened since.

In 1978 brokers had a telephone as the main tool to contact people. Many calls were placed each day with a recommendation or an investment idea. And we also received calls, since this was pre-internet days, as clients had to call to find out stock prices. “How’s the market doing today?”

This was my workplace: 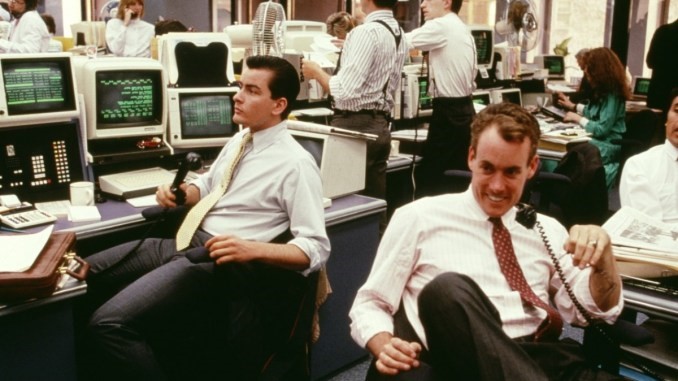 This image is from the 1987 movie “Wall Street,” but it’s a reasonably accurate representation of the room. Everyone could hear what was said, and there would be a flow of energy and a sense of urgency when everyone was on the phone. Brokers survived because they came up with investment ideas that made money for their clients.

Today, the investment world is very different. The phone has been replaced by email and face-to-face meetings. “Hot stock” ideas are out, and wealth management is governed by discretionary portfolio management agreements. This is a big improvement because a longer-term approach to investing is now possible, although there is substantially less client/advisor interaction.

What has happened in the markets since 1978?

The most important U.S. stock market index, the S&P 500, was quoted at 94 on that day in 1978. Today, after many corrections, a few crashes and many years of growth, the S&P 500 trades 28 times higher. And that doesn’t include dividends of about 3%. Counting reinvested dividends, annual returns increase to 11.7%. This amounts to 83 times the original investment! 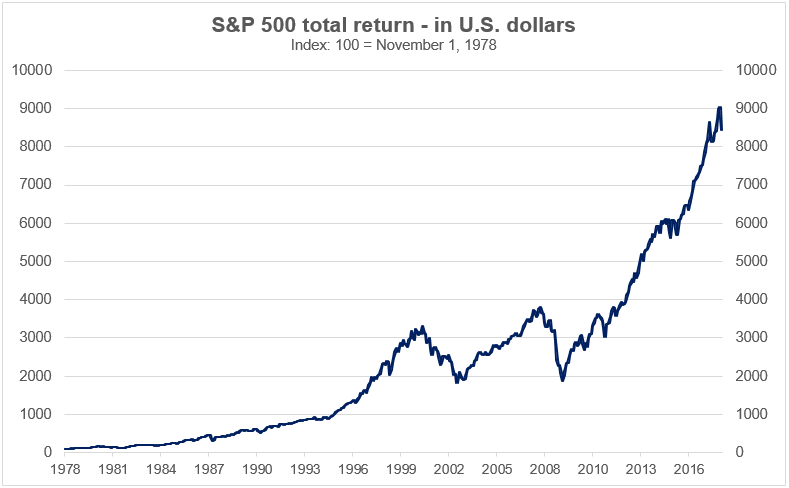 Most of my original clients from the late 1970s did very well. Not one person I know captured the entire S&P 500 gains, including me, since it seemed too risky to put all our money into the U.S. stock market and keep it there.

What is likely to happen in the next four decades?

“It’s tough to make predictions, especially about the future.” Attributed to various people, including Yogi Berra and Neils Bohr. 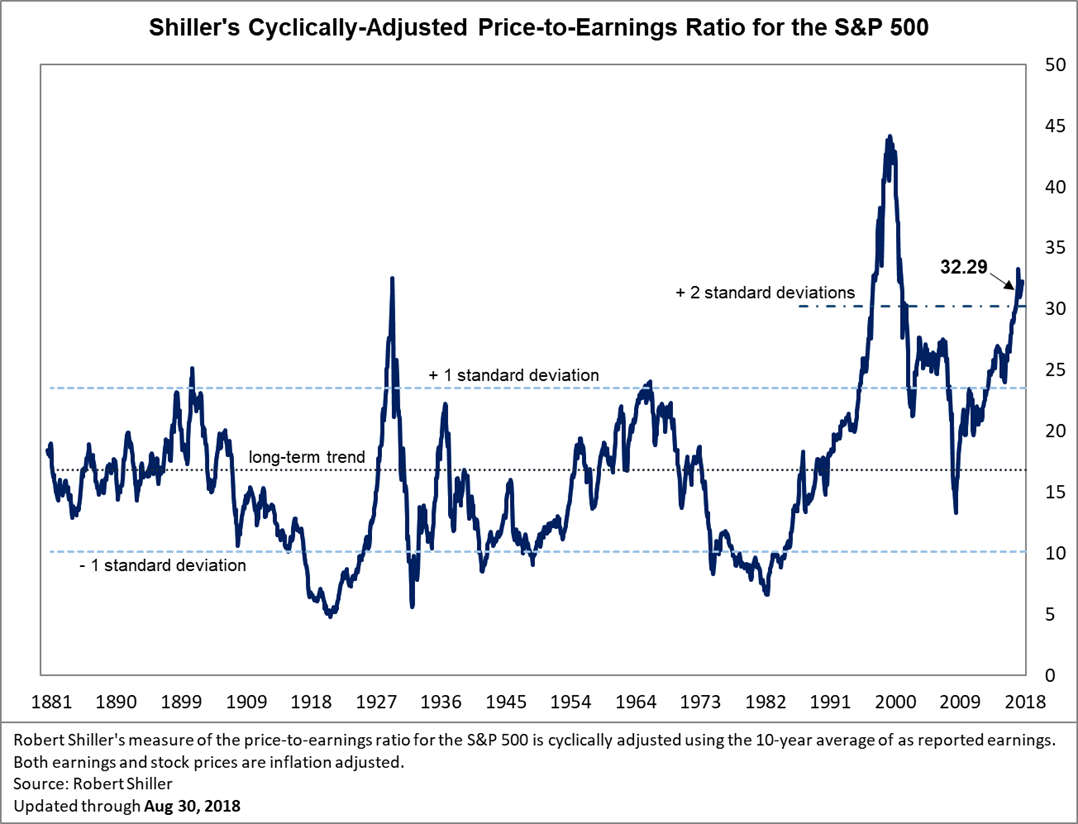 It’s easy to see how cheap the market was when I started, at less than 10 times, and how expensive it is today, at more than 30 times. We can see that the last two times this happened, in 1929 and 2000, the market corrected sharply.

The track record for future stock market performance when the index is above 30 is abysmal, as can be seen here calculated by Shiller: 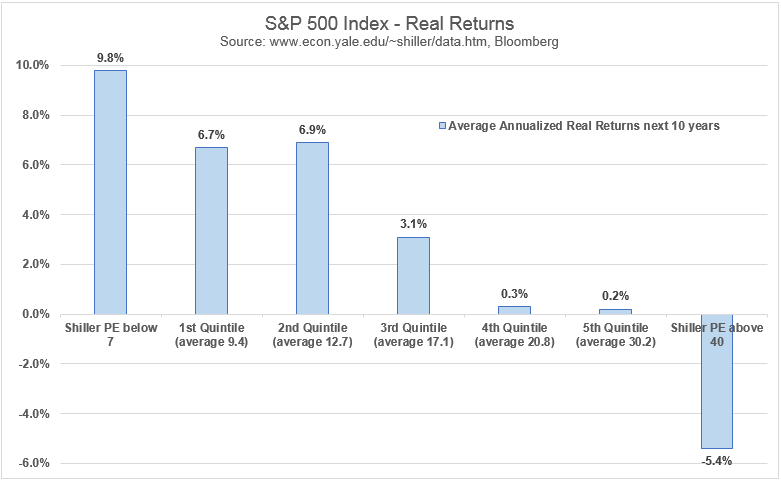 The S&P 500, even after the October correction, is still in the 5th quintile, meaning that positive real returns are likely to be much smaller in the future.

After 40 years of phenomenal returns the U.S. market dominates the world at more than 50% of total value compared 15% in 1899: 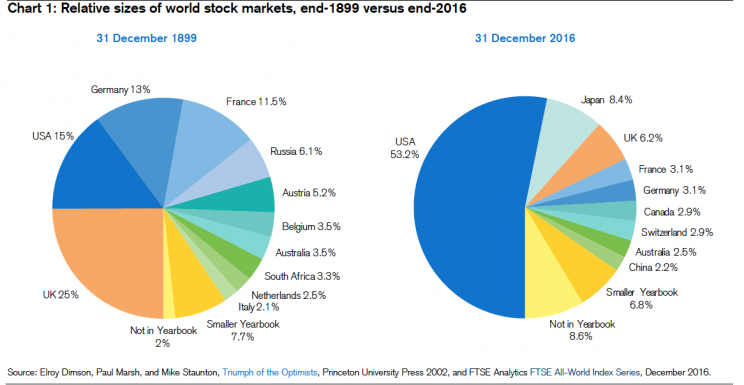 So here goes with predictions about the future:

It’s extremely unlikely the U.S. stock market will dominate for the next forty years. Other markets will grow faster and, therefore, give better returns.

One candidate to replace the U.S. in top spot is China. China’s economy is likely to surpass the U.S. in size, measured by GDP. And its stock market, at just 2.2% of the world’s total, will increase even more.

While it seems very risky to invest in China and other less-developed countries, I remember that it seemed too risky to invest in the U.S. stock market back in 1978. That’s why people most people bought Canada Savings Bonds instead.

This is not a recommendation to buy shares listed in China, but it is a suggestion to consider stock markets outside of North America. The U.S. returns were very good for a long time but, as the saying goes, “past returns are not indicative of future results.”