The Bank of Canada gets serious about inflation

The Bank of Canada hiked rates this week and said that there is no longer any need for monetary stimulus.

The Bank of Canada rate now stands at 1.75%, the third hike this year. The so-called “neutral” rate could be 3% or even higher.

It’s clear that the Bank of Canada (BOC) plans to raise rates much higher even though large numbers of Canadian families are overwhelmed with record levels of household debt, owing too much on their mortgages, auto loans and credit cards.

Will the Bank of Canada’s move to higher rates trigger a severe recession?

“The reality is the economy is running at its capacity and it is no longer needing stimulus and so it’s our job to prevent the thing from overheating,” Bank of Canada Governor Stephen Poloz said at a news conference following the decision.

I have been saying that central bankers will continue to hike rates until the next recession.

As we’ve learned from many previous crises, economists are unable to predict recessions, so there’s no warning before a recession starts. So, it follows that central bankers, who rely on other economists for their forecasts, are unlikely to stop increasing interest rates before the start of a recession.

As well, economists don’t recognize the overall level of debt. Only the interest rate, or the cost of debt, is used as a variable in their models. Obviously if Canadians had only very modest debts the Bank of Canada could raise rates to 4 or 5 percent and there would be little impact. But that isn’t true today. At more than 220 percent of GDP, private sector debt has never been this high. Warnings from international bodies like the Bank of International Settlements about this level of debt have been ignored by Canadian authorities. Canada has led the developed world in adding debt since 2011. 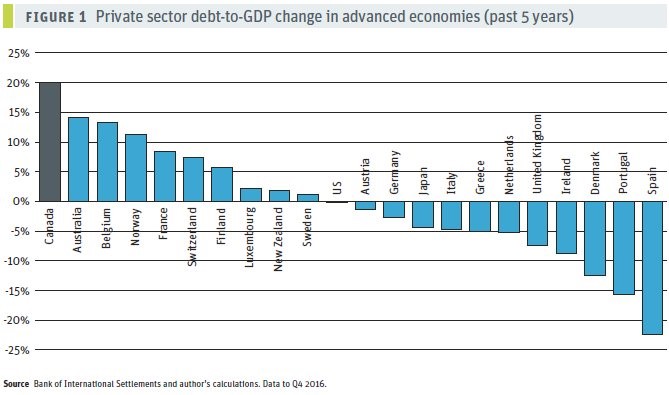 From “Addicted to Debt” by David MacDonald, CCPA

The playbook for central bankers goes like this: Central bankers watch for signs that inflation is growing too quickly (as measured by the CPI) and then they act decisively, using their main policy instrument — interest rates — to choke off a destructive bout of rapid inflation. They want to act before expectations of higher inflation become lodged in the psyche of the average Canadian.

From their press release:

“Governing council agrees that the policy interest rate will need to rise to a neutral stance to achieve the inflation target.” [The inflation target that is currently used by most central bankers is 2 percent.]

That means that more hikes are necessary since, at 1.75%, the rate is well below the “neutral” level. Although no economist knows what the “neutral” level is, everyone agrees that it must be higher than the current rate. So, expect a December rate hike, and several more hikes next year until the BOC rate touches 2.5 to 3.5 percent, their estimate of the “neutral” rate.

If the BOC stops hiking rates before they reach this level, it means that a recession has already started or there’s a financial crisis and a housing crash.

As the caption in the 1932 cartoon by Thomas Fuller, showing two locomotives speeding towards each other on the same track, said:

“What a way to run a railroad!”

What is needed is a way to recognize the debt problem long before leverage ratios reach the danger zone. But that mechanism doesn’t exist yet and the Bank of Canada isn’t equipped to act in that role.

Instead the people at the Bank of Canada will continue to play the game they know — monitoring inflation while hiking rates until the next recession arrives.