World oil prices are at cycle highs recently with the benchmark Brent at US$80 and the North American West Texas Intermediate (WTI) at US$70.

But in Canada, the Western Canada Select (WCS) price is below US$20.

This gap of US$50 to WTI is shocking.

Will the price for a key Canadian energy export recover soon enough to save the industry? 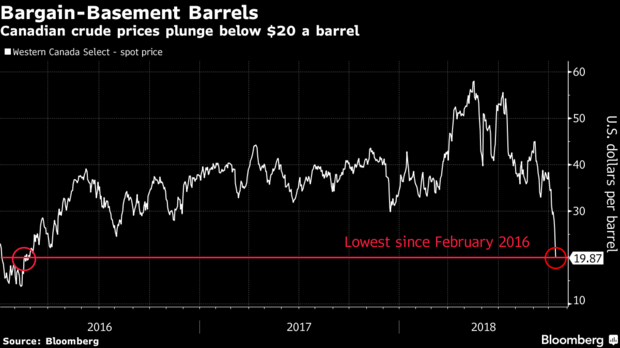 Rising production from oil sands along with a lack of pipeline capacity to move that product to the US market gets the blame for this extremely low price. On October 12, the price for WCS fell to US$15.97, as of yesterday the price has returned to US$19.75. 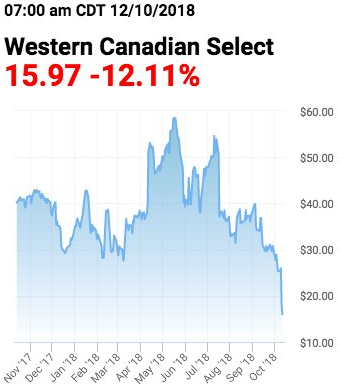 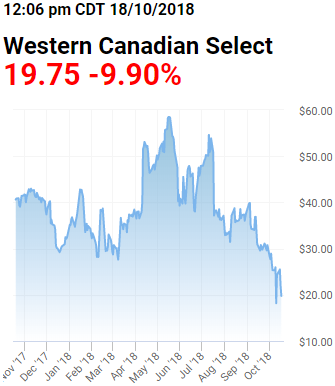 One solution that should have been in place by now is the Keystone XL pipeline that was approved years ago but keeps hitting new roadblocks. This pipeline is the 4th phase of an existing pipeline system that moves crude to the US refineries that are well-suited to handle Alberta’s heavy crude. The new XL phase would handle an additional 830,000 barrels per day but won’t be on line until 2021, if it goes ahead. Nebraska’s highest court has yet to rule on another legal challenge to the route.

The Line 3 expansion owned by Enbridge is expected to open in 2019 at a cost of $7 billion and will move 370,000 barrels per day to Wisconsin where there is refining capacity for this type of crude.

The Trans Mountain expansion would handle 590,000 barrels per day, but that project is held up by a new Canadian Supreme Court ruling that requires a new consultation process. The court ruled that the consultation must be concluded by February 2019, but the expansion probably won’t be completed until 2021 at the earliest, if it goes ahead.

Railcars are busy carrying as much crude as they can but there are limitations to what can be handled. The record high volume by rail is about 200,000 barrels per day. The cost of rail is about three times the cost of pipelines, at about $15 per barrel.

The Northern Gateway pipeline, on an entirely new route, would have opened new markets in Asia as an outlet for excess production in the Canadian oil patch. That route was rejected as it was felt the transport risk was too high with large oil tankers traversing channels through the islands of the west coast.

At least one large oil sands producer, Cenovus Energy Inc, has stated that they might be forced to slow their expansion plans if no new export capacity is built. So far, no Alberta producers have mentioned restricting existing production due to low prices.

At the very least any new projects will be put on hold in the face of this discount pricing that would force producers to sell at a loss.

So far, the stock market is treating large Canadian producers quite well despite these difficulties.  Suncor (SU) trades 3% higher than a year ago while Cenovus (CVE) is down only 7%, (prices as of October 11, 2018).

On July 26 2018 Cenovus reported its second quarter results with production of 518,000 barrels per day, an increase of 6% from the first quarter. But the price received during the period was based on US$65 WTI and C$55 for an average differential in the first six months of C$21.77. Since June 30 the price differential has more than doubled.

With the discount at US$50 the economics of the Canadian oil sands is turned upside down. If prices were to stay at these levels, the impact on Alberta and Canada would be substantial.

One of Canada’s most important industries is at risk. The latest discount price will bring heightened urgency to the discussion.