Shares of gold mining companies have never been cheaper, by several measures. Gold miners’ share prices have been drifting lower since 2016 as the S&P 500, led by a few large technology companies, keeps hitting new highs.

This year, stock market values of major gold mining companies are down from 20 to 34% against a U.S. stock market which is up by 8% so far.

Is it time for a rebound in gold stocks?

We hold gold mining companies for ourselves and our clients as a hedge, primarily against a weakening U.S. dollar. Since the dollar keeps gaining strength that hedge hasn’t paid off, at least not yet.

The discount of the gold miners’ index to the S&P 500 looks like this: 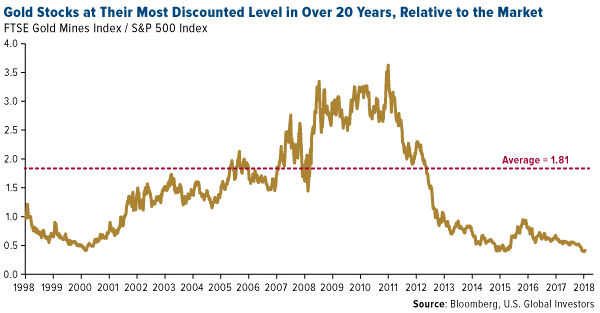 The last time the discount was this large was in the late 1990s when people were putting their money into internet and dot-com companies, which was a bubble that burst in early 2000. Soon after gold stocks started to rebound and kept going until 2011, on a relative basis.

A turning point may have happened again in late September when giant miner Barrick Gold agreed to merge with smaller rival Rangold Resources to form New Barrick, which will be the largest gold miner in the world, if the deal goes through. A deal of this size is rare, and could set off a chain reaction of deals, perhaps leading to higher valuations for companies in the sector.

So, the gold mining shares are attractive, but what about the price of gold itself?

A couple of things must happen before the price of gold moves higher. First, since gold is measured in U.S. dollars, the current strength in the U.S. dollar must change to weakness. This might happen next year because, after the large tax cuts, budget deficits will balloon to 6% of GDP or one trillion dollars. Since the Fed is unlikely to raise rates quickly investors might start to worry about inflation coming back.

Also, in an escalating trade war between China and the U.S., there will be inflationary pressure. Cheap goods from China will become more expensive due to tariffs.

The oil price surge could reach $100 per barrel which will feed a higher CPI number.

This is great fuel for gold bugs who will start to talk about the Fed monetizing the U.S. government debt by “printing money”.

As well, other countries may decide that they don’t wish to hold reserves in large amounts of U.S. dollars. Currently the Chinese government has about $3.2 trillion while Japan holds about $1.2 trillion. These dollars would lose part of their value if the U.S. government were to allow inflation to go higher than interest rates.  One alternative is to move some of those dollars into gold.

It has been unfashionable to hold shares of gold mining companies as a hedge. That’s one of the reasons the discount reached such extremes. This could be the contrarian trade idea that really pays off in the next couple of years.