BCA Research’s annual conference delivered some great investment ideas this year, over two jam-packed days, to an audience of about 300 portfolio managers and investors from all over the world. There were some surprising forecasts, in an environment of heightened uncertainty in the world.

This year the conference was moved to Toronto and featured more Canadian content than usual. Presenters included the former Prime Minister of Canada, Stephen Harper, former Chair of the Federal Reserve Janet Yellen, and many others including me. I presented on Canada’s housing bubble and how it compares to other countries with bubbles, past and present. I added a section on how money is really created (hint: it’s not how the textbooks show it) that was new information to most people in the room.

The international audience was very interested in the Canadian housing bubble thesis with several people coming up to me after to share their experience from their home base. House prices in Australia, New Zealand and Denmark, among other places, are causing a lot of angst. It’s clear that the twin ideas: house prices always go up, and that it’s safe to borrow massive amounts of money to buy real estate, are narratives that have taken hold globally.

One of the BCA’s researchers pointed out that real estate in Germany and Italy is still exceptionally cheap. On the other hand, Sweden and Norway are expensive, on par with Canada. There are a few companies in Europe, such as Deutsche Wohnen, that give exposure to inexpensive real estate markets. Or, this could be a great time to buy that Tuscany villa that you’ve always coveted (not recommended, of course).

Another analyst presented the non-consensus view that oil prices could rise to $100 or higher, or perhaps even spike to $200. Market price spikes would be temporary but could last up to a year. In the last few decades every time there has been a spike in oil prices during a cycle of Fed-induced rising interest rates, a recession immediately follows. When the recession hits, the demand for oil is reduced and oil falls back. A recent cycle followed that playbook starting in 2008, when oil hit $140 and then plunged to $30 in 2009 during the global financial crisis.

Factors that would cause a surge in pricing to $100 would be a shortage of supply and strong demand. On the supply side, the issues are the new U.S.-led sanctions on Iran, the collapse of Venezuela and issues with getting U.S. shale oil to market due to a lack of pipeline infrastructure. Canadians can identify with that!

On the demand side, consensus estimates show an increase of 1.8 million barrels per day due to emerging market demand and a strong U.S. economic recovery.

In particular, supply issues could appear with Iran’s reaction to sanctions and a lack of spare production capacity in Saudi Arabia. These issues are underappreciated by the market, according to this view. A supply shock could cause a price surge followed by demand destruction (due to high prices) and a U.S. recession in late 2019 or 2020. 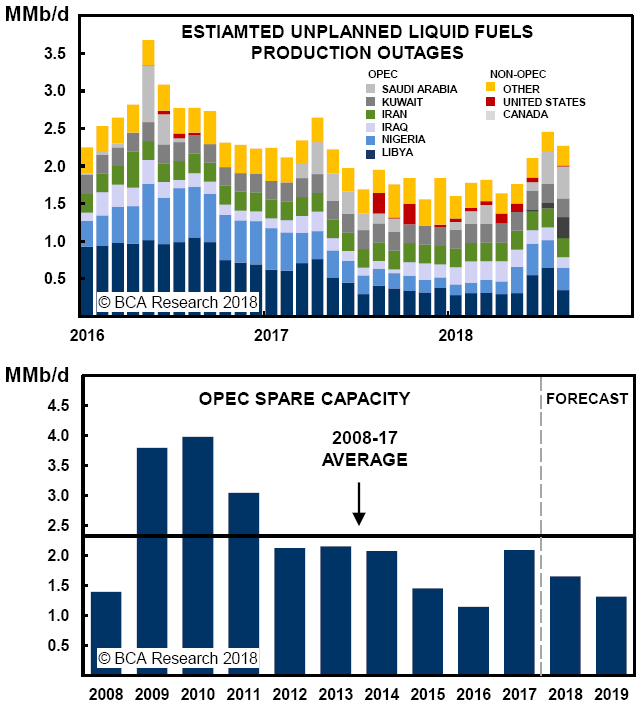 The probability of this happening is less than 50%, but it would be very surprising to most investors. One would have to be a nimble trader to take advantage of such violent price moves, so it is not recommended.

If you would like more information about these ideas or about my presentation on the housing bubble, please contact Fraser Betkowski.