No one saw it coming

Recent news articles focused on the tenth anniversary of the Lehman Brothers failure and the global financial crisis that followed.

A theme runs through much of the commentary; that no one could have foreseen the 2008-09 crisis.

That narrative is wrong. There were some who forecast the 2008 financial crisis, in writing, with analysis to back it up, but their warnings were ignored.

In his 2005 testimony to Congress, then Fed chair Alan Greenspan, known as “maestro”, made this now-famous remark: He said that the U.S. housing market might be showing “signs of froth” but there is no bubble.

In 2008, the Governor of the Reserve Bank of Australia said, “I do not know anyone who predicted this course of events.”

In 2009, the chair of the Basel Committee and president of the Dutch branch of the ECB said, “no one foresaw the volume of the current avalanche.”

Today most people have accepted this narrative. But it is misleading to say that the forecasting failure was universal.

While most economists didn’t see “it” coming, a few did. Dirk Bezemer, University of Groningen, identifies a dozen people in a 57-page paper in 2009 called “No one saw this coming”.

He found that the dozen accurate forecasters had a common approach. Unlike mainstream economics, the prescient economists used a “flow of funds” approach. Wynne Godley, a British economist, used a “sectoral financial balance” that emphasized the importance of private sector debt imbalances that can trigger a recession. 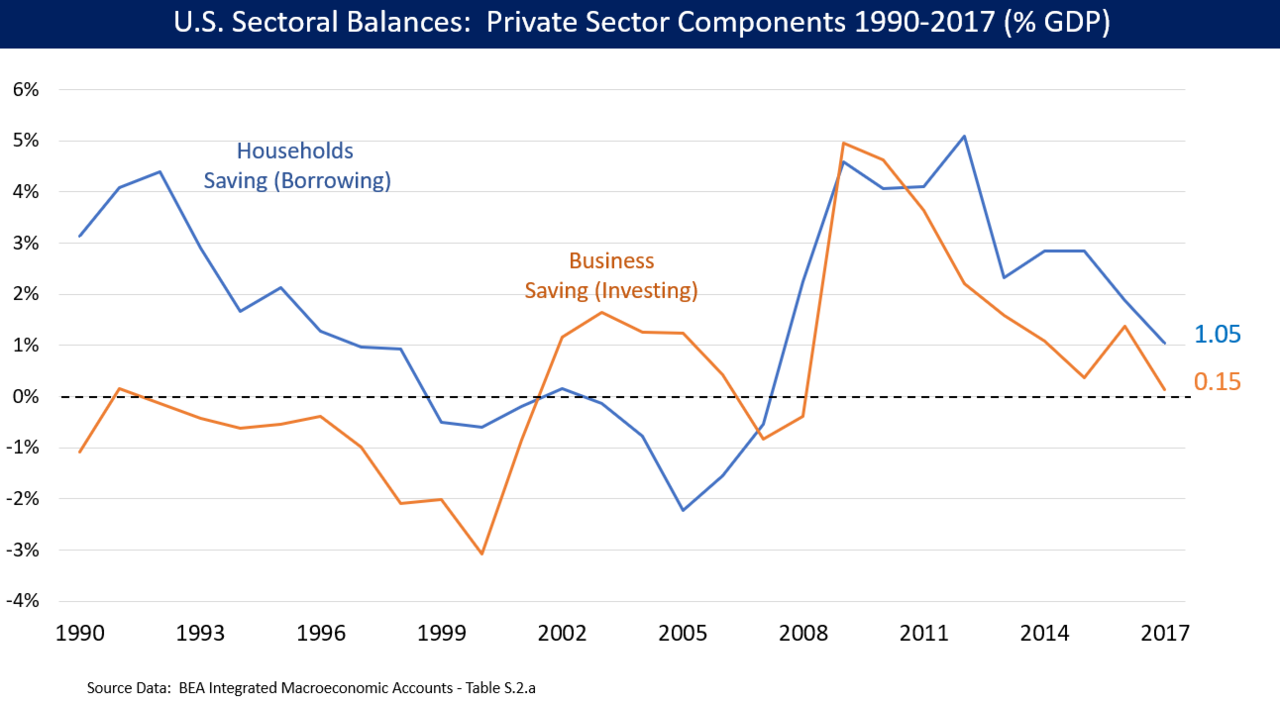 Godley’s chart shows the balance in the business and household sectors. The household sector went heavily into deficit prior to the crisis, as households borrowed aggressively to acquire real estate. It was easy for Godley to see the problem.

Steve Keen, originally from Australia and working in England, is arguably the best known of the small group of economists who are working on a more realistic approach to studying the economy. His Minsky Model shows the flow of funds in the economy. Keen cites Godley as a key influence on his work.

Mainstream economics and general equilibrium models ignore “finance, insurance and real estate”, known as FIRE. Liquidity from the FIRE sector flows into the “real” economy, allowing for business investment, consumption and speculation in real estate and the stock market.

The rapid expansion of the FIRE sector over the last few decades, called “financialization”, makes it likely that we will experience more severe bubbles and crashes.

The elevated state of private sector indebtedness in Canada and Australia puts both countries in danger of a financial crisis. The inevitable correction in house prices will trigger a recession, which will make the private sector debt burden even more challenging to manage. If both households and businesses try to reduce their borrowings, the economy will go into crisis.

But despite the impressive and convincing work of Keen, Godley and others, their views are not yet in the mainstream. As well, people prefer to listen to authorities who make reassuring statements about risks:

“Household debt “poses risks to the economy and financial stability, and its sheer size means that its risks will be with us for some time. But there is good reason to think that we can continue to manage these risks successfully…”

So, don’t be surprised if you hear, after the next financial crisis, that no one could have seen it coming.