When the Bank decides

Recently I attended The Oxford Central Banking Senior Executive Programme. Five days of presentations and discussions reinforced my understanding of the process of creating money — 97 percent of money has been created by commercial banks when they make loans.

Some of the experts that presented at the conference discussed the implications of the money creation process for avoiding asset bubbles and encouraging sustainable economic growth.

I wrote about money creation by commercial banks in September 2017, “Money Creation is not what people think”, quoting Professor Richard Werner, who hosted the program at Oxford University, England on money and central banking. The expertise of the people gathered, both presenters and attendees, was impressive and generated a lot of ideas and arguments. Money creation was not the only topic, but it is key to understanding how the economy works.

To recap money creation: There are three explanations of how money is created. The first two are widely known and appear in most textbooks. These are the theories of “financial intermediation” and “fractional reserve multiplier”. In these theories the money for bank loans comes from wealthy depositors.

The third explanation, less widely accepted, is that banks create money out of thin air, adding the loan amount to both the bank’s assets and liabilities (customer deposit). According to the Bank of England, in a Q1 2014 paper, almost all “money” is in deposits created when banks make loans.

The authors of the paper state that “banks do not act simply as intermediaries, lending out deposits that savers place with them, and nor do they ‘multiply up’ central bank money to create new loans and deposits,” refuting the popular textbook explanation.

For those who wish to dig deeper, Professor Werner has published several books and papers including, “A Lost Century in Economics: Three theories of banking and conclusive evidence”. He is also known for coining the term “quantitative easing”.

If we accept that banks create new money in the form of deposits by lending, it follows that banks make important decisions in their lending activities. There are rules, and banks are under the supervision of regulators and central banks. But it is largely up to the banks to decide where the newly created money goes.

There are three main channels for allocation of newly created deposits. Two activities are captured in GDP transactions. The first GDP-related category, consumption, for example the purchase of a car, doesn’t add to the productive capacity of the economy. The second GDP-related activity funds additions to productive assets such as a factory or in research and development or new technology or infrastructure. These investments usually create enough income to cover the cost of servicing the loan.

In Canada banks have been following incentives that encouraged lending for residential investment and housing, making it easy to create new money through mortgage loans.

This month The C.D. Howe Institute released a study, “Tooling Up: Canada Needs More Robust Capital Investment”, showing that Canada lags the U.S.  and others by a wide margin in business investment. Canada invested an average of $13,900 per worker compared to an OECD average of $19,700 per worker and $23,200 in the U.S. 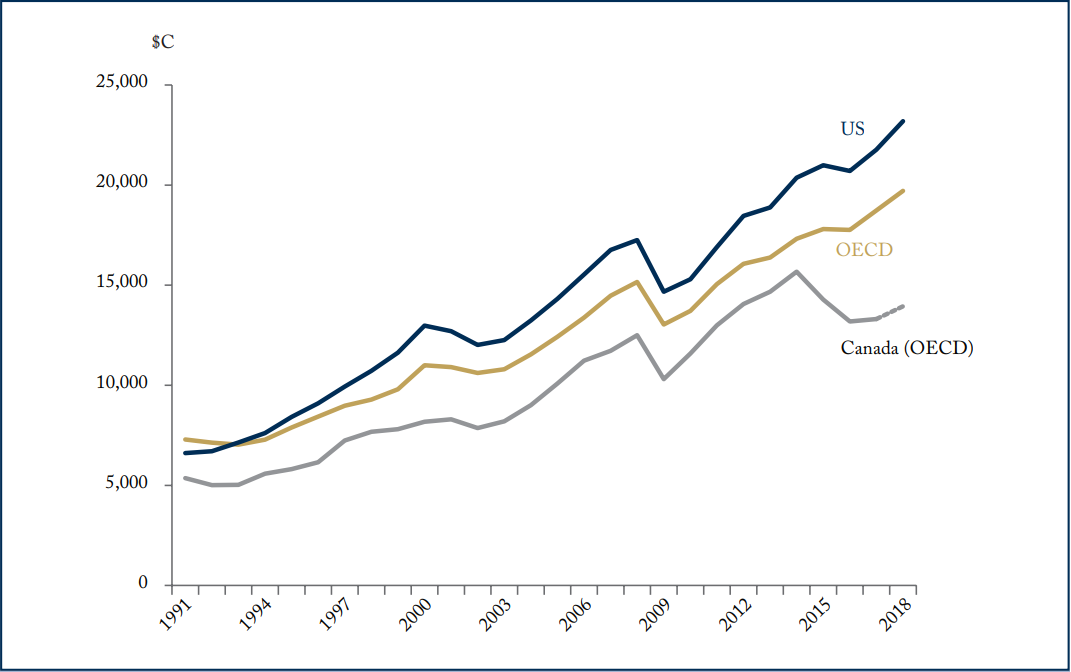 If most of the new money had gone to more productive, GDP-related investment instead of financial transactions, Canada’s level of business investment would not be so far behind other countries and Canadians wouldn’t be facing the fallout from the bursting of a massive housing bubble.